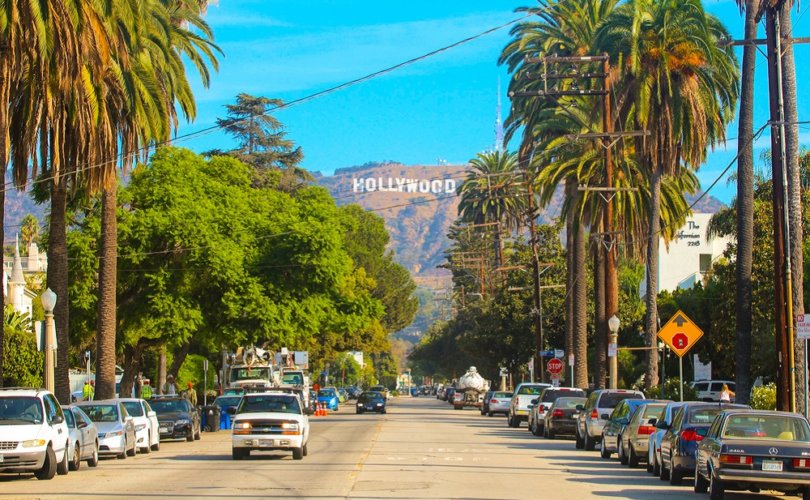 With the mixed bag of enthusiastic locals we used as extras, the atmosphere in the studio felt like a Trump rally. They love Trump and eagerly want to do their part to help him “Keep America Great.” The Trump Train 2020 song official music video will be released early February.

Folks, it is pretty crazy out there in California. We were not in San Francisco, where they give tourists maps to avoid piles of human excrement. We rode past a private home with a rainbow sign stating that all gender identities were welcomed. The restrooms at the San Diego airport car rental center had signs assuring gender-confused men that they are welcome into women's restrooms.

The average gasoline price was around $4.60 per gallon. We pay around $2.40 in West Virginia.

While in California, Robert Kirk, the director of the music video, gave me a sneak peek at his comedy short film, Nightmare in Paradise. Robert's hilarious movie is about a transgender who shows up for a job interview. The interviewer must handle the transgender with kid gloves and extreme caution to avoid breaking laws. Robert is a former prosecutor. The scary thing about his brilliant script is that it is based on existing California laws. Here is a link to watch Robert Kirk's Nightmare in Paradise.

While turning down a pro-life Super Bowl ad featuring abortion survivors, Fox proudly announced its plan to feature the first drag queen Super Bowl ad. Drag queens are a minuscule percentage of the population. Pro-lifers are a huge segment of the population. Why are so many major corporations giving mainstream America their middle finger while bending over backwards to please an extreme tiny minority of counter-culturists?

Joe Biden tweeted, “transphobia is the paramount civil rights issue of the current era.” As a proud American who happens to be black, it offends the heck out of me that a behavior is absurdly deemed the same as the racial discrimination fought by my late dad and his fellow black civil rights pioneers.

If elected, Elizabeth Warren pledges to reverse Trump's ban on transgenders in the military. Warren also vows that transgenders with be well represented in her administration.

Bernie Sanders tweeted, “Transgender rights are human rights. We are going to fight to end all forms of discrimination and violence against our trans family.” Sanders hung a transgender pride flag outside his office. Leading in the Democrat presidential polls, Sanders promises protections for illegals and transgenders, ensuring that they be addressed by their preferred pronouns.

Democrat presidential candidate Pete Buttigieg, who really gets off on kissing his male sex partner on national TV, promises nearly two dozen new initiatives to further the LGBT agenda. Keep in mind that only 3% of the population identify as LGBT.

Transgenders are destroying women's sports, winning every competition hands-down. Hillary Clinton had to backpedal from her statement that cisgenders (real women) have a right to be concerned. Hillary's cowardly retraction of her commonsense statement tells us she will surrender to the transgender agenda if she is ever elected president.

Democrats have forced us to sponsor the murder of 60 million babies against the moral convictions of a majority of Americans. Bloomberg will force us to fund transgender ideology, which is documented to be a mental illness and child abuse.

Bloomberg raves about California, promising to spread its intellectually superior policies across America.

California is a state that seeks to remove all parental rights and ban homeschooling, forcing parents to surrender their children for LGBT, socialist/progressive, and anti-American indoctrination. This is a state that coddles illegal aliens, showering them will freebies unavailable to legal residents, while legal residents struggle to survive. This is a state that has ushered in the resurgence of medieval diseases because vagrants are allowed to set up tent cities and defecate on the streets. Criminals who steal under a thousand dollars' worth of products are not charged.

If Bloomberg or any of his fellow wacko Democrats is elected president, America will immediately fall backward, resuming the economic, cultural, and world leadership decline of the Obama years. An endless list of new perversions will be forced upon us. All who oppose will be shamed, destroyed, and thrown into jail.