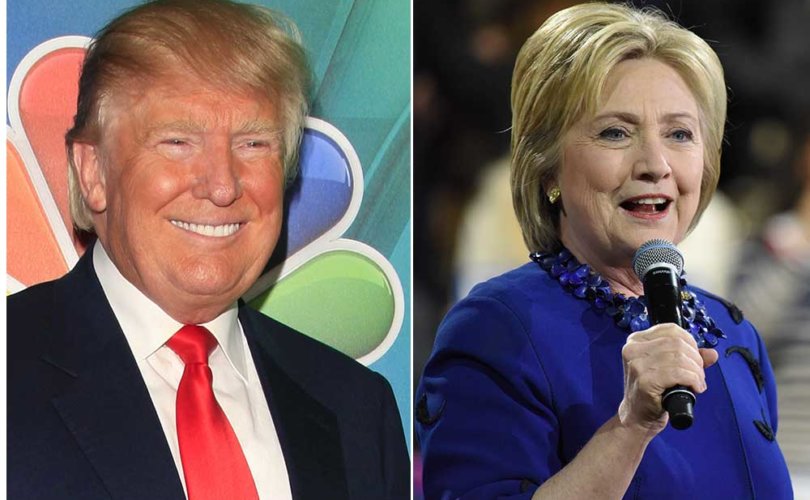 September 30, 2016 (CharismaNews) — I have been asked “the question” so many times regarding Trump or Hillary. By way of background, I have followed every national convention—Republican and Democrat—from the time I was age 9, and have attended most of the GOP Conventions from 1984 to the present. I have watched the news virtually every day from the age of 8. I have never seen anything like what we are observing.

In spite of the unprecedented nature of this election cycle, I will attempt to respond to “the question.” I am not demanding that anyone else share my view. But I was asked. Here is my best attempt to answer as I am able to see things at this time:

1.   The Democratic and Republican party platforms are as different as night and day, in my opinion, as far apart as evil vs. good. The 51-page Democratic platform is the most leftist ever. (I don't care for the “right vs. left” nomenclature. I am far more concerned with “right vs. wrong.”) The Democratic platform contains many points which are anti-biblical. (Time does not permit me here to identify what is meant by “anti-biblical,” which is covered in my new book Well Versed: Biblical Answers to Today's Tough Issues.) It is thoroughly socialistic (a socialist is a communist without a gun). The 54-page GOP platform is one of the strongest GOP platforms ever. A biblically alert person could be comfortable with almost all of it. Party platforms are a big issue to me. Although some “blow off” party platforms, I do not. Nor do many people up and down the ballot who are running for office. This is a serious and very important item. I have a hard copy of both platforms in front of me now. Most people have never checked out what the party platforms say. They should. If a person is not drawn to the “top-of-the-ballot” candidate, they ought to at least consider voting for the candidate attached to the best party platform.

2.   Analogy #1: Both candidates are flawed. We all know that. But permit me an analogy: As a pastor, I would rather deal with a church attendee who is blatant and brash in his sinning than one who is devious, lying, cunning and deceptive. Both are problematic, but one is easier to deal with than the other. If I were a pastor bringing correction to a parishioner, I would prefer dealing with a “Trump-type” any day over a “Hillary-type.” The chances of making progress with the “Trump-type” are many times greater than the “Hillary-type.”

3.   Analogy #2: When my (late) wife's remarkable and much loved oncologist said, “Don't take Carol to that alternative (non FDA approved) treatment.” I asked, “Why not?” He said, “The unknown.” I said, “Doctor, your 'known' is much worse than the alternative treatment's 'unknown.'” I took her to that alternative treatment. One year later that same oncologist went to the alternative treatment doctor to see how it was that Carol had improved so much. While this alternative treatment did not ultimately save her life, it likely stretched two to three years of life to six years of life—by the admission of another one of her brilliant young oncologists who later said, “Without any medical training or scientific fact, you have put together a protocol of treatment that has moved her into the top fraction of 1 percent of survival rates of all patients with Carol's particular cancer. Application of the analogy: Hillary's “known” is considerably worse—many times over—than Trump's “unknown.”

4.   Trump has lots of sins in his past (actually, we all do), and—in the present—says things he should not say. I make no attempt to defend any of the things he has said. There is no need to rehearse the wrong things he has said. We know what they are. He should not have thought or said them. But there is no need to rehash them here. So we won't. But let's turn to the other candidate. Although America has had some scandal-ridden candidates in its history, we have never seen any one major party candidate more constantly scandalous as Hillary (along with her husband). She seems to exceed all previous boundaries for wrongdoing. The scandals just don't stop. In the same way we did not take time to list all of Trump's misstatements, neither will we here rehash the seemingly continuous string of horrific scandals of the Clintons.

5.   Trump is slowly being surrounded by increasingly good people. From time to time, I receive encouraging calls regarding this. Can these good people impact Trump? We will see. In contrast, I see no reason for any encouragement regarding the people who surround Hillary.

7.   This next issue might be one of the most important, but I suspect few will understand its significance. Trump opposes globalism. Hillary thrives on it. Globalism is far more than “geographical” or “eliminating national borders and boundaries.” It is spiritual and demonic at its core. Few—very few—understand this. This is quite likely one of the main reasons why Trump is hated. Do your homework on this one. Think “principalities and powers.” Serious. Extremely serious.

8.   Not voting is not a viable option, contrary to what the “purists” claim. It is not my intention to begin a war of the issue. I know that some radically disagree with this. My view? They have the right to be wrong.

9.   Voting for a third party candidate is—regardless of what is said—a complete “throw-away.” No third party candidate will be elected, or even come remotely close to being elected. And yes, that matters to me. And for the record, the Libertarian ticket—Johnson and Weld—is nearly as bad on many issues as Hillary. When I listen to them, I am stunned people of their ability have ever made it to elective office.

10.   Trump has moved pro-life. Hillary is pro-baby killing, and prides herself on that, and honors the organization—Planned Parenthood—that actually traffics human parts from dead babies whom they have killed. This is below anything we have seen since Nazi Germany. The gall of Hillary! The Clintons have evaded justice for decades and likely will continue to. But they will someday stand before the Great White Throne. They will have to give account of their support of the ripping babies to shreds in the womb. For the record, those who vote for those who support the genocide of pre-borns will also have to give an account.

11.   Trump wants to defend the nation (which is the purpose of government). Hillary has a horrific track record as Secretary of State, and due to hundreds of millions of dollars given to her and her husband's foundation, she is beholden to those who want us dead.

12.   Hillary claims “everything is fine” in America. This defies every single fact, but facts have never been an interest of Hillary's. Trump understands that it is 11:59 p.m. on the “cultural clock.” America is near the end—morally, economically, militarily and, sadly, spiritually. There are very clear identifiable indicators—measurable ones—that America is no longer the world's leading power. That day is over. Hillary will hasten the final destruction. Trump could either slow that down—or possibly, with God's help—reverse it. Maybe.

13.   Trump will address the massive government spending. Hillary will expand it above the existing unsustainable debt the U.S. currently is carrying (almost $20 trillion plus unfunded liabilities to Social Security, etc).

14.   Trump will expose—and I pray, bring down—”the systemic evil” (crony, deceitful, misuse of capitalism) that reigns among many high-dollar lobbyists. Hillary thrives because of them.

15.   Trump will stop the massive overreach of government. Hillary will extend it.

16.   Freedoms come in “threes.” Political freedom, economic freedom and religious liberty coexist together. Take one away and the other two will eventually disappear. One cannot exist without the other two. The genius of America is that it had all three, until recently. Trump fully grasps the loss of religious liberty. I have heard him speak on it in person on several occasions. He knows that economic and political freedoms are evaporating. He will reverse that. Hillary will decimate all three.

17.   Every rational person knows the Supreme Court appointments are paramount. Trump has listed 11 superb potential nominees. Hillary's appointments would snuff out the tiny vestige of the three freedoms that are left (mentioned in the statement above).

18.   I make no excuse for wrongdoing or wrongful, hurtful words from either candidate. Candidly, I want King Jesus. He rules in my heart. And yours too, I suspect. And I want Him to rule here—now. But that day is not fully manifested—yet. In the meantime, we prayerfully, carefully navigate this challenging election season, with great concern that above all, we honor our Lord and Savior Jesus Christ in every arena of our lives, including the voting booth. That is my hope. I believe it is yours as well.

Editor's Note: Dr. Jim Garlow is pastor of Skyline Church in the San Diego, CA area.   Dr. Garlow has written a follow-up article about President Obama's shaky relationship with Israel. You can find that story here.

Reprinted with permission from Charisma News.

* Priest: ‘You might not have a church to go to if you don’t vote the right way in November’
* US priest: Voting for the pro-abort in this election may put ‘your soul…in grave danger’
* The uncomfortable truth about Christian support for Trump
* Donald Trump has undergone a transformation in recent months that many did not think possible
* Don’t buy Satan’s lies: Only one political party aligns with the Church on the most basic issues
* Fr. Pavone on US election: It’s ‘time for repentance’ over abortion, not just debates
* WATCH: Fr. Pavone on why Catholics can’t sit out the election
* Donald Trump v. Grandma Clinton: What's Really At Stake? (Michael Matt)
* A refresher on Catholic teaching about abortion for this US election season
* Kansas bishops: Catholics must vote with ‘catastrophe’ of abortion at ‘forefront of their minds’

One million abortions a year not enough for Hillary Clinton