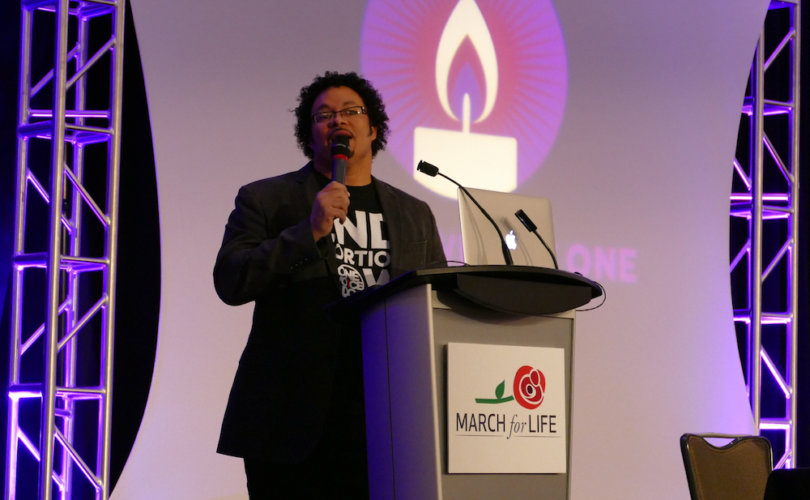 Ryan Bomberger of The Radiance Foundation speaks at the 2017 March for Life Conference in Washington, D.C.Lisa Bourne / LifeSiteNews

April 5, 2019 (Radiance Foundation)  —  I should have been aborted. At least that's what the pro-abortion side believes. I'm always that one percent that is used 100% of the time to justify abortion. My birthmom experienced the horror and the violence of rape but chose to be stronger than her circumstances. Her courage not only enabled me to live but to be adopted and loved in a multiracial family of fifteen. Ten of us were adopted.

Some of my siblings have disabilities including legal blindness, albinism, Bell's palsy,  symbrachydactyly (missing toes), and varying learning disabilities. I have my own disabilities. I'm a sound designer with hearing loss and a creative design professional who is colorblind. But you know who the truly disabled are? Those who think that only the “normal” and the planned deserve to live. Today, I'm happily married to the love of my life, Bethany, the cofounder of the Radiance Foundation, and I'm a father to four amazing homeschooled kiddos. Adoption unleashes purpose. And courage shows us that some of the best things in life are unplanned.

But I'm not equal according to pro-abortion politicians like blackface-slash-KKK-impersonating Governor Ralph Northam. Pro-abortion liberals, nationwide, are transforming their once hallowed mantra of “safe, legal and rare” to just “we heart infanticide.” By the way, Northam's denial about the racist yearbook photos, then admission, then denial, then apology, then defiance shows how easy it is for Democrats to weasel out of pitiful behavior. This is how #fakenews and #fakeoutrage work. It's hard to believe that liberals didn't know about that yearbook photo long before Northam's pro-infanticide performance on WTOP back in January 2019. Funny how the Party of Slavery, Jim Crow, the KKK, and voter suppression (in the form of poll taxes and literacy tests) had to act outraged over their own DNA. Even Planned Parenthood, which poured $3 million into Northam's election campaign, turned on him.

In something that looked like it belonged in the Babylon Bee, Planned parenthood's new President, Dr. Leana Wen, demanded that Northam resign (and I'm all about that resignation), not for supporting and promoting infanticide but for decades-old costume racism. Isn't that like the pot calling the kettle blackface? That's not courage; that's contradiction. Planned Parenthood still daily celebrates its racist founder — Margaret Sanger — who boasted of her speech to the KKK in her own autobiography (page 366.) Planned Parenthood, YOU should resign. You kill more black lives in two weeks than the KKK killed in a century. Abortion is the number one killer in the black community, outnumbering the top 15 causes of death — combined. Planned Parenthood, alone, kills 247 black lives every single day. They're the very definition of systemic racism.

In the last reported year, there were 16,042 abortions of children, of any hue, among residents here in VA. That's 16,042 too many. Despite the decline of total numbers of abortions and abortion rates, nationwide and within our own state, the Left wants to increase the number of abortions and make us pay for it. “MY BODY MY CHOICE!!!” they cry. Well scientifically, no. Of course, science is not the fake feminist movement's strength. And even if that pro-abortion slogan were valid, why are Democrats trying to force my body, my taxes to pay for it??? The Left's abortion radicalism affects us all — female, male, young, old, rich, poor, white, black and every hue in between.

Pro-abortion liberals are always talking about their fake equality but don't believe that we're all created equal. Once again, history brutally repeats itself. The Left's abortion extremism empowers the abortion profiteers, not women.

There's nothing courageous about activists celebrating the killing of innocent human lives and slapping a “reproductive freedom” label on it. It's callous cowardice led by a $2 billion bully that claims to plan parenthood. They don't plan parenthood; they violently end it. And Governor Northam and his pro-abortion cohorts, across the country, want to expand this violence. Prolife Americans won't let this happen.

You may feel alone on this issue on your campus, in your workplace or even at your church. But know this — courage doesn't need a crowd. It just needs a conscience. Courage changes everything. It makes people like me…and my family…possible. My life has purpose! Your life has purpose! And when we choose to be strong and courageous, we enable millions of others to live out their God-given purpose, too.

I shared these words, as one of the keynote speakers, at this week's March for Life in Richmond, Virginia — an historic moment for the state's capitol city. As with so many events, many ask: “What can I do?”

There are so many ways to get involved and show people the love and compassion we all deserve.  Learn about Life issues at Radiance Foundation, Live Action, Life News, LifeSiteNews or Human Defense Initiative. Get politically involved with groups like March for Life or SBA List. Take a prolife stance in middle school, high school or on your college campus through Students for Life. Learn and engage in powerful prolife activism with Prolife Action League, Created Equal or Survivors. Volunteer or support your local pregnancy center. Participate in peaceful prayer and sidewalk counseling with 40 Days for Life. Tell your story as a post-abortive women or man with Silent No More. Support medically and morally accurate sex education (here and here) for teens so they don't have to even face being abortion-vulnerable or pregnancy center clients. Help your church fulfill the James 1:27 mandate (caring for widows and orphans) by bringing in Care Net's incredible Making Life Disciples training and equipping program. Be a mentor and a support to a single mother. Be a fatherhood mentor to a young dad. Don't forget about birthmoms and birthdads, the often-invisible part of the adoption triad; be willing to Talk About Adoption. We can do so much more, as a society, to turn the “unplanned” into a loving plan. My favorite is this: Adopt…be the hope.

Courage is calling you.

Listen to Ryan discuss with Jonathon Van Maren the impact abortion has had on the black community. Click below.