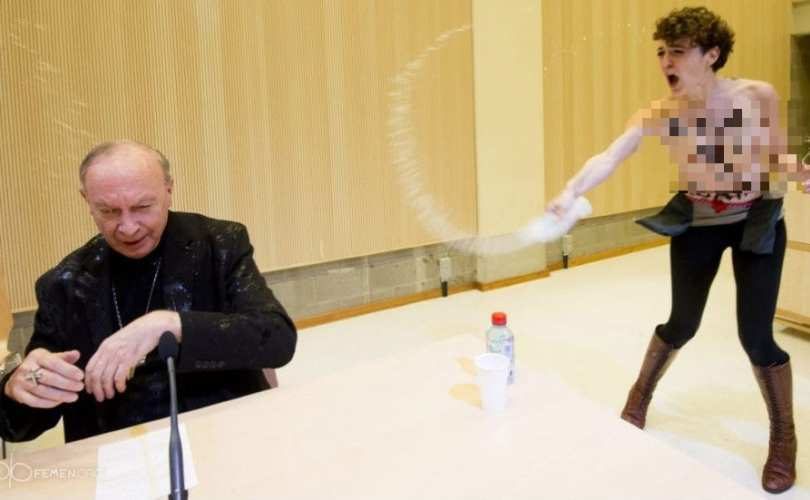 Archbishop Léonard is doused with water by a topless Femen activist in 2013.

October 21, 2016 (LifeSiteNews) — The recent announcement of a consistory of Cardinals in November seems to seal the deal: Archbishop André-Joseph Léonard, the heroically faithful former archbishop of Mechelen-Brussels, will be the first head of that See in 200 years not to be appointed cardinal.

Instead, Francis appears to have waited to appoint Léonard's more progressive successor, Archbishop Jozef De Kesel, who will be made cardinal next month.

According to tradition, Léonard would have donned the red sometime after the 80th birthday of his predecessor, Godfried Danneels, in June 2013, only months after Francis' election to the papacy.

Given the historical status of his archdiocese and the fidelity of his service, Léonard seemed to be one of the most likely candidates to receive the honor, and yet Pope Francis consistently passed him over.

A Dutch Catholic, Mark de Vries, is right in quoting the French interview book in which Léonard speaks about the situation, prior to the recent announcement of the consistory. Asked if we was hurt by not being made a Cardinal, Léonard answered:

Hurt is too big a word. But it did surprise me since it is a tradition of two centuries. In the past, there have been many archbishops of Mechelen who were never Cardinals, but for two centuries it has become a sort of tradition. Should that remain so? When I thought about it, I told myself it didn’t. It is clear that the current Pope wants to appoint cardinals from countries which never had Cardinals to underline their importance, to not have a College of Cardinals, which is too Euro- or Americano-centric. I think that is a good thing.

It was a little surprising. It is a delicate thing to say about myself, but many have said so in my place: pastorally and intellectually, I have done work which few archbishops have managed. […] As far as I am concerned, I have completed my task in a rather original way. […] In short, [not receiving a cardinal’s hat] surprised me, disappointed me a little, but I got over it easily.

The Belgian prelate served in office from February 27, 2010, until June 1, 2015. Pope Francis named his successor, the progressive De Kesel, who made headlines by closing a priestly fraternity instituted by Léonard shortly after taking office. Now De Kesel is rewarded with the red hat.

Though Brussels has fallen into the hands of De Kesel, a protege of the notorious Danneels, Archbishop Léonard can look back on his own impressive heritage. As a learned philosopher and critic of Hegel, he became a member of the International Theological Commission and consequently a consultant for the Congregation for the Doctrine of Faith.

At the same time, he has been an enduring witness of the faith and morality in the public sphere.

One of his first tasks was facing the monumental crisis of sexual abuse cases under his predecessor, Cardinal Danneels. During the investigation by police in the case of the sexual abuse of a child, offices of the diocese were raided. The investigation centered around Roger Vangheluwe, then Bishop of Bruges, who stepped down from office after having admitted to having sexually abused a young boy during the time when Cardinal Danneels was Primate of the Belgian Church.

Showing support for Léonard’s efforts to bring clarity to the situation, Pope Benedict addressed a letter to him in which he said:

At this sad moment, I express my special closeness and solidarity to you, dear Brother Bishops, and all the bishops of the Church in Belgium. […] Thus I hope that justice takes its course, to guarantee fundamental rights of individuals and institutions, while respecting the victims, without preconditions, in recognition of those committed to work with [this Ordinance] and rejection of everything that obscures the noble tasks assigned to it.

Archbishop Léonard also was a clear voice in defense of the Church's most controversial moral teachings, including those against homosexuality and the use of birth control. For this, he was reprimanded by Deputy Prime Minister Laurette Onkelinx after his appointment as well as by gay activists throughout his time in office.

Léonard explained that the Church does not teach that AIDS is a “punishment from God,” but rather that this “epidemic is sort of intrinsic justice, not at all a punishment.” He continued, explaining that homosexuals who are infected with AIDS have to admit that it might be a consequence of their sexual behavior. At the same time, he insisted that “HIV carriers merit respect” and “must not suffer discrimination,” as an HIV/AIDS activist website reported.

At the same time, Léonard was not susceptible to public silencing regarding his stance on homosexuality. He repeatedly called it an “imperfectly developed state of human sexuality which contradicts its [sexuality’s] inner logic.” For these clear words, he was charged with homophobia under Belgium’s “Anti-Discrimination Act” of 2003.

Shocking were the video images of topless FEMEN activists who drenched Léonard with water while he participated in a philosophical discussion with Guy Haarscher on the subject of blasphemy and freedom of speech at the University of Brussels. His witness was inspiring: the Archbishop remained silent in prayer during the whole attack.

Although the red hat of the Cardinals will not crown his head, for his unceasing public testimony and achievements in office — Archbishop Léonard has certainly shown his willingness to spill his heart’s blood for the mission of the Church. He will not remain unrewarded.