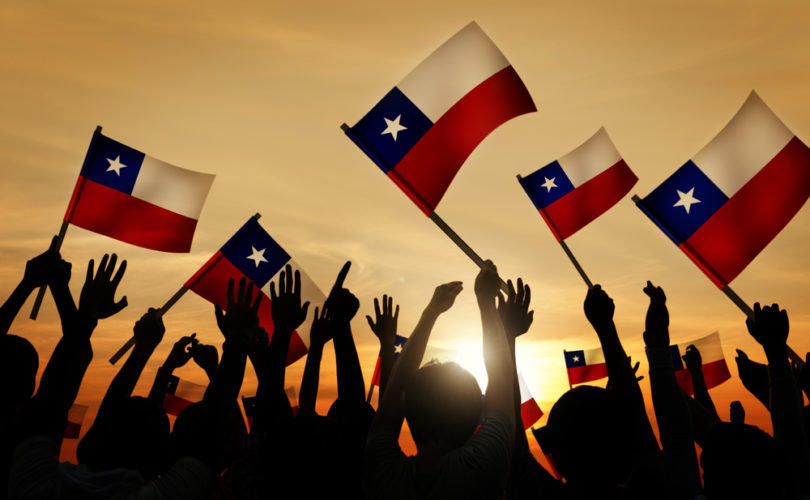 Aug. 3, 2015 (HLI) — Most Christians here in the United States have not heard about a political drama playing out in Chile, a nation that has achieved significant improvements in maternal health even while maintaining strict restrictions on abortion. Reinforcing the claim that the international proponents of abortion are not swayed by evidence that doesn’t fit their narrative, Chileans are again having to fight to defend laws that have protected women and babies, and have very wide popular support in the nation. This week we will see if national sovereignty and Chile’s strong pro-life culture are victorious, or if the pressure brought by wealthy northern nations proves overwhelming for this Catholic nation.

Before Michelle Bachelet of Chile was the first executive director of the United Nations office of Gender Equality and the Empowerment of Women (UN Women), she was the first female president of Chile, serving from 2006 to 2010. Having been re-elected following her 3-year stint at the UN, Bachelet’s current term as president will end in 2018.

While Bachelet served at the United Nations, March 25th (The Catholic Solemnity of the Annunciation) was declared to be the “Day of the Unborn and Adoption of Minors”, in a bill signed into law by then-President Sebastián Piñera. The bill had been justified in part by the Constitution of Chile, which states that: “The Constitution guarantees to all persons….The right to life and to the physical and psychological integrity of the individual. The law protects the life of those about to be born.” Also in support of the bill was the Criminal Code of Chile, which states that abortion is a crime with no exceptions.

Yet the legal protection of unborn children could soon be erased. During her presidential campaign in 2014, Bachelet declared she would seek to decriminalize abortion; a promise she delivered on earlier this year when she announced that she would submit legislation to decriminalize abortion in the cases of danger to the life of the mother, rape, and fetal malformation. Immediately the defenders of human life began to speak out.

Cardinal Ricardo Ezzati, Archbishop of the Archdiocese of Santiago and President of the Chile Conference of Catholic Bishops, told El Mercurio newspaper in February that abortion is contrary to logic and the conviction that the life of the human person must be defended from conception. Ignacio Sánchez, rector of the Pontifical Catholic University in Chile, stated that in their network of health services no abortions will be committed. No fewer than nineteen other clinics and hospitals in the country have also stated that abortion will not be allowed on their premises, and many medical professionals and medical students have asserted that they will not perform abortions.

Also during that time, Jorge Jiménez, past Minister of Health of the Government of Chile, commented that the practice of abortion is comparable to the cases of the ‘desaparecidos’ (disappeared persons) during the 1970s and 1980s, when many were taken away by government forces under then-President General Augusto Pinochet, never to be seen again. Supporting such high level declarations, several pro-life leaders demanded to know if there was any collaboration between national political leaders and International Planned Parenthood Federation (IPPF Chile) in the drafting of the legislative bill on abortion. They have yet to receive an answer.

On March 25, the Chilean Conference of Catholic Bishops issued a statement that contained an analysis and rejection of the legislative bill on abortion, declaring that it is unconstitutional and that the constitutional right to life could not be redefined. Further, in what has become an annual tradition throughout Latin America, several Marches for Life were held on the same date.

This strong statement was reinforced in April when Archbishop Fernando Chomali of the Archdiocese of Concepción and member of the Pontifical Academy for Life stated that abortion is intrinsically contrary to the call in the medical profession to heal and save lives. He argued that in the cases of where the life of the mother is in danger during a pregnancy, the medical professional must do everything possible to save the life of the mother and the child. Also, Monsignor Cristián Contreras, Secretary General of the Chile Conference of Catholic Bishops reaffirmed that the practice of abortion is never therapeutic and will never have the support of the Catholic bishops in the country.

In support of these and other proclamations, Catholic laity organized in May and began an extended pilgrimage of the image of Our Lady of Mount Carmel, Patroness of Chile, in all of the country. The pilgrimage has included visits to Catholic schools, parish churches, communities – wherever Chileans would organize and pray for the bill to be defeated. The last time that this Marian image was taken on pilgrimage in the country was after the terribly destructive earthquake of 2010. Pope Benedict XVI blessed this statue of Our Lady of Mount Carmel of Chile before it began its journey in the country on occasion of the earthquake, as this event marked the bicentenary of the independence of Chile from Spain, which had been entrusted at that time to Our Lady of Mount Carmel.

In June 2015, a large group of Chilean women traveled to Vatican City and gathered in Saint Peter’s Square to manifest their opposition to the legislative bill on abortion, on the day and hour that President Bachelet was paying an official visit to Pope Francis (It has been announced that in 2016 Pope Francis will carry out an apostolic visit to Chile). Afterwards, the Commission of Health of the Chamber of Deputies of the National Congress of Chile abruptly announced that the hearings on the legislative bill on abortion were to end immediately. The announcement was not received well by many civil society organizations that were waiting to provide their testimony at the request of President Bachelet.

On July 7, the Commission on the Family of the Chamber of Deputies requested that a vote on the legislative bill on abortion be postponed until August 4, in order to prepare amendments that would allegedly protect maternal health. So tomorrow the people will get to have their voice in this matter, even as the airwaves are filled with advertisements financed from abroad, in support of Bachelet’s effort to see abortion laws liberalized.

Mario Rojas, HLI’s regional director for Latin America, spoke for many when he affirmed the Catholic bishops of Chile and the Chilean faithful: “The people of Chile are carrying out noble and heroic efforts to protect the life of their unborn children. We must not allow for the Chilean unborn children to become numbered among the ‘desaparecidos.’”