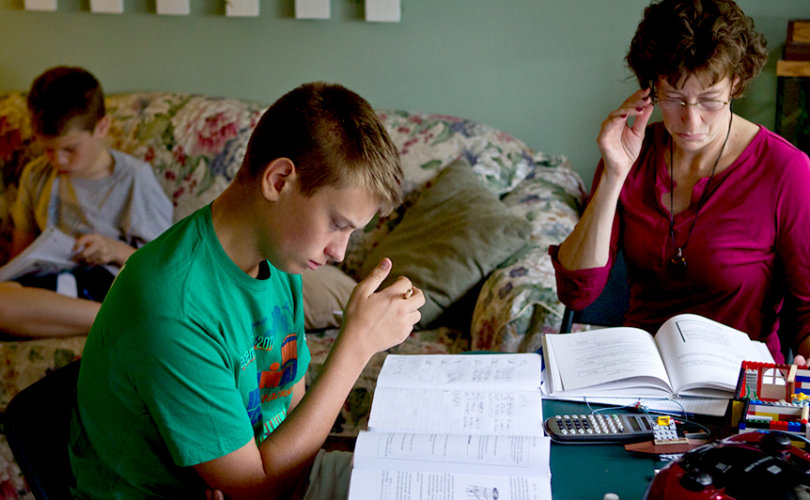 Shane McGregor, 12, left, and Bruce, 17, work in the living room on their coursework while their mother and teacher, Deanna, reviews more curriculum for her children's homeschooling.Ken Harper/Creative Commons

May 19, 2016 (DailySignal) — In North Carolina, the number of homeschoolers has now surpassed the number of students attending private schools.

That statistic may seem shocking if you’ve been a stranger to the growth of the homeschooling movement, which has rapidly increased in recent decades.

In 1973, there were approximately 13,000 children, ages 5 to 17, being homeschooled in the United States. But according to the National Center for Education Statistics, as of the 2011-2012 school year, that number has grown to almost 1.8 million or approximately 3.4 percent of the school age population. Other sources report numbers well over 2 million.

In the Tar Heel state alone, homeschooling has increased by 27 percent over the past two years.

Those are pretty impressive numbers for a movement considered “fringe” not that long ago and that has only been legal in all 50 states since 1996.

So, why are more parents making the choice to homeschool? As with many decisions, it’s rarely one single factor. The Department of Education, which surely isn’t happy with the trend, has tracked the issue since 2003. According to its findings:

And my guess is when the figures are reported related to the past two years you’ll see the number of parents citing “dissatisfaction with academic instruction” spike with the growing uprising against Common Core and national standards. Those who run local homeschooling groups in North Carolina say Common Core is a big factor.

Naturally, those representing the public education establishment don’t find homeschooling up to their standards. The National Education Association, the country’s largest teacher’s union, declared in a 2011 resolution: “The National Education Association believes that homeschooling programs based on parental choice cannot provide the student with a comprehensive education experience.”

But, there is quite a gap between what the NEA believes about homeschooling and the actual results from homeschooling. According to Education News:

Recent studies laud homeschoolers’ academic success, noting their significantly higher ACT-Composite scores as high schoolers and higher grade point averages as college students. Yet surprisingly, the average expenditure for the education of a homeschooled child, per year, is $500 to $600, compared to an average expenditure of $10,000 per child, per year, for public school students.

What is not calculated in the cost line above for homeschooling is the time spent by a parent teaching. But the bottom line is still the same – overall, homeschooling costs less than public education and produces better results.

Add that to the growing list of reasons fewer children are getting on a school bus this year.