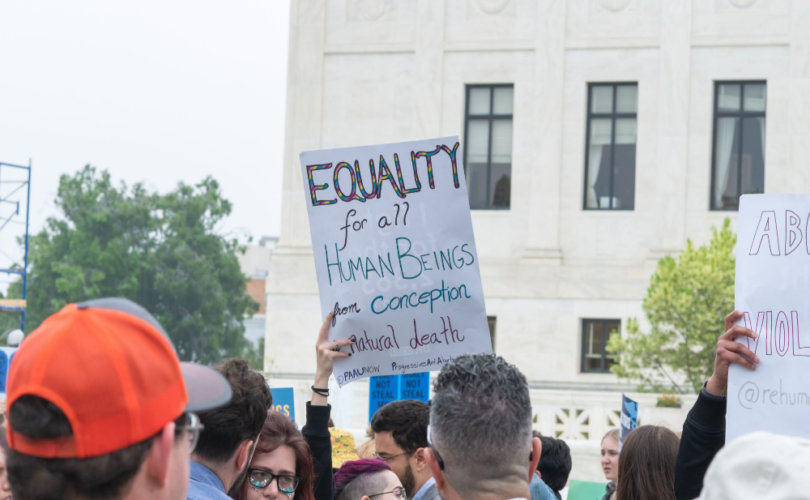 (LifeSiteNews) — The overthrow of Roe v. Wade is no small thing. It is the greatest victory so far in what Pope St. John Paul II called the “great campaign in support of life.”

But it must not be our last.

While we continue to work for the legal protection of the human person from conception onward in every state, we also have a duty to set our sights on other threats to human dignity – which have their own political “Roe’s” serving as obstacles to the Great Campaign. As Fr. Frank Pavone told me in a recent interview on the Jason Jones Show: Overturning Roe opened the door to the culture of life, but we still have to walk through that door.

What does walking through the door to the culture of life look like?

For all their “woke” progressive rhetoric about minorities, our largest corporations partner knowingly with China’s Communist Party (the CCP), and use the populations they’ve enslaved to make the things we buy from Amazon and brick-and-mortar supermarkets in America.

Our entertainment industry, led by giants like Disney, bow to the genocidal racialism of the CCP, erasing black actors from their Chinese-language movie posters, and even keeping quiet as they film on location with concentration camps within sight of their film crews. American sports associations, team owners, and TV networks similarly turn a blind eye to the CCP’s atrocities.

Our Great Campaign holds that each one of CCP’s victims is endowed with incomparable dignity and worth, and that we have a duty to live in solidarity with them.

We have to call on our elected officials to cut off the CCP, and pressure corporations to do the same, until the genocide is finally defeated.

For decades now, politicians have bickered over border security as a partisan and prudential issue instead of as a question of fundamental human rights. America’s Catholic bishops, meanwhile, have shamelessly modeled their rhetoric after that of the cynical ruling class – making themselves complicit in the abuse of “the least of these brethren” just to ingratiate themselves with the powerful. And it shouldn’t surprise us. Around 40% of the United States Conference of Catholic Bishops’ revenue comes through federal contracts – making the bishops de facto employees of unelected bureaucrats in the political establishment.

But while cynical corporate leaders in America continue to get their supply of cheap illegal immigrant laborers, sex traffickers and drug cartels have built their own business models around the porous and chaotic border.

Even in the smoothest and most successful cases of illegal immigration to the U.S., the migrant himself is trapped in an underground economy, with no access to the labor and safety laws, the insurance, or even the minimum wages that American-born workers take for granted.

And all this is to say nothing of the fentanyl drug epidemic that operates across the U.S.-Mexico border, killing tens of thousands every year – especially among the millions who have given up finding livable employment as their wages are driven down by the illegal immigrant workforce.

If we mean what we say about the worth of the human person, we must work to end that status quo, secure our border, and implement a nationwide employee verification system to protect the tens of thousands on both sides who have been losing their lives and their dignity for far too long.

Rejecting wars that only serve the interests of the powerful

Again and again, powerful Americans and their global allies use our servicemen and women to topple regimes that get in the way of Western elite interests. Once a region is crippled, our leaders leave them at the mercy of ruthless warlords like ISIS and Al Qaeda in Iraq and Syria, or the Taliban in Afghanistan.

I’ve seen firsthand the carnage and the ruin. I traveled to Iraq in the wake of America’s disastrous invasion and withdrawal. I saw whole towns left smoldering and smelled the burning flesh of victims, including children. I met with fathers whom American elites left helpless as their wives and daughters were wrested from them and marched off to rape camps.

My organization The Vulnerable People Project (VPP) is working to sustain the lives of the thousands of innocent Afghans – friends of the U.S. – left for dead by the Biden administration’s botched withdrawal.

Things aren’t much better in Ukraine, with VPP helping to house and protect thousands of Ukrainian women and girls while sex traffickers try (and sometimes succeed) to lure them into rape networks along the Polish border.

Meanwhile, Western leaders have abandoned all efforts to deescalate the confrontation with Russia – and pressured Ukraine to do the same – risking a global nuclear exchange.

This too is the culture of death – a worldview that plays reckless games with millions of innocent human lives.

Some who call themselves pro-life are tempted to reject the broader mission of the Great Campaign. We have to ignore most offenses against the human person, they argue, because they are not “like and commensurate” to abortion, and will only distract from the urgent need to protect the preborn.

In fact, these other threats to the human person are not only like and commensurate to abortion – they are a direct result of it.

St. John Paul the Great spoke prophetically about the line of causation between what we call the “life issues” (abortion and euthanasia) and the horrors that have cropped up since those violations of human dignity took root in our society.

I’ve been fully onboard with Pope John Paul II’s Great Campaign since the moment he called for it. Inspired by his 1995 encyclical Evangelium Vitae, I purchased the domain TheGreatCampaign.org as soon as I could get my hands on it. And the pope’s words were also the inspiration behind my “Whole Life” initiative.

Less than a decade after Evangelium Vitae, it became clear to me that John Paul II had prophesied a vital truth: that building a whole “new culture” would become a much broader and more ambitious project than simply removing Roe v. Wade.

As if he foresaw the growing menaces of the CCP, border insecurity, and war that we face today, he spoke of the far-reaching consequences of Roe’s normalization of abortion:

The end result of this is tragic: not only is the fact of the destruction of so many human lives still to be born or in their final stage extremely grave and disturbing, but no less grave and disturbing is the fact that conscience itself, darkened as it were by such widespread conditioning, is finding it increasingly difficult to distinguish between good and evil in what concerns the basic value of human life.

What is “urgently called for in response to those threats is a general mobilization of consciences and a united ethical effort to activate a great campaign in support of life,” he concluded. “All together, we must build a new culture of life.”

We have defeated Roe. But we now have other Roes to defeat: the “widespread conditioning” that has dulled the conscience so severely that it cannot see the urgency of any threat to life.

That conditioning includes the rhetoric of our wicked or misled opinion-makers – from “woke” corporate spokesmen to career politicians to Catholic bishops.

The Great Campaign now must defeat those who claim our economic partnership with China is about a “shared future,” or about “equity,” when in fact it is a direct collaboration with mass rape, genocide, and forced abortion. These rhetoricians are no better – and no less dangerous to human life – than Roe itself.

Those who have the gall to shame advocates of border security as anti-immigrant, when in fact they are themselves the ones perpetuating horrendous crimes against the human person by keeping the border in chaos, are another Roe we must overturn.

And the omnipresent War Party, together with its flacks in corporate media, who sell war after genocide-inducing war with claims of defending freedom and democracy – this Roe too must go.

During Roe v. Wade’s 50-year reign, the culture of death grew much greater than Roe itself. It’s a leviathan and a hydra, with unnatural heads and tentacles reaching far beyond the abortion industry and into every corner of our civilization.

The last thing we should do after our victory against Roe is retreat.

Instead, we must advance – or, in the words of Fr. Pavone, walk through the door.