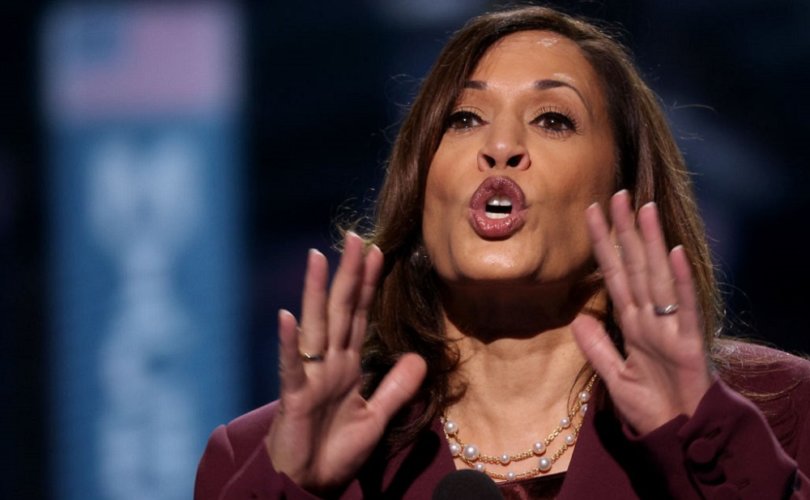 August 20, 2020 (American Thinker) — Last week when Joe Biden officially announced Kamala Harris as his running mate on August 12, 2020, Harris made what amounted to one of the most dishonest speeches by a vice presidential candidate in recent memory. “This is a moment of real consequence for America. Everything we care about, our economy, our health, our children, the kind of country we live in, it's all on the line,” she said. Harris, who appears to have been honing her acting skills during the pandemic, unleashed a bevy of emotions during her remarks, as she went from “cheerful” to “empathetic” to “nostalgic” to “indignant” and finally back to “cheerful,” all in a matter of seconds. In a desperate attempt to portray herself as humanizing, relatable, and down to earth, she instead reminded us all why the robotic Hillary Clinton was seen as untrustworthy and was immensely unpopular. Duplicity aside, perhaps the only detail of Harris's speech more cringe-worthy than her insincerity was her inability to tell the truth about virtually anything.

Harris heavily criticized President Donald Trump's handling of the coronavirus, blaming him for the death toll, the economic contraction, the high unemployment rate, the closure of schools, homelessness, hunger, and poverty. “The case against Donald Trump and Mike Pence is open and shut. Just look where they've gotten us, more than 16 million out of work, millions of kids who cannot go back to school, a crisis of poverty, of homelessness afflicting black, brown, and indigenous people the most, a crisis of hunger afflicting one in five mothers who have children that are hungry and tragically, more than 165,000 lives that have been cut short, many with loved ones who never got the chance to say goodbye.”

Aside from the fact that Trump has been a huge advocate for the reopening of schools, Harris did not mention that seven of the top ten states with the most COVID deaths are run by Democrats, including New York, which has more deaths than Texas, Florida, Georgia, and Arizona combined. Not only was N.Y. the hardest hit state in the U.S., but it has far more deaths per million, when compared to any other country, at 1,692. By comparison, the country with the next highest death toll per million residents is Peru, at only 796. Harris also did not bother to explain how Trump was responsible for the 32,920 deaths in New York State, considering that it was Governor Andrew Cuomo who chose to allow seniors who tested positive for the virus to return to nursing homes, resulting in thousands of avoidable deaths. The state's death toll for nursing home residents is listed as 6,600, but the official number is likely significantly higher. The AP reported that the real number may be as high as 11,000, with some estimates indicating that it could be closer to 14,000, considering that 21,000 nursing beds are currently vacant, compared to just 13,000 from one year ago.

In addition to ramping up testing, and sending thousands of ventilators to the state of N.Y., Trump allocated 350 million dollars to the U.S. Army Corps of Engineers for construction of alternate care facilities in N.Y., including sending the USNS Comfort ship and turning the Javits Center into a military field hospital. For what it's worth, Cuomo praised Trump back in April at the time, when his state was in desperate need of the president's help, saying, “He has delivered for New York. He has.” Harris did not bother to ask Cuomo or Mayor Bill de Blasio why they chose not to efficiently use the resources that the federal government provided them with. None of those facts fits into Harris's narrative, so instead she moved ahead and blamed Trump for an economy that is recovering quicker than many economists predicted.

“The president's mismanagement of the pandemic has plunged us into the worst economic crisis since the Great Depression,” she said. The ability to create an alternate reality is nothing new for Harris. This is the same person who said the Trump economy was failing a year ago, at a Democratic debate on June 28, 2019. “You know, this president walks around talking about and flouting his great economy, right? My great economy[.] … You ask him, well, how are you measuring this greatness of this economy of yours and they point to the jobless numbers and the unemployment numbers… Working families need support and need to be lifted up, and frankly this economy is not working for working people.” At the time that Harris made those factually incoherent remarks, the unemployment rate sat at a robust 3.7 percent (the 16th consecutive month that it was at or below the 4 percent threshold), African-American unemployment stood at a solid 6 percent, Asian-American unemployment was at 2.1 percent, 192,000 new jobs were created each month over a twelve-month period, and average hourly earnings rose by 3 percent from the previous year. In other words, when the U.S. economy was thriving and perhaps stronger than at any point in our history, Harris wanted Americans to believe that we were still living in the Great Depression.

Harris also bizarrely compared COVID-19 to Ebola. “It didn't have to be this way. Six years ago, in fact, we had a different health crisis; it was called Ebola. We all remember that pandemic, but you know what happened then? Barack Obama and Joe Biden did their job.” As of this writing, the coronavirus has killed 775,000 people worldwide, and 21,927,114 people have tested positive for the virus. Ebola, by comparison, killed 11,310 people worldwide, while only 28,616 people tested positive for it. To put it in perspective, nearly as many people have tested positive for the coronavirus as the total number of people residing in Sri Lanka, a country that has the world's 58th largest population at just over 21 million. Meanwhile, roughly the same number of people who can attend a football game at Princeton Stadium (27,800) tested positive for Ebola.

The Democratic vice presidential candidate also professed her supposed patriotism and love for the country by calling the U.S. a country rooted in institutional racism. She praised the “Black Lives Matter Movement,” while failing to condemn violent protests; the rioting; the looting; the burning of businesses, churches, and courthouses; and the destruction of property that has swept across major cities, including Portland, Seattle, Minnesota, Chicago, New York City, D.C., and many other places. “We're experiencing a moral reckoning with racism and systemic injustice that has brought a new coalition of conscience to the streets of our country, demanding change,” she said. The beneficiaries from this “moral reckoning,” or non-social distancing exercise that has made our streets much less safe was not something Harris was willing to explore.

Harris also claimed that she, along with Joe Biden, would bring the jobs back: “We'll create millions of jobs and fight climate change through a clean energy revolution, bring back critical supply chains so the future is made in America, build on the Affordable Care Act.” Harris and Biden somehow plan on increasing employment while raising taxes by more than three trillion dollars, including increasing the marginal, federal, and payroll tax rates, and eliminating thousands of jobs in the energy sector if the “Green New Deal” is implemented. Harris spoke of implementing many of the things that Trump not only talked about, but already succeeded in accomplishing before the Chinese virus struck the world. All of these outright lies might explain why Harris was forced to drop out of the presidential race last December, after running her campaign into insolvency coupled with her anemic poll numbers. Not to worry: The mainstream media continue to tell us Harris is not only a moderate, but much more exciting, and invigorating the second time around. She is none of those things, but one constant remains: she is as dishonest as ever.