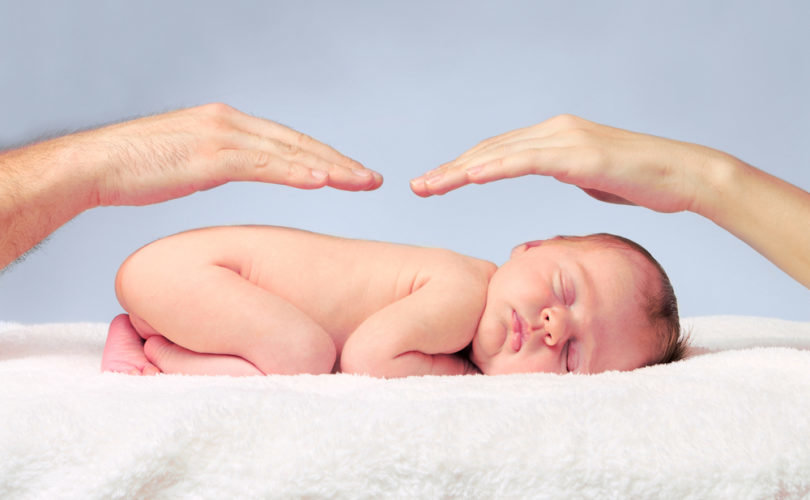 February 19, 2015 (LifeSiteNews.com) — Indiana is about to make history.  On December 28th of 2014, this story appeared in the Indianapolis news:

Police are investigating the death of what appeared to be a newborn girl whose body was found Sunday afternoon at Eagle Creek Park on the Northwest side. The baby was found near the 8200 block of Wilson Road, about 30 yards from the parking lot. She was wrapped in a blue sweatshirt with a logo that says, “Aviation Maintenance Vincennes University-Indianapolis,” according to the Indianapolis Metropolitan Police Department. A hiker found the baby about 4:30 p.m. She was pronounced dead at the scene. Police said the infant was at least a day old.

Linda Znachko, of He Knows Your Name Ministries, later claimed the baby girl and Monica Kelsey, of Safe Haven Baby Boxes helped in naming her Amelia Grace Hope.  On January 17th Amelia Grace Hope was given a beautiful memorial service and burial place to honor her short life.  The death of this newborn girl was so senseless, and this child certainly deserved better than to be found in the woods frozen.

Monica Kelsey has been tirelessly fighting to make sure that young women are aware of the Safe Haven Law in Indiana which states that any responsible adult may give custody of a baby less than 30 days old to any hospital emergency room, police station or fire station in Indiana.  The law which was enacted in 2000 after an abandoned baby died in a snowdrift outside Community Hospital North that year, allows a person to give up an infant anonymously without fear of arrest or prosecution.  According to Dawn Geras of The Safe Haven Alliance, 13 babies have been relinquished utilizing the Safe Haven Law in Indiana.  During this same time, 33 babies have been abandoned across the state, of which 13 did not survive.

This means that even with the Safe Haven Law in effect, babies like Amelia Grace Hope are being abandoned by their mothers in Indiana and across the country.  Many believe that these mothers are desperate and afraid of the authorities and need anonymity in order to relinquish their infants.

While working in Cape Town, South Africa, reaching out to women in maternity homes and pregnancy clinics, Monica Kelsey came across an organization that was meeting the needs of these mothers who were too afraid to relinquish their baby in person.  Living Hope had placed in the entry way of a local church a “baby box”.  This climate controlled box, which locks as soon as a baby is placed in and the door is closed, immediately triggers a call to the local Fire and police and volunteers from the church.  The box can only be opened from the inside of the church, the fireman and police arrive within minutes as well as the volunteers from the church and the baby is retrieved by the authorities.  There is a hot-line for emergency as well as clear instructions on the box itself.  Monica asked how many babies had been saved since the box was installed, and they said 7 babies to date (approximately 4 years) and many more women received help by calling the hot-line who may have otherwise abandoned their babies.

Monica felt compelled to see this baby box brought to the United States.  Kelsey, who is a fire-fighter/paramedic in the Fort Wayne area, and who was herself abandoned at birth and later adopted, has fought tirelessly to see this vision of a safe place for babies become a reality.  On February 18, the Public Health committee in the Indiana House unanimously passed HB 1016, brought forward by Representative Casey Cox, spear-headed by Monica Kelsey, president of Safe Haven Baby Boxes, a 501(c)3 in Indiana. This bill will allow the Safe Haven Baby Boxes to be operating across the state of Indiana with oversight from the Health Department as well as local police and fire authorities. The full House is scheduled to vote on the bill on February 24 with the Senate to follow.

Monica Kelsey believes that if even one life can be spared the horror that Amelia Grace Hope had to endure, it is worth all of the blood, sweat and tears that have gone into this mission.  After every other avenue to get help to these mothers fails, the Safe Haven Baby Box is the last line of defense to save an innocent child from abandonment and exposure. Indiana is paving the way for the rest of the country to provide a safe place and help for these precious babies.