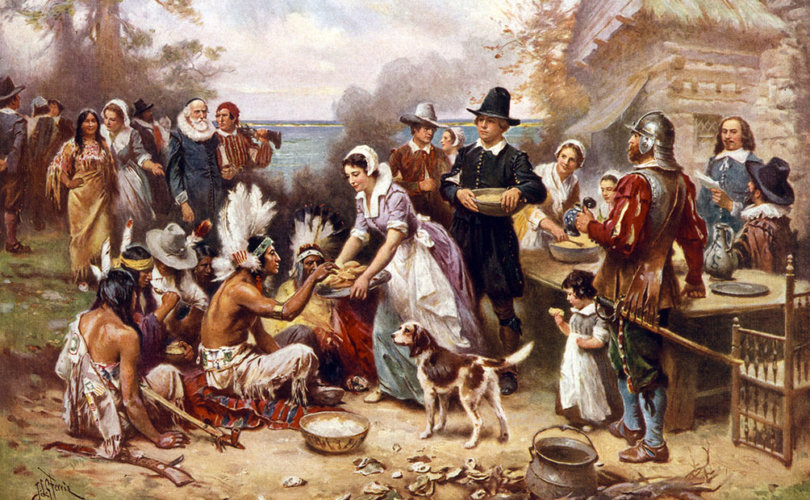 November 28, 2019 (American Thinker) – Just days before our national Thanksgiving holiday, a report explained that Millennial students in their wisdom say, “It's not okay to celebrate Thanksgiving.”

What would we do without these young people correcting the rest of us, the fossil generations?!

According to The College Fix, college students think Thanksgiving represents “oppression” because it is “based off of the genocide of indigenous people.”  They see Thanksgiving in terms of the “themes of oppression and colonization.”  More to the point, with the focus on eating a “bunch of food,” Thanksgiving is “just a bunch of capitalist b——-.”

Some of the students “believe most American holidays are rooted in oppression.”  Others see Americans celebrating “unethical holidays.”  A few proclaim that “no holidays with religious connotations should be observed.”

No wonder today's students have such warped views of life; most have no grounding in history.  They do not know, for instance, that half of the Pilgrims who braved the storms of the North Atlantic for two months in early winter died before the feeling the warmth of summer.  A few died at sea before they were able to leave the Mayflower.

They have little to no appreciation of the fact that throughout most of history, life for all but a few has been the struggle for bare survival.  Thus, they cannot understand the fact that some Pilgrims were willing to endure being indentured servants for the desperate hope of an opportunity for a better life after they worked off the cost of their passage.  The thankfulness of the Pilgrims was rooted in these harsh realities, something today's students should be thankful to have never experienced.

It's not enough that Thanksgiving is already being swallowed up by Halloween and Christmas.  Before the Halloween candy is all gone and the jack-o-lantern candles are blown out, Christmas paraphernalia is displayed in stores, and Christmas lights go on around neighborhoods.  Now we have a whole generation who cannot be bothered to express thanks for what they already have before making out a list of expensive items they want at the Black Friday sales that, this year, begin Thanksgiving afternoon.

I grew up among people for whom getting a college education was a rare privilege.  When my father returned from serving in the Marine Corps during WWII, the G.I. Bill enable him to go to college, the first in his family to do so.  I felt incredibly blessed that my parents considered it important enough to sacrifice to send me to college.  That was a gift, and it was not to be wasted; I was expected to do my best and to take advantage of every opportunity to learn, enrich my mind, refine my taste, and work part-time.

How arrogant are today's students to think that they are above thanking God for the blessings that they enjoy in such abundance without having really earned any of it through their own efforts?  How dare they disparage those early settlers who cut their way through forests and blazed trails across mountains, facing deprivation, dangers, and hunger such as today's young people have never experienced?

Generally, Americans from the past who established and celebrated Thanksgiving were the “salt of the earth,” the “backbone of our community,” and the “elders of the church.”  How dare these privileged college students look down their noses at those who made it possible for them to go to college with a car, smartphone, computer, and spending money as well?

How privileged they are!  How ungrateful they are!

Those Millennials interviewed and quoted in the report by The College Fix and the thousands who share their skewed beliefs need to be reminded that their ideas are not the last word.  They need to read Proverbs 4:7, which reminds that “Wisdom is the principle thing; therefore get wisdom and with all thy getting, get understanding” (King James Version of the Bible).

I would also suggest that those Millennials need to go back to some basic “understanding” of Thanksgiving.  The history of Thanksgiving in the U.S. is inextricably linked to religion.  The earliest celebrations started in the church with the Puritans in the 1600s.

George Washington, as president on November 26, 1789, set aside Thanksgiving as “a day for public thanksgiving and prayer, to be observed by acknowledging with grateful hearts the many and signal favours [sic] of Almighty God.”  Then in 1941, Thanksgiving, to be celebrated on the fourth Thursday in November, became an official federal holiday.

In 1963, President John F. Kennedy reiterated the importance of the forefathers establishing Thanksgiving as a time set apart to express thanks for numerous blessings; he ended with the forefathers' stressing the need to be thankful for “the faith which united them with their God.”

It has become fashionable to declare that America is not a Christian nation.  In fact, even in 2019, as the percentage has decreased, the Pew Forum reports that fully 70.6% of American adults still identify as Christian.

Some people like to claim that the U.S. was not founded as a Christian nation.  The Puritans most certainly “envisioned a government that would promote and encourage Christianity.”  Even our education system was grounded on that same bedrock foundation, with “all but two of the first 108 universities founded in America” being Christian and established to educate the clergy and build the church.

Those early privileged students who were able to get a much valued college education were taught that their purpose was “to know God and Jesus Christ” and to live their lives following “the moral principles of the Ten Commandments.”

The nation's universities have wandered into a barren wilderness, far from that purpose and those goals.  Many of today's students are poorer for it; many earn credentials but are not on a path to a life with meaning and purpose.  Many lack an understanding of history; certainly, in all their so-called “learning,” they have not gained wisdom or understanding.

Thanksgiving in America is a holiday that is both religious and secular.  In recent years, we have let the secular overshadow — even obliterate — the religious significance of the day.  Only a few celebrations involve time for sincere prayers of gratitude for all the blessings that we enjoy in this great country.

Sadly, one of the biggest points of division in the country is whether America truly is a great nation.  We should not be surprised in such a climate to find our young people are cynical and see the American past through a distorted lens that sees only oppression and colonialization.

Our Thanksgiving, though, provides an opportunity for family and friend groups to come together to share laughter and fellowship.  The traditions associated with the holiday — nationally televised parades in major cities in the morning, everyone gathered around the dinner table for a feast of turkey and all the trimmings around noon, and then, in the afternoon and evening, folks gathered around the television watching football games or movies — are commonly shared experiences across the culture, no matter what state, which religion, or what generation.

But we must not let the primary reason for Thanksgiving get lost in the overeating and the family/friend fun and togetherness.  In its origins, Thanksgiving was, first and foremost, a day set aside to thank God for allowing us another year of life.

It is a day for us to humbly acknowledge that God is the source of our blessings and of comfort in our sorrows.  He is the Guide and Companion who walks with us through our difficulties as well as the one whose wisdom ultimately lights and directs us on right paths.

What George Washington was thankful for might shock you