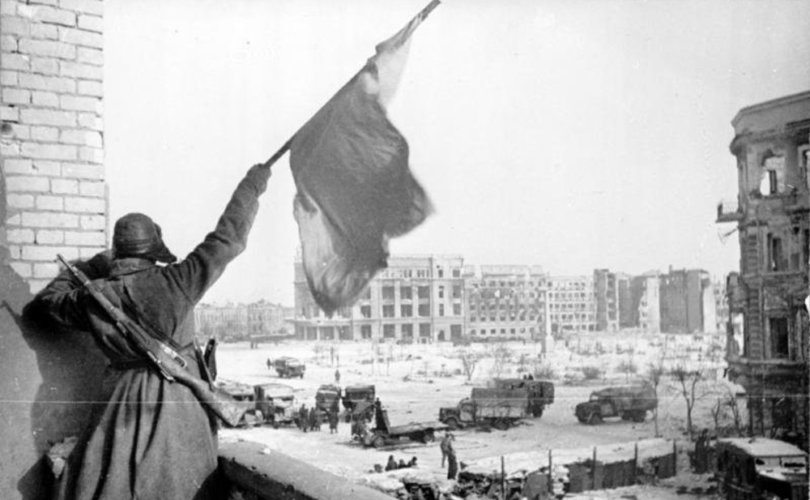 The “phony war” has ended. There is now to be a vote May 25 on whether Ireland retains its pro-life Eighth Amendment to the Irish Constitution that protects the unborn.

A battle is about to commence.

On one side, there is a political elite, a compliant media and the power of the abortion industry worldwide. Opposing it, there is the Irish pro-life movement. The odds against that latter winning appear slim. From the outside, the struggle seemed unequally weighted, a veritable David versus Goliath.

The political establishment has quietly, and deliberately, walked away from any semblance of a debate on abortion. All the main political parties are either in favor of repealing the Eighth Amendment or mutter about “leaving it to the Irish people,” of “letting the people decide.” They know that the “people” will decide on the information that they are given in the run-up to the vote. The politicians also know perfectly well that the indigenous media providing that information are fully in favor of repeal. This is all part of the plan.

The politicians repeat that abortion is a private matter, and then promptly tell voters to vote “yes” for repeal of the constitutional protection for the unborn. The ruling Fine Gael party mouths platitudes about the vote on abortion being a matter of “conscience.” Woe-betide anyone, however, in that party who campaigns too vigorously for a “no” vote. In fact, woe-betide anyone in Irish politics today who appears to be unequivocally pro-life. This is the not too subtle undercurrent to the political discourse, such as it is: the Irish political establishment has decided that abortion is going to be made legal. The endgame here is obvious, that is to move the pro-life position to the margins, or beyond, if this can be done.

But then the referendum has always been about pushing into oblivion any remnant of a nation’s pro-life past. The constitutional safeguard for the unborn — Article 40.3.3 — does not harmonize with the future as envisaged by the political masters of the Irish Republic. Fully signed up to the European project, whatever that really means, Brussels does not take kindly to such constitutional safeguards as Article 40.3.3. If in any doubt about this, just ask the people of Malta, for that island is next in line for the striking down of the last vestiges of pro-life legislation in Europe.

Many have waited for this moment that Ireland now approaches. They have watched from the wings. With stealth and cunning, those who wish to introduce abortion into Ireland have been preparing a heady brew – one that is political, judicial and stirred by the media. It is now time for the Irish electorate to drink from this bitter brew. For years, in courts and in the Irish Parliament, there has been a chipping away at the outright ban on abortion. But nothing will satisfy some other than abortion on demand. Others talk of a “limited availability” of abortion when “the Eighth” is removed. They fool no one but themselves. Look around Europe and elsewhere, look in particular to Ireland’s closest neighbor, Great Britain. Once abortion is introduced in a limited form, it is never enough for those who want abortion on demand, and always too much for those eradicated in the womb and the mothers who bear invisible scars that society now tells them do not exist.

Be under no illusion, there is nothing “limited” about even one life ended.

The catch phrase of the pro-abortionists is that Ireland must stop “exporting” its problems. By this is meant that Irish women must be allowed to have abortions in Ireland, as opposed to traveling to England to do so. They miss the point. Abortion is the problem never the solution to an unwanted pregnancy. Furthermore, there is little talk of how much abortion – its “providers,” its “clinics,” its “counseling services,” its “doctors,” — will all have to be imported in some shape or form into Ireland. If the repeal does occur, then what follows will be big business for some. There are certain entities that know this, and now wait silently on the sidelines, but, thereafter, will move center stage. Then we shall watch as a series of multinationals shape Irish political debate, Irish society and eventually the very culture of the island.

This May, the much anticipated abortion referendum shall take place. It is the moment of truth for Ireland. And, as with a then nomadic nation wandering in the desert many centuries ago, a choice will be presented: to choose life or to choose death.

I heard a commentator say that this referendum was Catholic Ireland’s last stand. An “Irish Stalingrad,” he called it.

Maybe, but he doesn’t know history. The battle for Stalingrad was indeed a last stand, but it also proved to be the turning point. From the smashed ruins of that city, a force was turned back and another unleashed, one that went all the way to Berlin.

So, by all means, let battle commence.