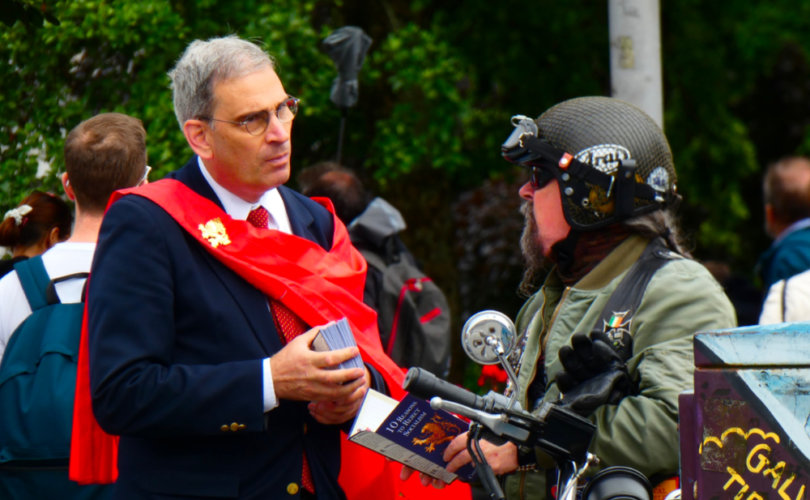 An ISFCC volunteer handing out leaflets against socialism in Ireland, July 2022.ISFCC

(ISFCC) — On a Monday afternoon in the peaceful town of Athlone, Ireland, a shout rang out “Ireland Should be Catholic, Not Socialist!”

The young men with Irish Society for Christian Civilisation were back in town defending the perennial values of tradition, family, and property. The specific issue for the public’s attention was the worrying advance of socialism in Ireland.

A plague is threatening Ireland

Over the last few decades, a plague has been spreading through Ireland. Most people don’t know its name, but they see and feel its effects. It spreads high taxes, rising petrol and grocery prices, eroding property rights, and worst of all, corruption of children in schools.

This plague has a name: socialism. This repackaged version of communism is a worldview of radical equality that seeks to level all natural inequalities.

Socialism promotes a materialist and atheistic perspective that despises and persecutes the traditional family and the Catholic Faith.

In Ireland, socialism is destroying both family and property rights. In recent weeks, socialist politicians have advanced the Right to Housing Bill 2020. If passed, the bill would recognize the “right to secure, affordable, dignified housing” and it will “delimit the right to private property where it is necessary to ensure the common good.”

Thus, this redefined right to housing would trump any right to ownership of private property and could even lead to the loss of property.

An even more concerning socialist advance against families is in the education field.

To alert the public to the danger of socialism, the Irish Society for Christian Civilisation (ISFCC) launched a week-long series of campaigns across the country.

Volunteers handed out over 10,000 leaflets titled “10 Reasons to Reject Socialism.” The leaflet unmasks the socialist ideology, showing how it attacks the Catholic faith, the family, and private property.

Throughout the week of campaigns, many people expressed surprise when hearing about the proposed Right to Housing Bill, the new educational strategy and other radical parts of the socialist agenda.

What the public had to say about socialism

Support for the campaign against socialism was widespread. In Galway, a young father pushing a pram received a leaflet and emphatically stated, “I hate socialism!”

In Cork City, there was a lot of support. One man, who already knew Irish Society for Christian Civilisation, asked, “are you getting much opposition?” “No, a lot of people are accepting the leaflets,” a volunteer answered. “That’s good. Keep up the good work.”

In Galway, another man approached an ISFCC volunteer and thanked him. “You’re the only ones doing this, and it’s such an important issue to talk about. People don’t realise there’s an underlying ideology pushing this, abortion, and all the other evils.”

There were, however, some people who were vehemently opposed to the campaign against socialism.

In Cork City, one man dressed as a hippie accepted a leaflet, but when he realised it was anti-socialist, he spat on it and threw it on the ground.

One pro-socialist woman came by during a campaign in Limerick. “I embraced socialism,” she told a volunteer, who in turn asked her, “so you agree socialism is the same as communism?” “Yes,” the woman said. “So do you agree with China and Russia?” the volunteer continued. The woman refused to answer and walked away.

The true solution: Turning back to God

The solution to Ireland’s problems is not to implement more socialist legislation, but for the nation to turn back to God. Ireland needs to embrace Christian Civilisation, as Prof. Plinio Correa de Oliveira explained in this way:

“Therefore, man advances in the life of grace by the practice of virtue, at the same time he elaborates a culture — a political, social and economic order — in entire consonance with the basic and perennial principles of Natural Law. This is what we call Christian civilization.”

This ideal will only become a reality in Ireland when God, His Church, and His laws are at the center of society.

Let us pray and act for the conversion of Ireland so that it may once again become the land of saints and scholars.

Reprinted with permission from the Irish Society for Christian Civilisation