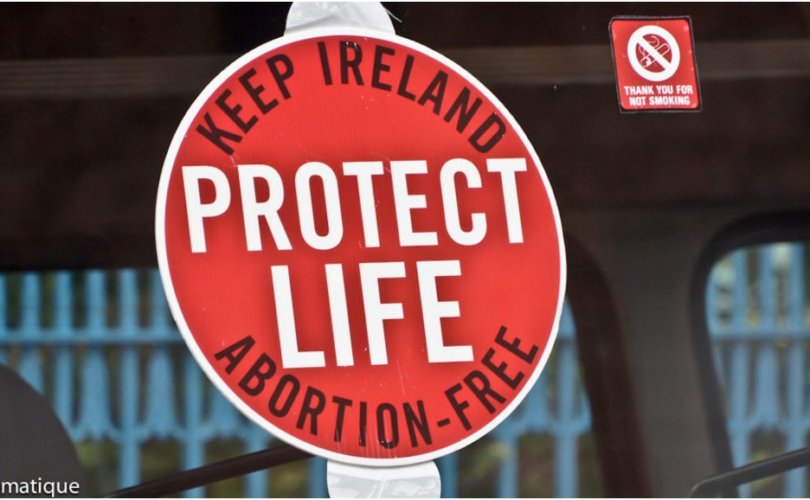 January 8, 2019 (LifeSiteNews) – On a Monday morning when the rest of Ireland was returning to work and school after the Christmas break, a group of  “concerned citizens” stood outside Our Lady of Lourdes Hospital, Drogheda, County Louth. They were there to witness to a life about to be taken.

They held placards saying: “Abortion is murder”; “Let him be born”; “Let her be born”; “Killing in progress”.

The Irish Times reported one of the group, Charles Byrne, as saying: “It is a quiet protest. We are not going to leaflet people: we had the leaflets in the referendum; this is merely to show support for that child who is losing his or her life today.”

Byrne went on to say: “I am here because I deeply and profoundly care about the right to life of every human being. I believe that every single human being is precious… Each individual is a unique person. We are here because we believe hospitals need to be places of care through compassion.”

Our Lady of Lourdes Hospital has a large and busy maternity unit serving a wide geographic area. The Irish Times also reported that another member of the group, Anne Trainer, told of how she had had all four of her children at the hospital. She spoke of the high level of medical care available to mothers there. She expressed concern about what medical staff are being ordered to perform now. Mrs Trainer also talked of her third child who has Downs Syndrome, and of how that child would have been targeted for destruction under the new abortion regime that is now being established in Ireland.

On Sunday night, a social media post from “Pro-Life Ireland” alerted the country to the fact that: “The first abortion in our Lady of Lourdes Hospital is scheduled for first thing tomorrow morning, Monday 7th. The priests in Drogheda have asked for prayers that the woman will have a change of heart overnight and not go through with the procedure. Please spread the word.”

The pro-life witness and the prayers called for found little support from the Catholic Archbishop of Dublin, Diarmuid Martin. Speaking to the Irish State broadcaster on Sunday night, he told those involved in any vigil to be “particularly cautious”, while making clear that he was “not a person for protest.”

“I would be particularly cautious about protesting against GPs because everybody is going there, and people go there for all sorts of reasons,” he said.

“I’m not a person personally for protest, what the Church should be doing is strengthening its resolve to help women in crisis and to educate people,” he added.

As reported earlier by Lifesite, these peaceful and dignified pro-life protests are beginning to spring up across Ireland. They are causing concern to the current pro-abortion Minister for Health, Simon Harris. The Irish Times reported that the minister found it “extraordinarily unedifying” for people to be identifying hospitals where abortions were purportedly being carried out. He described the pro-life posts on social media, such as those about abortions at Our Lady of Lourdes as “despicable”. The Minister said if information regarding a patient had been leaked from the health service it would be very serious.  One thing is certain: his concern for patients and human dignity and attendant hand ringing do not stretch to the child in the womb of that “patient”.

What Harris’ and others’ rhetoric is really about is closing down any debate on the subject of abortion. No one on social media or elsewhere mentioned any patient by name. It would be incredible – and wrong – if it had been.  The pro-life campaigners were simply present at the hospital gates to alert people to what is taking place in their midst at a local and well-regarded maternity hospital. The demonstration that ensued was, as it had been earlier in Galway, dignified and peaceful, solemn even.

In reaction, though, Minister Harris has once again threatened legislation to introduce censorship zones around abortion facilities. The Irish Times went on to quote him as saying: “I am absolutely committed to safe access zones and I have a Government decision supporting the introduction of them.”

In the short term, with such looming political issues such as Brexit, it may be that the Irish government and parliament decide to spend time protecting the Irish economy rather than pandering slavishly to the abortion lobby and its never-ending demands to silence witness to the reality of abortion which has now come to Ireland.

The Irish Times confronted Charles Bryne outside the hospital with the reality of the referendum result, reminding him that a majority had voted in favour of removing the constitutional ban on abortion.  The response they received to this from him was unexpected. Byrne told the reporter: “Justice does not come by majority. If hundred per cent of people voted for anything, that does not make it right or wrong. Democracy is a very useful tool but it cannot dictate right and wrong. Is ending a human life right or wrong? That is my question to people.”

With answers like this, I predict that the Irish media will soon start to ignore the pro-life protests that are currently gaining momentum across Ireland.  We will see censorship of the subject of abortion extended from the streets, to the airwaves, and the newspapers, because what the pro-abortion lobby in Ireland cannot afford is another debate on abortion, especially when abortion’s hideous truth is becoming all too apparent.