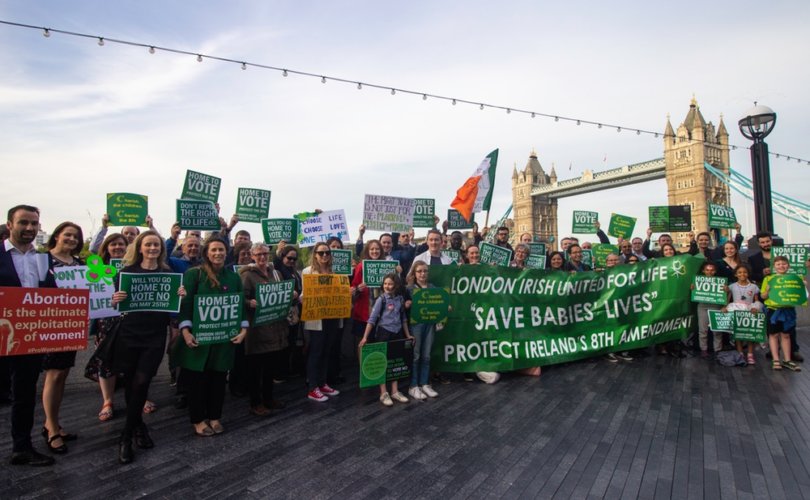 May 21, 2018 (LifeSiteNews) – Media coverage of Ireland’s forthcoming abortion referendum would seem to suggest, among other things, that the widespread Irish diaspora is wholly behind the repeal of the Eight Amendment to the Irish Constitution, the provision that safeguards the rights of the unborn.

As with much of the reporting on the referendum campaign from the media in Ireland and abroad, this is not the case.

Here in London, there is an active and well-organized group of Irish expatriates who are campaigning hard among the British Irish community for a “No” vote.

On Friday, 18 May, London Irish United for Life took part in what was described as a “Rallying Cry for a No vote in the Irish Abortion referendum.”

Two Irish women living in London established London Irish United for Life in 2017. Today it has over 300 active members. That May night, many of them had gathered on London’s Southbank beside Tower Bridge to demonstrate that the Irish in London are not exclusively a “pro-abortion” voting mass. Many of them believe Ireland should keep the constitutional safeguards for the unborn in its Constitution.

In the last days before voting takes place, London Irish United for Life is actively organising a “Home to Vote No” campaign. It is doing so by placing advertisements in Irish papers here in the U.K. and by members giving out leaflets at Irish sporting occasions in London. Others have been putting up “Home to Vote No” posters in Irish pubs throughout Britain; there has also been outreach with the large Irish student population studying here in British universities. The group hopes many people will heed its call and travel home to vote “No” to abortion.

At the rally on London’s Southbank, London Irish United for Life spokeswoman Laoise Ní Dhubhrosa summed up the feelings of many taking part: “We came together tonight to show the wealth of support that exists in the Irish expat community in London for saving the 8th Amendment. If the 8th is repealed, Ireland will follow the U.K. down the path of permissive abortion laws and practices.”

She concluded: “We don’t want Ireland to lose its culture of life and family. All lives should be cherished and protected.”

As recent polls released last weekend indicate, the referendum result is too close to call. A poll taken by Sky News at the weekend showed 47 percent support repeal while 37 percent oppose it, but with, crucially, a further 11 percent undecided, and then another 6 percent preferring not to say.

So the polls do show that the “Yes” campaign is leading, but that is not news. All recent polls on voting intentions for the forthcoming referendum have shown that. Perhaps, what is of greater significance is that the “Yes” lead has been consistently shrinking during the campaign. This is the reason now for the push coming from the opposing camps in the campaign for Irish voters residing abroad to return home to vote.

In an unexpected move, British universities are offering Irish students bursaries in order to go back to Ireland and vote in the referendum. Cambridge, Oxford, Nottingham, and London universities are all making funds available so that students can travel to Ireland and participate in the vote. So far students do not have to declare their voting intentions. The expectation is, however, that many students heading to Ireland to vote will be “Yes” voters.

Alongside this development there have been Irish press reports of an “unprecedented” surge in voter registrations ahead of the referendum.

Some estimate that as many as an extra 125,000 people are likely to be added to the electoral register ahead of the crucial vote on 25 May.

The National Youth Council of Ireland (NYCI), which represents organisations working with over 380,000 young people, claimed there had been an “unprecedented surge of voter registration.” It went on to add that if the returns received by NYCI to date are replicated across all cities and county councils, this would indicate that up to 125,000 people have been added to the supplementary electoral register between February and May 2018.

James Doorley, NYCI deputy director, said many of the registrations had come from younger voters.  He said: “It is really heartening that so many young people responded to the call by NYCI and others and took the opportunity to register.”

Again, the expectation is, however, that many of these newer younger voters will be casting their votes for abortion legalisation.

Whatever the polls say currently and however many do return home to Ireland to vote, one thing is clear: the 2018 Irish Abortion Referendum is going to be a closer result than many of those who called for the referendum in the first place – before subsequently advocating repeal – anticipated.