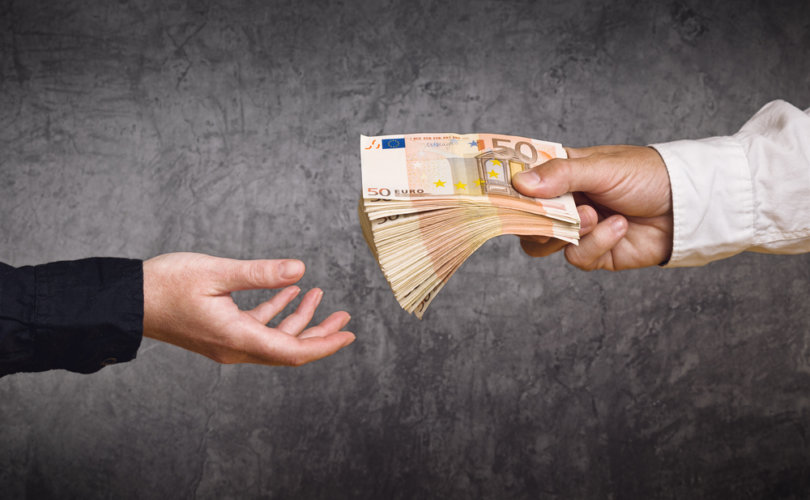 September 28, 2016 (The Life Institute) — Like the vast majority of Irish women, I’m not a member of the National Women’s Council.

In fact, almost no-one is, in the same way that only a minority of people support the NWCI’s position on abortion. They want to legalise abortion-on-demand, paid for by the taxpayer. The baby’s rights are never mentioned, there’s no compassion for the life that is ended.

It’s a pretty extreme stand to take, and the NWCI don’t speak for me, or for most women I know. But they still get wads of our cash to push for the legalisation of abortion.

So, even though I profoundly disagree with their wholehearted support for abortion, I am still being forced to fund it through my taxes.

And so are you.

We’re not talking about small change here. In 2015, the taxpayer handed over almost €550,000 to the NWCI, with most of that being spent on wages.

(This was an increase from almost €450,000 of taxpayer funding in 2014: in that year US billionaire Chuck Feeney was still funding NWCI, having given a total sum of more than a million dollars to the organisation.  I guess when the American money runs out, us taxpayers are now expected to stump up the difference for abortion campaigners.)

With all this largesse, you’d think the NWCI would prioritise the things that actually matter most to women: jobs, education, the crisis in the health services, the fact that we often don’t feel safe walking in our neighbourhoods at night.

But no. According to NWCI spokeswoman Orla O’Connor abortion was at the ‘top of their agenda’.

Clearly their agenda means marching to the tune of a minority, since an RTÉ exit poll after the last election found that abortion was bottom on the list of priorities for voters.

Just 2% of voters saw it as a priority. But facts can’t be allowed to get in the way of a good ‘repeal the 8th’ yarn.

Because the facts would suggest that either the NWCI is unrepresentative of most women, or they only ‘consult’ with women whose opinions on abortion correspond with their own.

It doesn’t even acknowledge women who regret their abortions, and its former Director, Susan McKay, strongly opposed a gentle and thought-provoking campaign from Women Hurt because it didn’t fit the ‘all abortions are good abortions’ narrative.

Curiously, the NWCI’s 2015 report sets out its agenda for the next 4 years without mentioning mothers once. It’s a bizarre world view isn’t it when motherhood is a dirty word, but abortion is a top priority?

So the NWCI is setting its own agenda, and representing the views of abortion extremists rather than the majority of women. Fair enough, if that’s what they want to do, but why should I be forced to fund this sham campaign?

The NWCI claims to be a ‘unified voice for members’ on these issues. But the reality is a bit different.

The Irish Countrywomen’s Association is the largest organisation in the NWCI – but it doesn’t have a policy on abortion. Likewise, when the Irish Cancer Society was asked if it supported the NWCI’s previous abortion push, the Society told supporters that: “The Irish Cancer Society has no involvement in any campaigning around abortion. The Women’s Council is aware of this. …….The Council campaigns on a wide range of issues, not all of which are agreed or endorsed by all member organisations.”

So it seems the NWCI’s ‘top of the agenda’ abortion push isn’t actually endorsed by all the members of the organisations it claims to represent.

The media never confront the NWCI with this reality. Instead, they are allowed to pretend they represent all the women of Ireland in making abortion a ‘top’ priority.

It’s time for this deceit to stop. The NWCI can fund its own abortion campaign, but it shouldn’t be entitled to use my taxes, and the taxes of the pro-life majority, to do so.

We don’t want our money used to push abortion because we know that abortion kills a baby and hurts a woman. We demand that this funding ceases, and that abortion campaigners fund their own campaigns.

Call Enda Kenny today on 01 619 4000 and tell him that the NWCI should not be funded by the taxpayer as long as they abuse that funding to push abortion.

Stand up to this misuse of your taxes, and let the NWCI fund their own extremist abortion campaign.