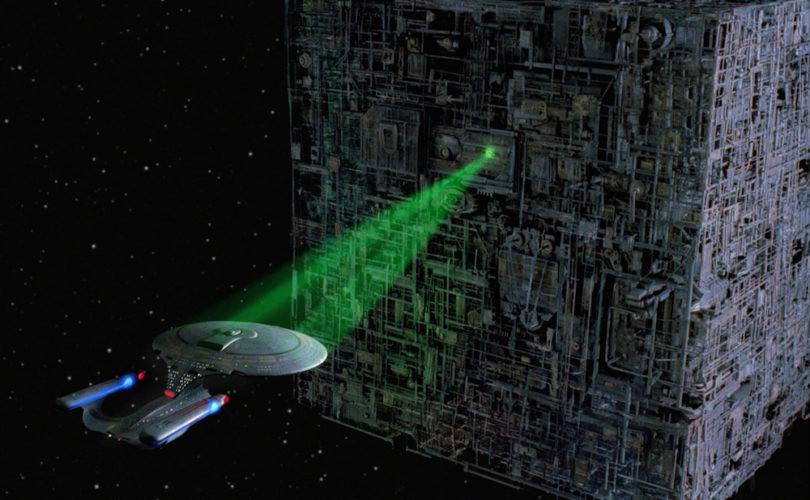 Canadians appear to no longer wish to uphold independent thought, opinion, speech or action.  Trekkies will understand my reference when I note that Canadian society is not the Borg Collective. It is not required that we be assimilated and resistance is not futile unless the Heckler’s veto rules and democracy is dead.

Three physicians in Ottawa are being hauled over the “public coals” because they have religious reasons, as well as ethical and moral concerns, against prescribing oral contraceptives, including a Class 1 carcinogen, to their female patients. It appears not to matter that they have followed all guidelines laid down by the College of Physicians and Surgeons of Ontario (CPSO) to inform patients.

To be honest, I was also appalled to see a poll on the CPSO website asking the question, “Do you think a physician should be allowed to refuse to provide a patient with a treatment or procedure because it conflicts with the physician’s religious or moral beliefs?” Is no one at the College conversant with our Constitution? How on earth can the College defend such a poll? Our constitutional rights are there to withstand such an assault – the public’s feelings must never trump our constitutional and Charter rights or we are lost as a democratic country.

Supreme Court decisions confirm there is no right to have our individual moral choices approved. However there are rights to freedom of expression, religion, and conscience, which, when upheld, provide the oxygen that keeps democracy alive.

In the 2002 Supreme Court of Canada decision in Chamberlain, Chief Justice McLaughlin and Justice Gonthier refuted the notion there was an alleged right to state censorship of citizens who morally disapproved of an individual’s conduct.

Justice Gonthier said, in his dissent:

… it is a feeble notion of pluralism that transforms ‘tolerance’ into ‘mandated approval or acceptance’.   In my view, the inherent dignity of the individual not only survives such moral disapproval, but to insist on the alternative risks treating another person in a manner inconsistent with their human dignity: there is a potential for a collision of dignities. Surely a person’s s. 2(a) or s. 2(b) Charter right to hold beliefs which disapprove of the conduct of others cannot be obliterated by another person’s s. 15 rights, just as a person’s s. 15 rights cannot be trumped by s. 2(a) or 2(b) rights. [para. 132]

Speaking for the majority in Chamberlain, Justice McLachlin said:

As my colleague [Gonthier, J.] points out, the demand for tolerance cannot be interpreted as the demand to approve of another person’s beliefs or practices.  When we ask people to be tolerant of others, we do not ask them to abandon their personal convictions.  We merely ask them to respect the rights, values and ways of being of those who may not share those convictions.  The belief that others are entitled to equal respect depends, not on the belief that their values are right, but on the belief they have a claim to equal respect regardless of whether or not they are right. [65]

To what extent then shall actions by a hostile audience be allowed to interfere with the exercise of constitutional rights? This question was posed in the USA with regard to the Heckler’s veto, a controversial position taken when an individual’s constitutional freedoms are curtailed because of another’s reaction. The Heckler’s veto is well known in Canadian jurisprudence.

In simple terms, I say or do something you do not like, you react strongly and cause a stir and the state limits my rights because of your reaction. In the situation of Drs. Kyrillos, Tanguay, and Leiva, a woman requested a prescription she could easily have filled elsewhere. The physicians hold moral and ethical standards preventing them from submitting to her request.  The public and media react and these doctors are castigated publicly and their rights, and thus ours, are in jeopardy.

Contrary to the feelings of some, we have rights and freedoms protecting our moral, ethical, and religious values. We are not required to leave them at home.  Democracy does not expect it of you and Canadian society is not the Borg Collective!

Justice Sloviter in the Startzell v. Philadelphia case reminds us:

If there is a bedrock principle … it is that the government may not prohibit the expression of an idea simply because society finds the idea offensive or disagreeable. In public debate our own citizens must tolerate insulting and even outrageous speech in order to provide adequate breathing space to the Freedoms protected.

The police are supposed to preserve order, which unpopular speech may endanger. Does it follow that the police may silence the rabble-rousing speaker? Not at all. The Police must permit the speech and control the crowd. There is no heckler’s veto. Just as bellicose bystanders cannot authorize government to silence a speaker so ignorant bystanders cannot make censorship legitimate.

The situation in Ottawa is the current example of the Heckler’s Veto but by no means the first nor probably the last. Pro-life clubs and pro-life Liberals have each come under the heckler’s bullying thumb. It has to stop before we cut off the oxygen sustaining Canada as a democracy.

Jakki Jeffs is executive director of Alliance for Life Ontario.

Conscience rights for Ontario doctors may be on chopping block again