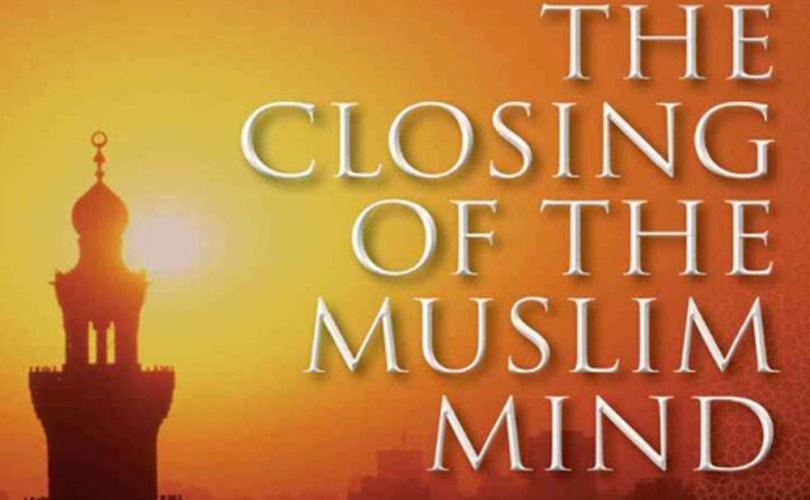 August 10, 2016 (CatholicCulture.org) – This week began with the striking statement from Pope Francis that Islam should not be regarded as the source of terrorist violence. The Pope's statement, suggesting that Islam is no more or less prone to violence than other faiths (including our own), is one in a long line of simliar claims, made by both Christian and Muslim proponents of inter-faith dialogue. Dialogue, taken by itself, is almost always worthwhile. (As Churchill, said, “jaw, jaw is better than war, war.”) But realists should have some appreciation for what dialogue can and cannot accomplish. More than two years have passed since I wrote this short piece, calling attention to my friend Robert Reilly's perceptive booklet, The Prospects and Perils of Catholic-Muslim Dialogue. But I'm not sure the understanding of the process has advanced; Reilly's cautions remain equally relevant today.

Robert Reilly, who gave us The Closing of the Muslim Mind, which I described as ”the most enlightening book of 2010,” has done another great service by applying the lessons of that important work to the field of inter-religious affairs. The Prospects and Perils of Catholic-Muslim Dialogue is a short publication at 37 pages: a pamphlet rather than a book. But again Reilly has valuable information to convey.

Is it possible to conduct a meaningful conversation about faith with someone who not only holds different doctrinal views, but also rejects the very notion that faith can be a subject for rational discussion? That is the question that Reilly poses here.

Christians believe that Creation is sprinkled with clues guiding man toward the knowledge of God the Creator. Even without the aid of revelation, the human mind can reason its way toward the realization that there is a God. The Christian God is a God of reason: the Word, the Logos, of St. John’s Gospel.

Muslims, on the other hand, conceive Allah as a power beyond human comprehension, completely unanswerable to mankind, unconstrained by human reason. While Christians say that God cannot contradict Himself, Muslims recognize no such rule. Where Christians see the laws of nature as God’s plan for the universe, Muslims see only individual acts of Allah’s will. A stone thrown into the air will come down, according to Islamic thought, not because of the force of gravity, which can be discussed and dissected, but because of the will of Allah, which can only be acknowledged and obeyed.

”God is love,” writes St. John, who has already identified God as “the Word,” thus showing the intimate connection between love and reason. Neither of these attributes of the Godhead is acknowledged by Islam, a faith that defines Allah exclusively by his will.

There was a time, early in the history of Islamic thought, when Muslim scholars believed that the Qu’ran could be discussed, analyzed, and thereby more intelligently understood. In The Closing of the Muslim Mind, Reilly explains how these Muslim scholars, the Mu’tazilites, lost a decisive battle to their rivals, the Ash’arites, in the 9th century. Following their own principles, the Ash’arites decreed that any attempt to analyze the mind of Allah is impious; they used their own power to stifle further discussion, to underline the idea that the Islamic faith is an act of utter submission to the will of Allah. As Reilly puts it, “the the Ash’arites said that revelation in the Qu’ran does not reveal what is good and evil; it constitutes what is good and evil. “ One influential Islamic thinker summarized the faith’s disinterest in the power of reason by speaking of “the mind which, once it testifies to the truthfulness of the Prophet, must cease to act.”

In his Regensburg lecture, Pope Benedict XVI spoke of the difficulty of reasoned dialogue with interlocutors who scorn the use of reason. More pointedly, he objected to the notion that faith might be spread by force. It is telling that the Islamic world responded with angry demonstrations, denunciations, and threats—not by arguing that the Pope was mistaken, but in effect by demonstrating that his criticism was directly on target.

Still, in the aftermath of that controversial lecture, there were sincere efforts to re-start dialogue between Catholics and Muslims. Reilly’s pamphlet is devoted to a critique of those efforts. In the US, he reports, a series of formal encounters have failed to spark any discussion about how reason might be applied to questions of faith. The joint statements issuing from these sessions have seemed inoffensive, but Reilly shows that they have included words and phrases that can be recognized by Muslims as reaffirming the traditional Islamic belief that adherents of other faiths should be vanquished, not accepted. Indeed Reilly fears that some of the participants in these discussion sessions are more committed to jihad than to dialogue.

Since they cannot come to any agreement on questions of religious faith, the dialogue participants have pledged themselves to work together for the promotion of human rights. Here, too, the agreement is less useful than it first seems. Muslim thought provides no real basis for the recognition of human rights apart from the prescriptions of Islamic law. The American idea that men are endowed with rights by their Creator, and that these rights can be explained with reference to “the laws of Nature and of Nature’s God,” is utterly alien to Muslim thought. Muslims and Catholics can agree to work for justice, but Reilly points out that the Islamic conception of justice is a sort of “divine positivism” that provides very little guidance for that work.

How then can dialogue proceed? Reilly makes a convincing case that the Church should seek out the few Islamic leaders who are prepared to subject their faith to rational analysis: the Mu’tazilites and their 21st-century intellectual heirs. If we seek real progress toward mutual understanding, he argues, Catholics should be encouraging those Muslims who, by recognizing the importance of reason, would make productive dialogue possible.

This article was originally published in CatholicCulture.org and is re-published with permission.

Cardinal Burke: The Church ‘really should be afraid’ of Islam
NewsBytes – Islamic persecution of Christians
Newsbytes – The spread of Islamism