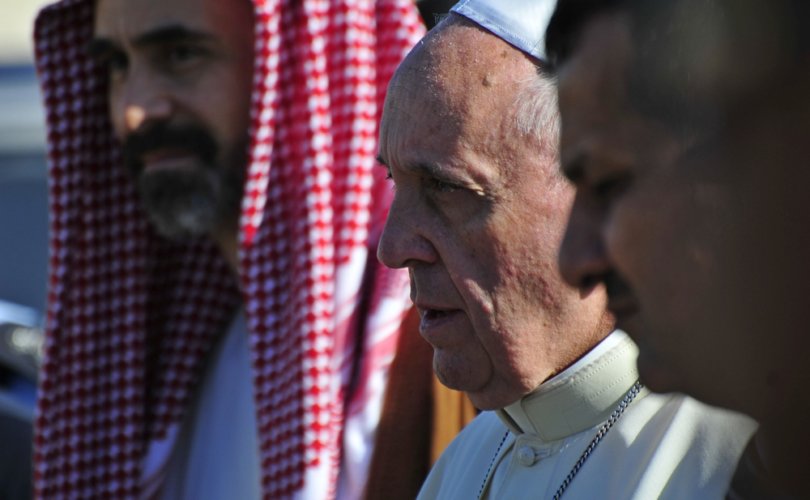 August 25, 2016 (Edward Feser) — Catholic writer Robert Spencer’s vigorous criticisms of Islam have recently earned him the ire of a cleric who has accused him of heterodoxy.  Nothing surprising about that, or at least it wouldn’t be surprising if a Muslim cleric were accusing Spencer of contradicting Muslim doctrine.  Turns out, though, that it is a Catholic priest accusing Spencer of contradicting Catholic doctrine.

Cue the Twilight Zone music.  Book that ticket to Bizarro world while you’re at it.

The priest in question is Msgr. Stuart Swetland, a theologian and president of Donnelly College.  The occasion was a radio exchange about Islam between Spencer and Swetland and a print follow-up, the details of which are recounted at Spencer’s website.  Swetland, it is important to note, is not a theological liberal and is known for his loyalty to the magisterium of the Church.  In the interests of full disclosure I might also add that I have met Msgr. Swetland and found him to be a decent and pleasant fellow.

All the same, his remarks are in my opinion deeply confused, unjust to Spencer, and even damaging to the Church.  And that is putting it charitably.

In a statement that reads a little like a disciplinary notice from the CDF (and which is reproduced by Spencer at the link above), Swetland cites a number of positive remarks about Islam to be found in Vatican II’s Nostra Aetate and in the statements of several recent popes.  These include remarks by Pope Francis to the effect that “authentic Islam and the proper reading of the Koran are opposed to every form of violence.”  Arguing that faithful Catholics ought to agree with such remarks, Swetland writes:

Robert Spencer’s positions seem to be at odds with the magisterial teachings on what authentic Islam is and what Catholic are called to do about it (accept immigrants, avoid hateful generalizations, show esteem and respect, etc.) At least in the area of morals, Robert seems to be a dissenter from the papal magisterium…

It is very important for all believers that the authentic teaching of the Church be clear so that we may know the truth and attempt to live it to the full.  I submit that there is a serious difference between the repeated magisterial teachings of the Church and the teaching of Robert Spencer in this area. (emphasis added)

End quote.  Now, Msgr. Swetland is certainly correct to urge a fair-minded and dispassionate evaluation of Islam.  I myself have argued (here and here), contra some hotheaded critics of Islam, that it is simply not plausible to deny that Muslims and Christians refer to the same deity when they use the word “God,” or to allege that Muslims worship some pagan tribal deity.  At the same time, it is naïve and dishonest to insist a priori that a fair-minded and dispassionate evaluation of Islam simply must result in the conclusion that on any “authentic” interpretation, Islam is peaceful and compatible with the modern Western political order.  Indeed, I have also argued (here and here) that there are serious reasons to doubt such a conclusion.

Msgr. Swetland is certainly also correct to emphasize, as he does in his statement, that the assent Catholics owe the teachings of the popes and the Church extends beyond merely those that are proposed infallibly.  He is right to reject the erroneous minimalist view that holds that as long as a teaching is not proposed infallibly, Catholics are free to dissent from it.  However, there is also an opposite extreme error of a maximalist sort, according to which Catholics are bound to assent to virtually anything a pope says that is even remotely connected with matters of faith and morals.  That is simply not the case.  As I noted in a recent post on papal fallibility and infallibility, there are five basic categories of magisterial statement, and it is only the first three which require assent from Catholics.  Hence it is no good merely to pull a remark out from some papal speech or even from a magisterial document of higher authority, and then declare peremptorily that all Catholics are obliged to assent to it.  One must carefully determine to which of the five categories of magisterial statement the remark belongs.  This is especially true where the remark seems to put forward some novel view, where there are contingent historical circumstances or empirical claims involved, and so forth.

It is bad enough when political pundits and other theological amateurs engage in the intellectually sloppy procedure in question.  But a professional theologian like Msgr. Swetland should know better.  And in my judgment, his comments on Spencer exhibit exactly this failing.  Other critics of Swetland have pointed out various specific problems with his argument.  For example, William Kilpatrick has pointed out that Pope Benedict XVI himself acknowledged that Nostra Aetate’s remarks on non-Catholic religions are problematic.  Fr. John Zuhlsdorf notes that Nostra Aetate was in any case intended to have merely pastoral rather than doctrinal import.

This should be obvious from Vatican II’s Lumen Gentium, which Swetland himself cites in his own defense but a crucial detail of which he ignores.  The document says that Catholics are obliged to assent, specifically, to teaching concerning “matters of faith and morals” (emphasis added).  The Code of Canon Law, which Swetland also quotes, makes exactly the same qualification.

Questions about the nature of Islam and the content of its doctrines simply do not fall into either one of these categories.  Islam is not only a religion distinct from Catholicism, but arose six centuries after what Catholicism regards as the close of public revelation at the time of the apostles.  In no way, then, from the point of view of Catholicism, can Islam represent a genuine revelation from God.  Hence determining what counts as “authentic Islam” is in no way a part of the Church’s task of handing on or interpreting the deposit of faith.  How Islam arose, what it teaches, its political and cultural implications, etc. are empirical questions on a par with questions such as what the causes of World War II were, whether Lao Tzu really existed, what the chemical composition of salt is, what the basic tenets of Georgist economic theory are, and so forth.  Since they lie outside the domain of Catholic faith and morals, the Church has no special expertise on such matters and thus cannot pronounce authoritatively on them.

What a pope or ecclesiastical document has to say about Islam thus seems obviously to fall into what, in the post linked to above, I labeled category 5 statements, i.e. statements of a prudential sort on matters about which there may be a legitimate diversity of opinion among Catholics.  A Catholic ought seriously and respectfully to consider statements of this category which concern Islam, but is under no obligation to assent to them.  Hence, questions such as whether Islam is inherently more prone to generate terrorism than other religions are, whether Islam is compatible with liberal democracy, how many Muslim immigrants ought to be allowed into a country and under what circumstances, etc. are in the nature of the case questions about which good Catholics can legitimately disagree.  Even the question of whether Christians and Muslims refer to the same thing when they use the word “God” — and I certainly believe that they do — cannot be a matter of orthodoxy.  There is nothing contrary to binding Catholic doctrine in claiming that Muslims worship some pagan tribal deity, even if (I would argue) this claim is false, ungrounded, and too often driven by emotion rather than clear thinking.

(A critic might say: “But hasn’t the Church pronounced on all sorts of non-Catholic doctrines, such as socialism and communism, various heresies, etc.?  So why can’t she pronounce on what counts as authentic Islam?”  But such an objection rests on confusion.  When (for example) Pope Leo XIII condemned what socialists say about private property, he wasn’t saying “Every Catholic is obligated to believe that one of the tenets of socialism is the rejection the institution of private property.”  Rather, he was saying “Every Catholic must accept the institution of private property.”  His point was not authoritatively to define what counts as authentic socialism but rather authoritatively to condemn certain errors which happen to have been widely associated with socialism and which are at odds with Catholic teaching.  If it somehow turned out that socialists don’t really reject private property after all, that wouldn’t affect Leo’s teaching, because the point of his teaching was to tell Catholics that they ought to uphold private property, not to give a lesson in political science about the history and tenets of socialism.)

So, while it is perfectly legitimate for Msgr. Swetland to disagree with Spencer’s analysis of Islam, it seems to me manifestly unjust, and indeed outrageous, for him to label Spencer a “dissenter” — as if Spencer ought to be lumped in with the likes of Hans Küng and Catholics for Choice!

But it is worse than that.  When a prominent orthodox Catholic theologian and churchman like Msgr. Swetland confidently (but falsely) asserts that taking a positive view of Islam and rejecting opinions like Spencer’s are nothing less than matters of binding Catholic doctrine, he threatens to give grave scandal.  For some Catholics who sincerely think that Spencer’s views are well-supported might mistakenly conclude that the Church requires the faithful to accept falsehoods, and may for that reason even consider leaving the Church.  And some non-Catholics otherwise attracted to Catholicism might refrain from entering the Church, on the mistaken supposition that doing so would require them to assent to something they sincerely believe to be false.  (Judging from the YouTube combox discussion the radio debate between Spencer and Swetland has generated, some people are drawing exactly these sorts of conclusions.)

I have no doubt that Msgr. Swetland is sincere and only means well.  But in my opinion he owes Spencer a retraction and apology.

Reprinted with permission from Edward Feser.