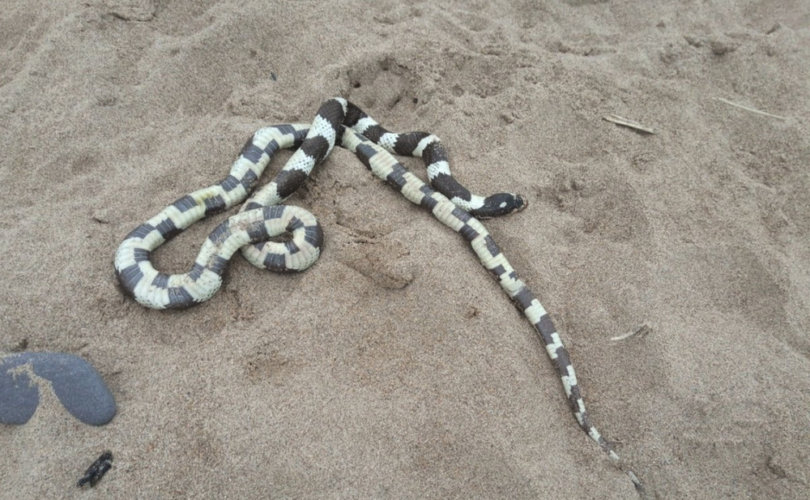 The newspaper reports were lighthearted.

It was strange but nothing more, surely?

On January 4, washed up on the shore of County Cork, Ireland, was a large serpent, measuring 1.5 meters (approximately 5 feet).

Ireland is free of snakes. It has been since the time of St. Patrick, who, it is said, cast them from the island. They have for centuries represented the vile paganism that ruled the land before Patrick came and established Christianity.

The fact that a snake made its way ashore onto Irish soil once more is not, therefore, to be seen as just another zoological phenomenon. It may be read as also a symbolic one, coming at a time when Ireland is turning away from the light and naively embracing an ancient darkness.

Just three days before the appearance of the serpent, the new Irish law on abortion came into effect. The president of Ireland had just a few weeks earlier rescinded the country’s constitutional safeguard for the unborn and signed into law the death warrant of many future Irish now denied the right to be born. On that day, his pen was more akin to the scalpel, the same implement that shall now be wielded against defenseless human beings who have committed no wrong, who asked for nothing other than life and love, but found only death.

January 1 was the day chosen to inaugurate this new gruesome dispensation. Traditionally, this is the feast day dedicated to the Mother of God. It is, now, in Ireland a “feast day” of a different kind for another type of “celebration.” What is being venerated is unseen but, nevertheless, all too present in modern Irish society.

A day or so after the feast of the Epiphany, when Christians commemorate how the kings came from across the world to worship the infant King of Kings, the first abortion took place in Ireland. It is alleged that this occurred in a hospital that goes under the name Our Lady of Lourdes. This is a title of Our Lady’s specifically linked to her maternal care and concern for the sick. Now, instead, this title has been made into an infernal sneer, a wicked boast.

Was all of this mere coincidence? I’ll leave you to judge that.

But with the darkness now descending upon Ireland’s Four Green Fields, a spiritual night is fast approaching. And, in its cold gloom, strange new gods are being worshipped once more, the bitter lessons of old, that the pagan gods were never gods but demons, long since forgotten.

So too has been forgotten the truth that the Church has been a home to the Irish nation — at times its only home, despite those within the flock who turned out be wolves in sheep clothing. Through persecution and famine, through pain and suffering, exile and poverty, Holy Mother Church was the home where the Irish found refuge emotionally and spiritually, whether in the north country of Ulster, on the grey streets of New York, or the sparsely populated territories of Australia or Patagonia, She was a light to enlighten the darkness that had so often flooded the lives of the children of Erin at home and abroad. For many, the Church remained the hearth warming the center of the nation’s emotional home, and with a Mother always present there.

Today, publicly at least, Ireland has abandoned the faith.

Too many of the country’s politicians talk glibly of the nation’s onward march to a bright new future – one that, no doubt, shall be as economically prosperous as it will be spiritually bankrupt. Yet all the time, while these same politicians incant the word “progress” to justify a nation’s regress to former barbaric ways, the progression talked of is in reality the same as that described in the nine-circles-descent described by Dante.

These Irish who jubilate over new abortion legislation refuse to learn the lessons of old. They shall learn them soon enough, however, especially as they come to experience what spirits have been invoked upon the land of Patrick. By then it will be too late. Even if, at that point, they have learned again that, away from the faith, outside the true home of all mankind, there is only endless night.

A serpent was washed ashore at County Cork on January 4 to usher in 2019. That creature was soon dead. Other “serpents” are already ashore, however, and very much alive, and have all too easily found a home.