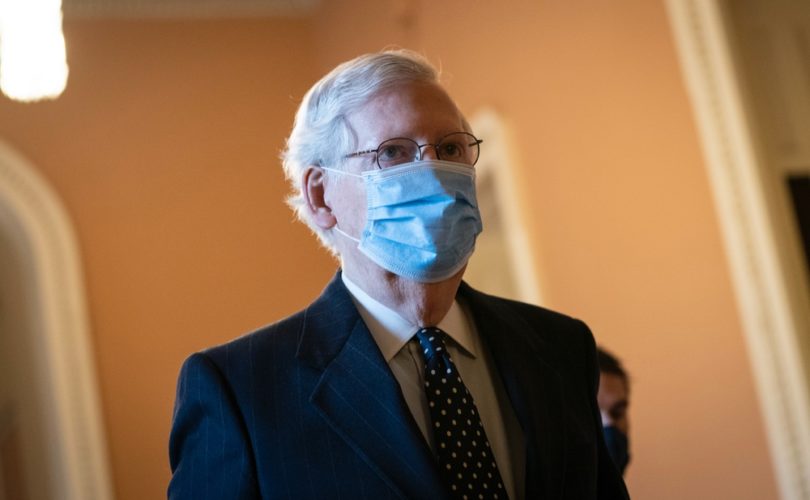 Note from LifeSiteNews president Steve Jalsevac: This article presents important comments on the exploitation of Jan. 6 for nefarious political purposes and especially Mitch McConnell’s cooperation with that scheming. As for Trump, there are valid concerns among social conservatives over his ramped-up courting of the Log Cabin Republicans and especially his insensitivity and outrageous praise of his Warp Speed COVID injections that have caused catastrophic harm. Therefore, the question of whether he deserves another four years is far less certain this time although he is promoting many other good policies. Florida Governor DeSantis is now seen by many as a preferable candidate.

(American Thinker) – I do try not to get angry when government actors confirm my belief that they are lowly human beings not worthy of respect. With age and experience, most people eventually come face to face with enough instances of injustice or straight-up barbarity in the world to understand that life is no bed of roses wherein the righteous triumph effortlessly over the wicked.

You see a few things that make it impossible to deny evil’s grip on human nature, and it is no longer practicable to be upset by every instance of government corruption or ineptitude. Living life in a constant state of anger only serves evil’s own machinations by handing it your soul.

Still, there are things that boil my blood faster than I am able to tend to my passions and mediate my hatred. And one of those instances came this week when Mitch McConnell pushed the D.C. Leviathan’s lie that January 6 was a “violent insurrection” in his clear attempt to set the stage for a time in the near future when the power-mad monsters of Washington declare to the country that President Donald Trump will not be “permitted” to run for election in 2024.

I could write an avalanche of essays explaining how important I believe Trump’s presidency has been for this country. But that seems secondary to the need to roll up six years of government-orchestrated hoaxes, crimes, and propaganda used to undermine the 2016 (and, in my opinion, 2020) election(s) and shove all of Washington’s corruption right down its collective throat.

Even if I did not like Donald Trump, the Uniparty’s and Deep State’s relentless efforts to prevent his 2016 election, sabotage his presidency, undermine 2020 ballot security, censor evidence of election fraud, criminalize his supporters as “domestic terrorists,” and now put Trump in legal jeopardy by framing him as having attempted to overthrow the federal government are more than enough to ensure that I would walk through fire to vote for him again.

I know we are living in communist cuckoo land now, where “The Science” is always right, Dementia Joe is always lucid, printing money creates prosperity, and men can break women’s records in sports, but at what point do the Deep State despots crafting one fanciful lie after the next finally step back and say, “Nah, nobody will ever believe this nonsense?”

The Russian collusion hoax is now understood by everyone but the most brainwashed (or those invested in the lies because they were doing the brainwashing) to have been an elaborate conspiracy involving Hillary Clinton’s political campaign, Barack Obama’s FBI and CIA, and a propagandistic press laundering their disinformation as the gospel truth.

Four years of Establishment Republicans (in the majority in the House until 2018 and in the Senate until 2020) giving Democrats carte blanche to legitimize conspiracy theories in Congress, with outrageous claims the Republican president was a Russian spy, only opened up the eyes of Republican voters to how insidiously the Uniparty in D.C. operates.

A bogus Mueller “witch hunt” (ostensibly led by a man struggling, like Joe Biden, from cognitive decline but really led by a pack of raving Democrat partisans seeking blood) helped shackle the Trump presidency with constant threats of criminal indictments hanging over the White House.

And a ludicrous impeachment of President Trump for having the audacity to bring to the public’s attention the Biden family’s egregious quid pro quo corruption involving the trading of political favors for wealth (and criminal impunity) around the world, including Ukraine, served to prove that too many Uniparty congresscritters were either likewise pigging out at Ukraine’s pecuniary trough or terrified that the Biden scandal would ensure a Trump re-election.

A helpless public watched in real-time as the ruling class used the ruse of a COVID-1984 pandemic to usher in anonymous and unsecured mass mail-in balloting in battleground states (often in explicit violation of state statutory law) just in time for the 2020 election.

When that same helpless public found it unfathomably difficult to believe that a sitting president could win over ten million new votes during re-election yet somehow still lose – (a feat never before seen in American history, save for President Grover Cleveland, who lost re-election in 1888 amid allegations of fraud against his opponent, Benjamin Harrison, and who subsequently returned to the White House four years later in a landslide) – or that a lifetime Washington relic who campaigned from his basement in Delaware could legitimately receive more votes than Obama, Trump, or any other past president with an energetic and loyal army of voters, those doubters were ridiculed as “sore losers” and “conspiracy theorists.”

When they refused to quietly withdraw into irrelevance and submit to 2020’s questionable outcome, however, the Leviathan moved quickly to designate them all “domestic terrorists” involved in “insurrection” and deserving of solitary incarceration and vindictive punishment.

It has been one of the most nakedly authoritarian attacks on a group of ordinary and relatively powerless Americans for their political beliefs in recent memory. The partisanship and rule by fiat emanating from the swamp is so repugnant to the nostrils of Americans living outside Washington that nobody not already part of its foul-smelling rot sees the January 6 Committee as anything other than a vehicle to prevent Trump’s return to power.

Is there really no point when some minimally moral human cog charged with enforcing the brute machinery of the bureaucratic State steps back from harassing and arresting political protesters for exercising their free speech, right to assemble, and right to petition their government for redress of grievances and says to himself, “Wow, we have really become quite tyrannical here in D.C., haven’t we?” Apparently not.

Now those same Americans who have been unjustly painted as “extremists” and “terrorists,” by the wide brushstrokes of a frantic and increasingly fascist federal government, are watching as Mitch McConnell and his Uniparty lackeys get ready to drop the coup de grâce of their years-long coup d’état against a man whose chief crime seems to have been his desire to “Make America Great Again” at the expense of the ruling class’s vampiric draining of natural rights and liberties from the American people and Washington’s vise-grip over illegitimate power, unearned wealth, and infernal corruption.

As much as I desire an end to Biden’s Marxist regime, its unconstitutional mandates, and its imperious bullying, watching McConnell and his power bloc genuflect in support of Democrat and Deep State lies, so they can return to power without deigning to respect Donald Trump or his political movement, is equally revolting.

I cannot see how a future Majority Leader McConnell rights the sinking ship of American governance. I also wonder if he and the Uniparty he represents have fully considered the consequences of denying American voters the chance to democratically elect Donald Trump again in 2024.

Should they so pierce the veil of our last remaining civic norms, there will be no going back. And who is to say that what comes after that won’t make a Trump presidency look downright docile by comparison?