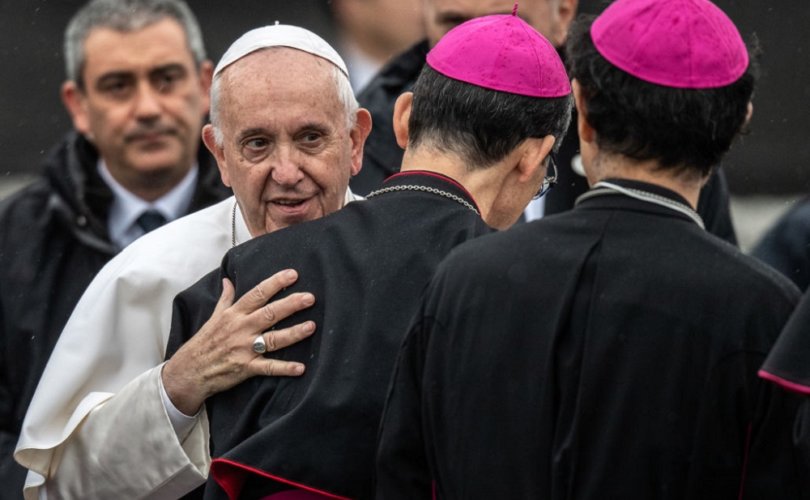 February 13, 2020 (The Catholic Thing) — Querida Amazonia, Pope Francis’ Post-Synodal Apostolic Exhortation (released yesterday), is, at a first reading, a mostly pleasant surprise. It shows little of the freewheeling radicalism that bulked large — in the synod hall and Vatican gardens, and even on the streets, during the Synod last October. He quotes copiously from his own texts, to be sure, but also from St. John Paul II and Pope Benedict XVI. So much so that Cardinal Gerhard Mueller, a powerful voice in current Church debates, has called the Exhortation an effort at reconciliation.

There’s no mention of married viri probati as a remedy for the Amazonian priest shortage — but nothing about priestly celibacy either. Instead, for now, the pope wants bishops in the region to emphasize priestly vocations and the responsibility of priests from the region to stay there instead of heading to North America and Europe. And he invites priests inclined to missionary work to go to Amazonia.

The question of deaconesses is actually turned in the opposite direction to where it seemed headed, again for now. Francis says that innovations along that line would be a “clericalization” — a strongly negative term for him — of the true contributions women have made and continue to make in accord with their true nature, which is noteworthy for “tender strength.”

There are hints here and there of liturgical adaptations, but not the full-blown “Amazonian Rite” much debated during the synod (a seeming impossibility given the hundreds of different tribes and language groups in Amazonia that would have to be accommodated).

And there’s a bit of what might be called temporary syncretism — a patient toleration of the blending of native and Catholic practices preliminary to a purification of indigenous ways, the kind of thing missionaries sometimes allow and not necessarily a problem, if you’re confident about the ultimate goal. And why it’s being done. And by whom.

The one large caveat in all this, which is presented in a way clearly intended to avoid adding fuel to already raging fires, is the ambiguity — a Bergoglian trademark — in how this relates to the Final Report of the Amazonia Synod, which was far more radical and controversial on these very points. The pope says at the outset that he won’t quote from the Report because he wants us to read the whole thing. And beyond reading: “May the pastors, consecrated men and women and lay faithful of the Amazon region strive to apply it, and may it inspire in some way every person of good will.”

So there’s an olive branch being offered, at least on the surface. Or maybe there’s been fear in Rome that pressing further at this moment might take the Church to the breaking point. One of the pope’s guiding principles is: “It is more important to start processes than to dominate spaces,” as he put it in Amoris Laetitia (§261). What is really happening here will only become clearer as the process of striving “to apply” the Report — not the Exhortation — takes shape. The bulk of this conceptual iceberg may lie below the waterline.

The Report spoke almost compulsively of the need to “listen” to indigenous peoples, so much so that you wondered why they needed missionaries or other outsiders at all. The Exhortation wants “listening” as well, but adds:

If we devote our lives to their service, to working for the justice and dignity that they deserve, we cannot conceal the fact that we do so because we see Christ in them and because we acknowledge the immense dignity that they have received from God, the Father who loves them with boundless love. They have a right to hear the Gospel. … Without that impassioned proclamation, every ecclesial structure would become just another NGO and we would not follow the command given us by Christ: “Go into all the world and preach the Gospel to the whole creation.”

The bulk of the Exhortation, however, is devoted to various social justice themes. Of its four chapters, only the last touches directly on central Church matters. Each chapter is animated by a “dream,” sometimes illustrated with passages from major Latin American poets like the Chilean Pablo Neruda and the Brazilian Vinicius de Moraes:

I dream of an Amazon region that fights for the rights of the poor, the original peoples and the least of our brothers and sisters, where their voices can be heard and their dignity advanced.

I dream of an Amazon region that can preserve its distinctive cultural riches, where the beauty of our humanity shines forth in so many varied ways.

I dream of an Amazon region that can jealously preserve its overwhelming natural beauty and the superabundant life teeming in its rivers and forests.

I dream of Christian communities capable of generous commitment, incarnate in the Amazon region, and giving the Church new faces with Amazonian features.

As with the pope’s encyclical on the environment, Laudato Si, these somewhat Romantic notions rightly remind the developed world that other kinds of lives have value. And that we need to recover a sense of the world as Creation, not merely matter and energy, to be manipulated for any end, irrespective of God’s order. The “transgender” movement is the final station stop for that train, wherein people may claim to be something, at mere will, that their bodies down to the molecular level deny.

We can all learn from each other, to be sure, but the primitivist model of community, harmony with nature, and buen vivir (“good living”) that Rome has latched on to has a long literary history, but only very general lessons for a world of 7 billion people. It would have been better to acknowledge that somewhere.

And it would be better if Rome made clear that the Amazon’s priest shortage also has limited lessons for a global Church. The processes now in motion need to be guided by something steady and different from we’ve seen so far. With the new Exhortation, we still can’t say whether that’s emerged or not. But doubtless we’ll soon see.