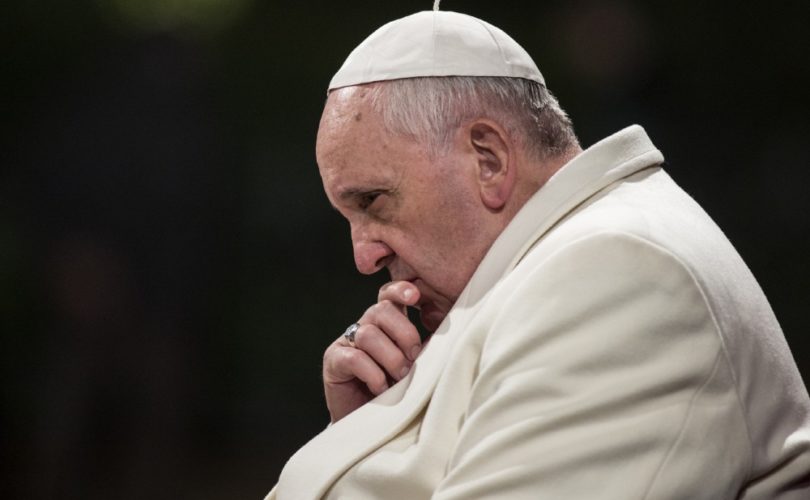 November 4, 2015 (Catholicculture.org) – Ross Douthat of the New York Times has argued forcefully that Pope Francis has created dangerous fissures within the Church by supporting the Kasper proposal. But now Douthat suggests that the Pope could head off a crisis by issuing a post-synod exhortation in which he would “just leave things where they are”—that is, say nothing explicit about Communion for the divorced/remarried.

Yes, and there’s another compelling reason why the Pope could and should avoid pushing ahead with the Kasper proposal.

We’re assuming, here, that Pope Francis wanted the proposal approved—or at the very least, wanted to explore every possible avenue toward its acceptance. Let’s assume, too, that the Holy Father believed such a change could be made without contradicting Catholic doctrine. (The former assumption is unavoidable, in light of the Pope’s statements and actions during the past two Synod meetings; the latter is obligatory for anyone who is not ready to denounce the Vicar of Christ as a heretic.)

However, although he favored the Kasper proposal (according to my assumptions) Pope Francis should also have recognized that he could not take such a dramatic step alone. The power of the Roman Pontiff is extraordinary but it is not unlimited. When he teaches with authority, the Pope must speak for, and in union with, the college of bishops. This year’s Synod meeting demonstrated that the world’s bishops are not united behind the Kasper proposal. By pushing the matter, then, the Pope would violate his duty to serve as the focus of unity within the episcopate.

In short, we may yet conclude that the Synod, rambunctious as it was, did its proper duty: the bishops advised the Pope against a course of action that might have compromised the integrity of the faith.

It’s true that, if I am right, we are left with what Douthat accurately describes as a “muddle.” Proponents of the Kasper proposal are already claiming victory; in many dioceses divorced and remarried Catholics will soon be receiving Communion (if they aren’t already), regardless of the Church’s official stand. The only way to avoid that outcome would be for Pope Francis to issue a very explicit reaffirmation of Church teaching on the topic.

But that sort of emphasis on doctrinal clarity would be completely out of character for Pope Francis, who has spent so many homilies denouncing the “doctors of the law.” Moreover, an emphatic rejection of the Kasper proposal would no doubt cause outrage among liberal Catholics, escalating the doctrinal warfare that is, as Douthat observes, only simmering today. Occasional doctrinal skirmishes can be a very serious matter for those who are directly involved (as Douthat himself knows all too well), but all-out warfare causes more casualties.

Kasper’s flawed path to mercy for divorced and remarried

There can never be opposition between ‘pastoral action and doctrine’: Cardinal Piacenza refutes Kasper