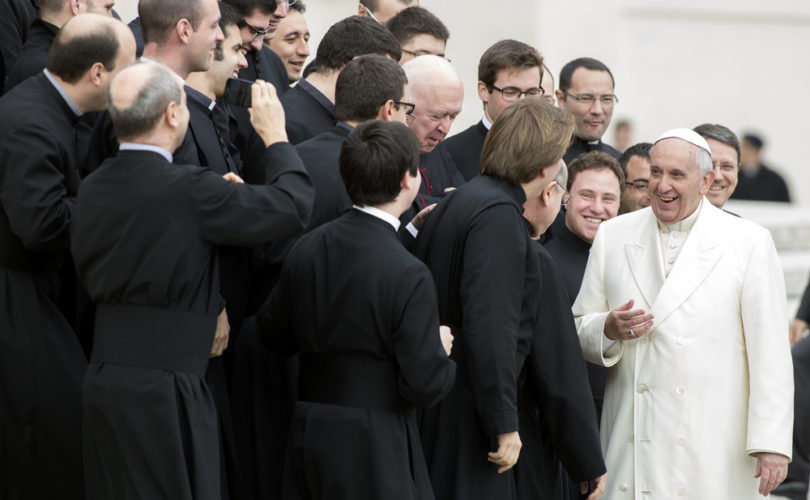 By a priest who cares about the Church

November 3, 2015 (CatholicVoice) — Is a homosexual agenda unduly influencing the outcome of the Synod on the family? It’s a question that needs to be raised because snippets gleaned from the Vatican in recent years seem to point in this direction. But before we explore this in more detail we need to underline the following points:

We should recognise that the presence of homosexual priests affects the church in different ways. Some are true celibates who, despite having an inclination towards same sex attraction, honour their ordination vows. Though its painful to admit, other homosexual priests are sexually active, and therefore flout church teaching, but they nevertheless uphold the moral standards of wider society. Within this group of sexually active homosexual priests will be those who are secretly partnered and monogamous as well as those who are more promiscuous. And finally there are deviants. Those who don't limit their sexual behavior to consenting adults but who hit on the young and vulnerable. The first group of celibate homosexual priests are no problem to the church, the next group are un-repentent sinners causing scandal but not a menace to society. The third group are clearly abusive and dangerous.

Impact of homosexual priests on the Church

Having made this distinction, between differing ways in which homosexual clergy deal with their sexuality, we may ask how the issue may impact on church decisions. But let us be clear. The purpose of this article is to shine a light on a possible agenda not to point fingers at any individual. Being favourable to a cause is not evidence that anybody is themselves part of it.

The Catholic Church has struggled to navigate the modern world in the wake of the sexual revolution and Vatican II. It is no secret that vocations, in particular, have been hit to the point of there being a dire shortage of priests in the West. And what tended to happen is that during the 1970's and 1980's the priesthood became an attractive option for gay men. And because the church was desperately short of vocations it was willing to turn a blind eye, so long as scandal was avoided. Thus a disproportionate number of gay men entered the church and settled into its ecclesial structures during the latter half of the 20th Century.

Most were young men raised in devout Catholic families at a time when homosexuality was taboo. By taking holy orders they not only ducked awkward questions from relatives and friends but also found a spiritual outlet for their confusion and, in some cases, guilt and self loathing. Seminary proved a happy home for such as these because they no longer battled alone but came into contact with like minded people. A deep fraternity built up between them and forged what would become an entire, secret subculture within the clerical ranks of the Catholic Church.

Some of these gay men were able to overcome their sexual urges and became truly celibate. But others found that they lacked the requisite self control. How could they remain within the church? The answer was to keep sexual activity amongst themselves to ensure that scandal was largely avoided. Coded language and certain looks were all it took for those interested in sexual activity to identify themselves to each other at clergy meetings and conventions. As regards the goal of protecting the church from public scandal the approach worked. The lay faithful remained ignorant as to the sexual lives of these men who were themselves content to remain closeted. Sure one or two occasionally left the priesthood to join the ‘gay scene’ but by and large things ticked over.

The Sex Abuse Crisis and the Homosexual Subculture

Problems arose only when the wicked amongst them did not keep to the unspoken rules. They began seducing the lay faithful and, in the worse instances, forced themselves onto young boys. We finally arrive at the crimes of the infamous sex abuse crisis. Independent studies show that the crimes of sex abuse were not so much paedophilic but homosexual in nature. Over 90% of the cases were instances of gay men hitting on post pubescent boys.

Naturally other gay priests, being decent men, were horrified at this behavior. But fear stemming from their own hidden lives prevented them from taking action. Priests who were themselves part of the gay subculture, or at least aware of it and accepting of it, found themselves open to blackmail and accusations of a certain degree of hypocrisy. The scandalous consequence was that priests, who should have been defrocked, were instead moved to another parish. What we now know in retrospect was that the gay network of priests looked after its own, even its most deplorable members, for fear of widespread exposure and scandal.

Clerical Careers and the Homosexual Subculture

Meanwhile the better behaved homosexual priests were growing older and gaining preferment. How hard it must have been for them to watch the world change its own attitude to homosexuality whilst they remained (and still remain) closeted. These men found themselves unable to join the party. This impossible tension between public face and private life came to light when the Cardinal Archbishop of Scotland caused scandal. Though he proved a strong defender of Church teaching in the public square it transpired he had also been hitting on seminarians when tipsy.

When you consider the impossibility of these men’s situation you begin to see why very close bonds formed between them. It is hardly surprising that nepotism may have crept in. The homosexual subculture became not only a social space but also a recruitment body. Not least for reasons of self preservation. And the higher these tortured souls rose in the church, the greater the fear of exposure must be. Thus it was that a ‘Gay Mafia’ sprang up and homosexual clerics found and created for themselves influential friends in high places.

The Vatican and the Gay Mafia

That is how one might image a homosexual subculture was formed. Now to the piecing together snippets of evidence from the Vatican.

In 2005 Pope Benedict asked the faithful to pray for him that he may not flee for “fear of the wolves”. He also spoke of a “powerful gay lobby” at work in the highest levels of the Vatican. Pope Francis has referred to it too, so we know it exists. Furthermore, Pope Benedict’s instinct, in the wake of the abuse crisis, was to insist that men of “deep seated homosexual tendency” should be barred from the priesthood. A suggestion that he understood the true nature of the sex abuse crimes was not, in fact, pedophilic but homosexual.

Pope Benedict’s conclusion, unsurprisingly, was unpopular with the secular press who still refuse to acknowledge the overwhelming evidence about the homosexual nature of the abuses And so Pope Benedict was pilloried for categorically upholding the Church’s doctrine on homosexuality. It is likely that Pope Benedict’s actions galvanized the powerful “Gay Mafia” to act against him. Clearly the secular world and its media, in the wake of the rainbow revolution, was in their pocket.

The St Gallen Group and the Gay Mafia

Now in 2015, Cardinal Danneels of Belgium, accused of covering up sexual abuse by priests, has publically announced his role in the covert “St. Gallen Group”, which he refers to as a “mafia group”! This is a cabal who plotted behind the scenes, not only to trick Benedict into abdication, but also to put Francis on the throne. Could they be the wolves to whom Benedict referred? And what is their relationship, if any, to this shadowy Gay Mafia? Whether implicated or not, and this writer has no evidence either way, the St Gallen group members are certainly clamouring for a volte face in the Church’s doctrine and pastoral care of homosexuals.

And there is also support for such a cause outside of the St. Gallen group. In the West there are Cardinals of a certain generation who support a softening of tone in this regard. Archbishop Vincent Nichols, for example, defended the controversial “Soho Gay Masses” at some cost to himself and is on public record demanding more generous language as regards homosexuality. Whether such men are part of any lobby or subculture themselves cannot be known. But what we do see is that they certainly support the cause in general.

The Gay Mafia and the Synod on the Family

Regarding the shadowy St. Gallen Mafia, questions are now being raised about Pope Francis’s relationship with this group, and its influence on the Synod. Cardinal Danneels has publicly admitted that Pope Francis was their favoured candidate at the 2005 and 2013 Conclaves. Is Pope Francis “their man”, as they themselves claim. This appears at least a feasible possibility given how many of the St Gallen cardinals were sprung out of retirement and have been given a voice by the Holy Father at the two Synods on the Family . This begs a further question: why are these Synods on the family saying little new or of value to actual families but obsessing about homosexuality? Could it be the influence of the Gay Lobby? This scenario needs to be considered by any watching the Synod with interest.

Are we in fact witnessing the demands of a clerical homosexual subculture being imposed on the Catholic Church at large? Is the demand for a softening of language and rules to placate those, who like the recently self-outed Fr. Charasma, have one foot in the Church and another in the gay scene? Is the Gay Mafia now influencing the doctrine and pastoral principles of the Church instead of bishops and priests faithful to the Gospel and Magisterium of the church? If so, we face a very grave crisis indeed. It is entirely possible.

The difficulty for homosexual clerics seeking to overturn the doctrine and pastoral practice of the Church, of course, is that such a campaign is so clearly at odds with the Tradition of the church in all ages and the crystal clear message of Scripture. This is why we are witnessing the division of the Synod into opposing camps. The Gay Mafia may wield great power at present in the high counsels of the Church but there are still brave cardinals, bishops and priests resisting them, most notably in Africa and Asia. Thus the fight for the soul of the church is on. The Gay Mafia want a change of teaching at best but will settle, one suspects, for a shift of pastoral practice under the guise of a rather dishonest understanding of mercy. The true defenders of the faith are having none of it for they see clearly that a move to betray our Lord’s Gospel is underway.

If this article has put the jigsaw together properly we must surmise that the sex abuse crisis is not over for the Church. The secular and Catholic media’s failure to report it accurately, and an over focus on paedophilia not homosexuality meant that sexually active gay men hiding behind dog collars remain free to betray their vows as priests. Having avoided exposure so far they have grown in confidence to the point they may even have called this Synod in the first place, not to speak of family life but to fight for their cause. What is chilling as we watch the second Synod unfold is that high ranking voices in the Vatican are confirming that the question of Holy Communion for divorced and re-married is a smoke-screen and that the homosexuality is the Synod’s true agenda.

Reprinted with permission from Catholic Voice.