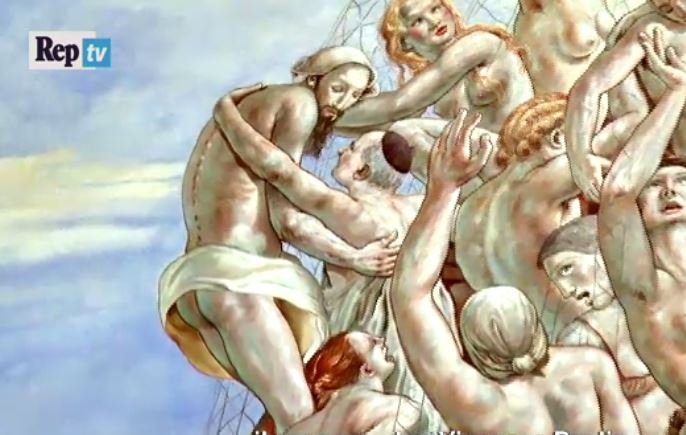 March 6, 2017 (LifeSiteNews) – The recent revelations of homoerotic, blasphemous art in the Cathedral of Terni, commissioned by Archbishop Paglia, now the head of the Vatican office that oversees the St. John Paul II Institute for Studies in Marriage and Family worldwide, raise several vital issues that need to be urgently addressed.  The protection of Catholic marriages, families, youth and the Church depend upon a correct resolution of this scandal.

To begin with, the exposition of homoerotic art in Archbishop Paglia’s Cathedral from 2007 raises the important question of how he could ever have been chosen to lead the Pontifical Council for the Family and later the Pontifical Academy for Life and the John Paul II Institute for Studies in Marriage and Family. It is now clear that he opposes the Church’s teaching on sexual morality. This question in itself requires an inquiry as to the intentions and criteria used within the Vatican for appointments under Pope Francis.

Archbishop Paglia’s use of homoerotic art reinforces the earlier views, presented to the Vatican by several Catholic mental health professionals, that Archbishop Paglia should be suspended from his responsibilities at the Vatican and be required to undergo an evaluation required of clergy who abuse youth with a focus on psycho-sexual development. This request was made because the initial Meeting Point online sexual education program for youth, developed under Archbishop Paglia’s direction when he headed the Pontifical Council for the Family, contained homoerotic and heterosexual pornography which was like that employed by adult sexual predators of youth.

The Meeting Point program was also strongly criticized because of its lack of loyalty to the Church Doctrine and St. John Paul II’s teaching on the education of Catholic youth in the sensitive area of human sexuality and because it excluded parents from this educational experience.  In our professional opinion, this program is a psychological and spiritual threat to youth. It should be withdrawn as soon as possible by the Vatican and its website closed.

In the United States the evaluations of clergy for possible abuse of youth also include a search of the personal computers of the priest.  In this most unusual case, and in view of its gravity, the computers at the Pontifical Council for the Family used in the development of the Meeting Point sexual education program for youth should be searched, as well as Archbishop Paglia’s personal computer used at that time.

However, even more troubling is the role of Pope Francis.  His apparent approval of the release of the Meeting Point program at World Youth Day with its homoerotic content and heterosexual pornography was severely negligent.

Public concern about the policies placing Catholic youth at risk of abuse has been further intensified by Pope Francis’ restoring to priestly ministry an Italian priest, Fr. Mauro Inzoli, who was laicized by Pope Benedict XVI for homosexually abusing adolescent males.  After his priestly faculties were restored, he again repeated his homosexual abuse of youth, was arrested and imprisoned.

RELATED: Psychiatrist: Archbishop behind Vatican sex-ed should be evaluated by sex abuse review board

In the United States, a member of the hierarchy who deliberately places youth at risk of abuse by a known sexual predator is expected to resign from his Episcopal ministry.  This norm is valid for all countries. In addition, such a Bishop would also face criminal charges of severe negligence for contributing to the sexual abuse of a minor, which could have been prevented.

With all due respect, it is time that Pope Francis takes a firm stand in favor of Catholic moral doctrine, publicly distancing himself from those prelates who favor homosexuality as an alternate form of love by removing them from positions of leadership in the Vatican.

Rick Fitzgibbons, M.D., is the director of the Institute for Marital Healing outside Philadelphia and has worked with hundreds of couples over the past 40 years. He was an adjunct professor at the Pontifical John Paul II Institute for Studies on Marriage and Family at Catholic University for three years and is board member of the International Institute for Forgiveness. He coedited a 2011 issue of the Catholic Medical Association’s Linacre Quarterly on the Crisis in the Church which included several articles that he co-authored on the psychological conflicts in the priests who sexually abused adolescent males, the primary victims.

Gerard J. M. van den Aardweg, Ph.D., is a prominent Dutch Catholic psychologist and psychoanalyst with a research focus on homosexuality. He is the author of On the Origins and Treatment of Homosexuality: A Psychoanalytic Reinterpretation and The Battle for Normality: Self-Therapy for Homosexual Persons.