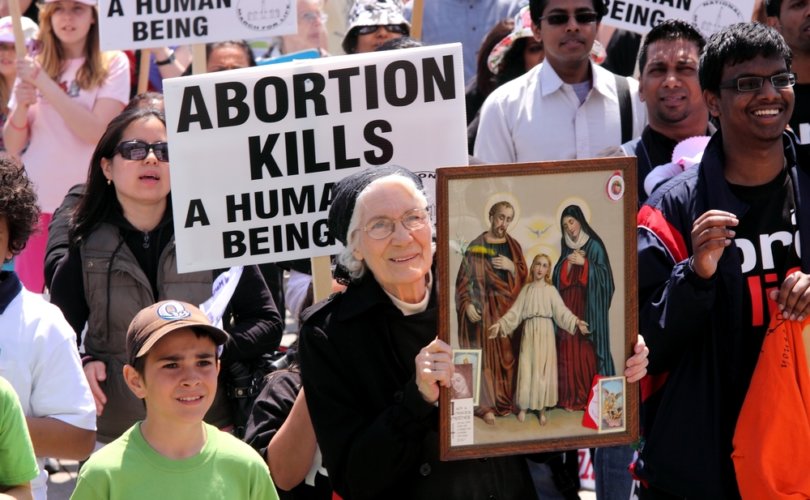 “I must repeat that I categorically reject every accusation or suspicion concerning the Pope’s alleged 'obsession' with [the issue of abortion]. We are dealing with a problem of tremendous importance, in which all of us must show the utmost responsibility and vigilance. We cannot afford forms of permissiveness that would lead directly to the trampling of human rights, and also to the complete destruction of values which are fundamental not only for the lives of individuals and families but for society itself.” – St. Pope John Paul II

July 31, 2017 (HLI) – Perhaps you have heard the following argument – deceptive and purposely misleading – from abortion supporters: “You pro-lifers are so obsessed with saving babies before birth, but you don’t lift a finger to help them after birth. While you’re so busy trying to stop abortion, you don’t do anything to help the poor, end slave labor, stop gun violence, end the death penalty, or save the environment. How can you claim you’re really ‘pro-life’?”

It’s a tiresome argument. But it’s also an effective one. Those who use it powerfully arouse people’s natural sense of justice, and then deftly turn their outraged attention to an unpopular group who, they suggest, have obsessively and erroneously focused on one “narrow” issue at the expense of all the others, thereby perpetuating injustice.

I couldn’t help but think of this tactic as I read a recent article by Catholic journalist Austen Ivereigh in Crux.

You may recall that, a few weeks ago, I wrote a column responding to another article by Ivereigh, in which he defended a recent decision by the Vatican's Pontifical Academy for Life (PAV) to appoint Anglican Rev. Nigel Biggar, who supports abortion up to 18 weeks, to the newly reconstructed Academy. I believe it was a bad decision, and still do. Ivereigh does not.

In a second article following up on the first, Ivereigh further explains the rationale behind that decision, describing how the PAV envisions significantly “broadening” its mandate. In Ivereigh’s words, this is part of an effort to help move the PAV beyond a “culture of ideological purity, even fanaticism” that has rendered it “both unattractive and ineffective” (hard words!). While the PAV will still combat abortion and euthanasia, Ivereigh says it will also turn its attention to gun violence, refugees, pollution, the death penalty, and the small arms trade.

Human Life International, for example, describes its mission as confronting the ‘evils of abortion, contraception, euthanasia/assisted suicide, and the redefinition of marriage,’ but makes no mention of the small arms trade or the death penalty…

He might well have gone further than that. He could also have observed that HLI also makes no mention of unjust wages, poor working conditions, human trafficking, government corruption, reckless overfishing of the oceans, or the scourge of predatory loan sharks in our mission statement, all of which are injustices worthy of attention.

The reason is obvious: while as individuals, HLI staff members may be gravely concerned about some or all of these issues, they simply don’t fall within our mandate.

Indeed, I doubt Ivereigh or anyone else would employ a similar argument to critique any other movement or non-profit. They would not, for instance, ask the Red Cross why they don’t put more resources into saving baby seals, or Greenpeace into feeding the homeless, or the American Cancer Society into helping refugees, or Occupy Wall Street into fighting human trafficking.

The whole argument appears to stem from a mistaken understanding of the origin, nature, and purpose of the term “pro-life.” Or perhaps it reflects a more intentional effort to redefine the term away from those roots. The result, however, is something so vast and nebulous as to be practically useless as a rallying point or descriptor of a particular movement.

It’s worth recalling that what we now know as the “pro-life” movement was originally created for one purpose, and one purpose only: to end the deliberate, legalized slaughter of innocent unborn human life, a slaughter perpetrated on such a vast industrial scale as to have no precedent in human history.

As horrific as they may be, other injustices pale in comparison to this monstrous holocaust.

And indeed, insofar as any pro-life organization has cautiously turned its attention to any other issue – embryonic stem cell research, surrogacy, contraception, euthanasia, gender ideology, attacks on marriage, assisted suicide, etc – it has been because that issue in some way directly contributes to, or is of the same kind or quality as the killing of the unborn. In all cases, we are dealing with grave, widespread, intrinsic evils, all united under the broad umbrella of bioethical issues.

The same, however, cannot be said of many of the other issues that Ivereigh believes should be imported under the pro-life umbrella. Environmental issues, gun violence, the small arms trade, poverty, human trafficking, and a myriad of other issues all certainly matter. And insofar as these injustices are perpetrated by human sin they may even share a cousinship with abortion.

But many of them are highly complex and admit of many possible solutions, and some are not even intrinsic moral evils, such as in the case of the death penalty. For as the Catechism of the Catholic Church clearly states, the Church does not “exclude recourse to the death penalty, if this is the only possible way of effectively defending human lives against the unjust aggressor.” (CCC, #2267)

To subsume all of these issues under the “pro-life” label is not to create a new, better pro-life movement. Instead, it is to fatally scatter our limited energies and resources, and to unnecessarily foment confusion and division within the pro-life ranks.

One fears that the architects of what Pope St. John Paul II called the “Culture of Death” will be only too pleased to see the Vatican’s pro-life powerhouse turn its limited resources away from the areas of their most concerted attacks.

Indeed, it is troubling that this effort to dramatically broaden the pro-life label appears motivated too much by a concern with currying worldly favor and popularity. Certainly, we must be “wise as serpents,” and make reasonable efforts to make our message as palatable to the world as possible. But this must never come at the expense of principle, or the effectiveness of the pro-life cause.

We commend and encourage those who fight other injustices in the world. But at Human Life International, we recognize the link between the intrinsic evils of contraception and abortion and their interconnections to other bioethical issues. This is why HLI’s mandate is so focused.

“Abortion flows from contraception,” said Father Paul Marx, and “once a people and nation accept contraception, abortion follows.” The direct attack on marriage, i.e. contraception, stems from a distorted vision of the human person and sexuality and has given rise to abortion and other perverse behaviors diametrically opposed to human dignity and its intrinsic value. HLI’s mission – I dare say priority – is to expose this deceptive violence and its direct attack against the dignity of marriage, and at the same time stop the legalized, industrialized, and deliberate slaughter of tens of millions of innocent human beings.

This is our mission, and, as unpopular as it may be with the world, we won’t ever apologize for it.