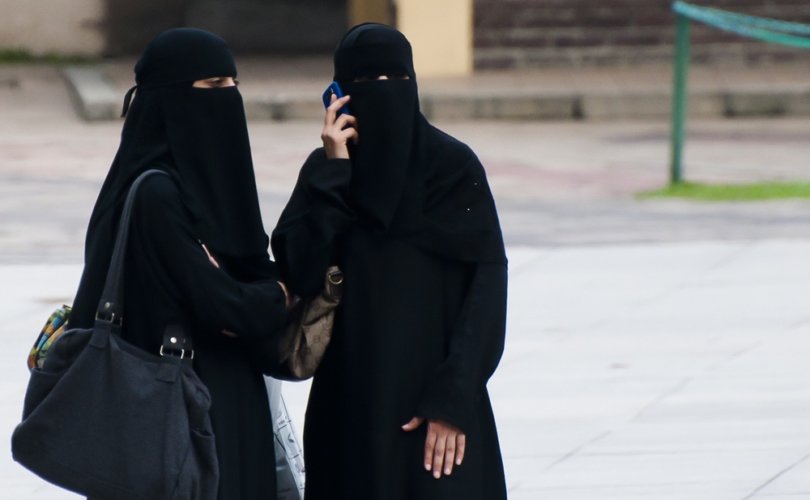 January 9, 2018 (Turning Point Project) – Secularists like to advise Christians that, for the sake of social harmony, they ought to keep their religion to themselves. Religion, they argue, is a private affair between an individual and his designated deity, and ought not to be dragged into the public square. Moreover, they helpfully add, it’s an imposition on others to confront them with beliefs that they may find offensive.

As for themselves, secularists have no qualms about imposing their own values on everyone within reach. They are convinced of the rightness of their beliefs, and consequently they don’t think twice about forcing Christian bakers, florists, and photographers to endorse gay weddings. They are also convinced that they know what’s best for your children. And what’s best for them, they are quite certain, is that they learn all the latest fashions in gender identity and marriage equality.

In his groundbreaking 1984 book, The Naked Public Square, Richard John Neuhaus argued that the public square can never be naked for long. In other words, it cannot be neutral about values: “If it is not clothed with the ‘meanings’ borne by religion, new ‘meanings’ will be imposed by virtue of the ambitions of the modern state.”

In short, the committed secularist won’t be satisfied with the removal of the crèche from the town square. He’ll insist that it be replaced with something that more accurately reflects American diversity—say, a monument to Margaret Sanger or a statue of James Obergefell. Of course, secular society’s reach extends well beyond the town green. The religion of secularism is constantly being advanced in a variety of venues—in courtrooms, school rooms, and in the newly remodeled bathrooms that accommodate the newly invented genders.

Fr. Neuhaus was right in predicting that “a perverse notion of the disestablishment of religion leads to the establishment of the state as Church.” The secular state quickly moves to enshrine whatever values it currently smiles upon. And it defends them as though they were divinely revealed dogma. But, despite his prescience, Neuhaus did fail to anticipate another development—namely, that the Judeo-Christian tradition might be displaced from the public square not only by the state, but also by another religion.

The possibility that Islam would one day be a contender for control of the public square probably didn’t enter his mind. That’s no surprise. Except for the blip caused by the Iranian Revolution, Islam wasn’t on anyone’s radar in the early eighties. Yet Islam is now well on its way to controlling the public square in parts of Europe. And, were it not for the election of Donald Trump and the defeat of the Muslim Brotherhood-friendly Clinton machine, the U.S. would now be playing catch-up.

As has often been observed, Islam is a political religion. Some, like Dutch MP Geert Wilders, contend that it is almost totally political with only a thin and deceptive veneer of religiosity. Whatever the exact proportion of politics to religion, it’s hard to deny that the political dimension looms large in Islam. Muhammad, after all, was a warlord. He conquered all of Arabia, and within a relatively short time after his death, his followers conquered an area larger than the Roman Empire. Sayyid Abul A’la Maududi, one of the most important twentieth-century Islamic theorists, wrote that “Islam requires the earth—not just a portion, but the whole planet.”

But, although Islamists think globally, they are patient enough to act locally. In European cities these days it’s not unusual to be forced to take a detour because the street ahead has been blocked by Muslims kneeling in prayer. Ostensibly, these gatherings are meant to demonstrate that there are not enough mosques, and that therefore the government must pay for more to be built. The ulterior agenda is to stake a territorial claim. It’s the Islamic version of “we’re here, we’re queer, and we’re in your face.” In this case, “We’re here, there are quite a number of us, and we’re ready for a confrontation. Give us what we want, or we can make your life unpleasant.”

Sometimes, the public square is literally a public square, or a street, or a park. Controlling the public square does not necessarily entail control of geographical territory, but it helps. And Muslims actually do control an increasing number of the public streets on the continent. When Muslims migrate to Europe, they tend to congregate in ghettos, some of which have earned the label “no-go-zones” because they are largely off-limits to non-Muslims. As Europeans are now discovering, such concentrated population pockets provide quite a bit of political leverage.

Some observers say that these Muslim enclaves are part of a deliberate strategy to Islamize Europe. They act to deter assimilation, and they allow Muslim leaders to gain a high degree of control over the Muslim population. In addition, the “zones” facilitate the formation of voting blocs and make it easier for Muslim activists to apply pressure to local and national governments.

Like secularists in the U.S., Muslims in Europe and the UK are accustomed to making demands, and equally accustomed to having their demands met. Whether the demand is for halal menus, prayer rooms in schools, special washing facilities, or exemption from Holocaust studies, European Muslims usually get what they want.

Islamists and secularists share a desire to monopolize the public square. Both also see Christians as a particular enemy of their expansionist ambitions. Consequently, both seek to minimize the influence of Christianity in the public square. Although Muslims in the West lack the numbers to directly limit the influence of Christians, they can do so indirectly by letting it be known that they are mightily offended by various Christian beliefs and practices. They can then rely on state and local authorities and lukewarm Christians to do the rest.

Secularists are already inclined to de-Christianize Christmas, and the fact that many Muslims are offended by Christmas gives them an excuse to speed up the process. In Luneburg, Germany a school Christmas party was postponed because a Muslim student complained about the singing of Christmas carols. In London, the All-Party Parliamentary Group on British Muslims issued a report aimed at drawing attention to the humanity of Muslims during Christmas. The report was titled “A Very Merry Muslim Christmas.” In Langon, France, teachers pulled 83 students out of a showing of The Star, an animated movie about the birth of Jesus, once it dawned on them that the subject was “too Christian.”

In Muslim-majority countries, restrictions on Christians are much more severe. Christians who try to take their religion with them into the public square risk jail or even execution at the hands of vigilante mobs. This attitude goes back to the beginnings of Islam—to the “Conditions of Omar” which were established by the second Caliph shortly after the death of Muhammad. The “Conditions” were a list of “dos” and “don’ts” that governed the lives of conquered Christians. Among other things Christians:

These rules, which are now being re-established in many Muslim countries, display an attitude toward Christianity that is quite similar to that of today’s secularists: keep it quiet, keep it to yourself, and keep it out of the public square. For the time being, Muslims and secularists are working in tandem to exclude Christians from the public squares. If and when that goal is accomplished, Muslims in the West will almost certainly move to push secularists to the sidelines. Once they have served their purpose, the services of committed secularists will no longer be needed.

But for the time being, Christians still have time to recognize the double threat and reassert their own values and beliefs. Thanks to Richard Neuhaus, many Christians do understand the importance of the public square. They realize that they can’t afford to confine their faith to church and home because if they do, they will eventually be safe neither at church nor at home. There are very practical reasons for Christians not to hide their light under a bushel.

This article originally appeared in the January 2, 2018 edition of Crisis.

Reprinted with permission from the author.