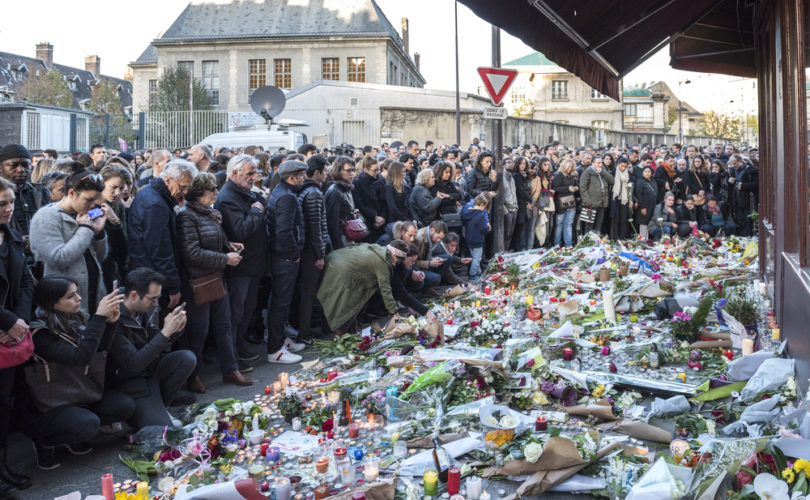 People in front of the Bar Hotel Le Carillon street Alliber in tribute to victims of the Nov. 13, 2015 terrorist attack in Paris at the Bataclan.Frederic Legrand - COMEO / Shutterstock.com

PARIS, November 20, 2015 (LifeSiteNews) — The Paris terrorist attacks are one week old tonight. A form of psychosis has seized the French capital: the big department stores have seen their sales plummet as tourists avoid popular venues. Restaurants and cafés are struggling to get by with 50 or 60 percent less customers, and even my local supermarket was almost empty on Thursday evening at its usual rush hour of 7 p.m. It’s not that people are mourning because of what happened. They are worried about what is still to come. There are millions of Muslims in France, with many more coming in due to the “migrants’ crisis” goaded on by Germany’s chancellor, Angela Merkel. It was she who insisted that the hundreds of thousands of Africans, Syrians, Iraqis… who are dreaming of peace and a better life in Europe, should be welcomed in. Several terrorists had come along with the stream.

Consciously or not, everyone is waiting for the next shooting spree or the next suicide bomb. Last time around, when the attack hit Charlie-Hebdo, people weren’t so scared. Those who died, after all, had been targeted as “blasphemers” against the “Prophet.” On Friday night, the victims were ordinary, carefree Parisians enjoying drinks or supper on a mellow autumn evening in one of the more trendy quarters of Paris; there were students and young professionals; fans of “Eagles of Death Metal” who were enjoying a rock concert at the well-known venue, Le Bataclan – but more about that later.

A meeting of the Association of French Mayors this week, days after the horrific events in Paris, came up with an idea: let’s ban Nativity scenes from all public places.

These were people many can identify with. From now on, anyone can be a target.

The faces of the eight known terrorists and suicide bombers who killed 130 people in six coordinated attacks are both familiar and frightening: frightening because they are familiar. There are so many of those faces in the suburbs of Pais and of all the large French towns. So many veiled women, so many young men wearing traditional Arab garb and Mohammad-like beards.

The French authorities are falling over themselves saying there is no link between Islam and last week’s dramatic events. The killers – so the story goes – are in no way representative of the religion they invoke and Allah would not agree. Islam is a religion of “tolerance” and “love,” the saying goes. Government members avoid even mentioning Islam when speaking about the attacks.

This is where schizophrenia sets in. While pleading for “Fraternity,” especially with France’s immigrant Muslim population, the powers that be also insist that “secularism” – laïcité – is the only possible answer to Friday’s attacks. But if absence of religion, in the public square at least, is France’s only hope today, that means the war being fought by Jihadists is a religious one: a “Holy war.” And so it is, in their eyes: a war against the decadent West in which they also see Islam’s ancestral enemy, the “crusaders.”

Modern-day France, it does not need to be said, has no “crusaders” and precious little believing and practicing Catholics. If Islam, and radical, Koran-following Muslims have gained ground here it is not primarily because of social problems and poverty in the suburbs, as the authorities would have it: it is because of the gaping void left by the steady abandonment of Christianity and respect for life and traditional values.

The killers in Paris’ trendy 11th arrondissement and the Bataclan were mostly brought up in French or Belgian State schools where secularism is obligatory, even if Muslim communities are strong enough to obtain de facto privileges in a number of schools, like halal meals at the school canteens and a flexible response to absenteeism during Islamic holidays.

With the new attack, the French government’s main response is to give them more of the same: more “secularism,” Prime Minister Valls insisted, more “Republican values.” “We know that the battle to confront the ruptures in our society and this rise of radical Islamism, to defend our values and secularism, comes through schools and through culture,” he told the press last Tuesday.

Secularism has been part and parcel of the French State education system since teaching religious congregations were violently cast out at the end of the 19th century and the Republic took over the education of France’s children. Since then, the religious have come back and there is now a thriving, but not always outspoken network of Catholic schools that remain under pressure of the State – which pays the teachers – and are required to follow stringent rules and official curricula. Schools with full freedom also exist, marginally, but receive no financial help at all.

Putting all religions on the same plane and placing secularism above them as a requirement for the French to be able to live alongside each other in peace has long been a main feature of the public, free education system. With the arrival of François Hollande and his socialist government, things became – if possible – even worse. Former Education Minister Vincent Peillon, to whom “secularism is a religion,” said in 2012: “The objective of secular morals is to allow each pupil to emancipate himself, because the beginning point of secularism is in absolute respect of the freedom of conscience. In order to give liberty of choice, one has to be capable of tearing pupils away from every deterministic constraint pertaining to the family or ethnicity, social and intellectual, so as to make choices after that.”

Peillon introduced the teaching of “lay morals” – which have nothing to do with natural law but with relativist respect for all opinions and “non-discrimination” – and his successors have created a “charte de la laïcité”, a “Charter for secularism” which all parents are expected to sign when entering their children in State schools. But laws exist – even though they are not fully implemented – that allow the State to control what is taught to any child in France, be they home-schooled, in an independent, Catholic or State school.

“Secularism” and “the right to blaspheme” were France’s answer to the January attack against Charlie Hebdo. Secularism is being brandished again as a correct and non-discriminatory response to Fridays’ killings.

Already, several French media have drawn parallels between the madmen of Allah and Catholic traditionalists or just Christians – those who participated in the “Manif pour tous” against same-sex “marriage.” A popular child psychiatrist, Aldo Nouri, told parents to talk with their children about the attacks, and to explain that radicalism and extremism can be found anywhere. Tell them, he said, that many religions have killed in the name of their faith; also Catholics and even atheists, in Russia.

He did not evoke the “Terreur” in France through which the Revolution subdued revolts in the 1790, killing thousands of Catholics, priests, religious and laypeople…

Acting against the Muslims while pretending not to: this is one way the call on secularism as a solution can be seen. But in practice, this relativist stance has disarmed France and is opening the way to persecution against the faithful of its historic religion, Catholicism.

This already exists insofar as pro-life and pro-marriage campaigners are brushed aside as backwards fundamentalists who are trying to force their religious views on the “secular Republic.” Because Muslims pray in a number of streets in Paris and elsewhere, a communitarian display of force, Front National leader Marine Le Pen – whose star is on the ascendant – has said she also opposes Catholic pro-life public prayers in the streets.

France is not exactly choosing the path that will allow it to stand up to terrorism with its true values.

The main terrorist attack last Friday happened at a rock concert when the American group Eagles of Death Metal, which had attracted 1,500 spectators at the Bataclan, were just beginning to sing their hit, Kiss the Devil. The lyrics might have been written as a joke but the words are clear: “Who’ll love the devil? Who’ll sing his song?… I’ll love the devil and his song.”

A diocesan priest, Fr. Hervé Benoît, commented on the news site Riposte catholique : “Look at the photos of the spectators, moments before the tragedy… They are living dead. Their assassins, the ‘haschishin zombies’, are their Siamese twins. How can one not see this? It is so obvious! The same uprooting, the same amnesia, the same infantilism, the same lack of culture… A drama of atheist humanism, that loves the devil, death, violence, and says so – and died because of it. The sign of death and chaos does not only hover over Paris on a cursed Friday evening. 130 deaths are horrible. What about 600 deaths? That’s the amount of abortions in France on that same day.”

At the Bataclan, another song was to have been played: “Save a prayer.” “Don't say a prayer for me now /Save it 'til the morning after.” Many foreign heads of state sent their condolences to France with a prayer. The French leftwing press has rejected those prayers saying France needs everything but.

A meeting of the Association of French Mayors this week, days after the horrific events in Paris, came up with an idea: let’s ban Nativity scenes from all public places. Having a proper law to make sure that no town hall can have a “crèche” at Christmas was one of the major proposals made in a report that the Association had been working on in the wake of the Charlie-Hebdo attack in January. Their “Guide for good secularist conduct” was presented on Wednesday and their president, Republican François Baroin, explained: “It is up to us, who are elected and close to the population, to hold up secularism, which is at the same time a condition for community life and a means to emancipate human beings.”

That is how secularism gives in to Islam.