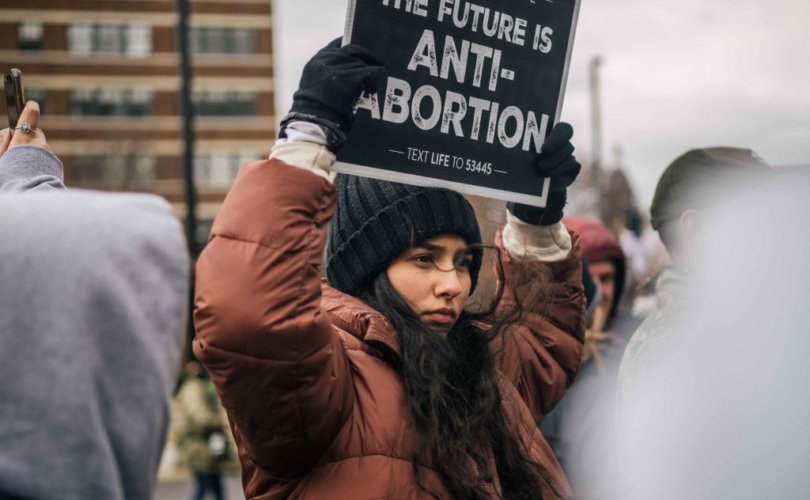 (Live Action) – While abortion advocates claim that abortion is nothing more than routine healthcare, many women who have had abortions report pain, trauma, and regret that can last for years.

Live Action’s “Can’t Stay Silent” campaign is giving a platform to their voices. Here are two more of their stories.

Tori’s story: ‘You’ll carry an abortion for the rest of your life’

After finding out that she was pregnant while a senior in high school, Tori said that her mom and her doctor decided with her that abortion would be the best choice – though she doesn’t remember discussing any other options. Less than 24 hours after discovering she was pregnant, she was taken to an abortion facility.

Once inside, she remembers carrying around a box of tissues because she was crying, and a trash can because she was so sick. She says the procedure room was very dark and felt nothing like a doctor’s office. “I was scared. I was so scared,” she said.

Before the abortion started, she asked the nurse if she could see the ultrasound, but the nurse only said, “That’s not a good idea.” Taking her advice, Tori didn’t look.

She then described the procedure, saying, “I had a vacuum aspiration abortion and it was extremely painful. I felt like it would never end. I remember the doctor yelling at me because I was in so much pain I was just kind of lifting my body off the table, and she was saying, ‘You’re just going to make it take longer.’”

After the abortion, Tori was taken to a waiting room filled with women who had just had abortions. “Some people were throwing up, some were just kind of passed out, but nobody was ok with what they had just done, I don’t think.”

Tori also remembers exiting the building from a different door. “I don’t think they wanted anyone in the waiting room to see the women leaving. Because honestly, they might not stay if they saw the women.”

Afterward, she went through a long period of denial and pretended like it didn’t happen. “I was just kind of numb to it, and a little bit relieved maybe that it was over. But it wasn’t over.”

Tori says she began to self-medicate using drugs, alcohol, and by engaging in other destructive behaviors. It wasn’t until she gave birth years later that she began to realize the enormity of what she had done. “It took my breath away and changed my thoughts forever about abortion… Once I saw those little toes and those little fingers, I knew what I had done, and I knew it was wrong.”

Healing eventually started to come through a bible study she attended with a friend. Later, Tori decided to share her abortion story on her blog and was overwhelmed with the gracious response of so many readers. She was surprised to find that her testimony helped many others in the same situation. This led her to start a post-abortive bible study at her church. She now runs a group called Not Forgotten Ministries and holds post-abortive bible studies a block and a half away from Planned Parenthood.

“God is never done. I continue to find new levels of freedom and healing. He continues to bless my heart as I minister to other women who have been in this situation. This healing journey has been so incredible. And I was so afraid of it. If I could go back and tell myself one thing, I would say ‘Don’t be afraid of the journey. Because it’s going to be so much better than you could ever imagine. God is going to use your pain for something purposeful and something really good.’”

Tori also says that she always tells pregnant women, “You’ll carry a baby for nine months. But you’ll carry an abortion for the rest of your life.”

Serena’s story: ‘I remember hearing my baby being sucked out of my womb’

Serena was 15 when she found out she was pregnant. Though she wanted to keep her child and was very against abortion, she experienced intense pressure from her parents to end the pregnancy. “I was very, very traumatized and devastated when my parents reacted the way that they did to my pregnancy,” she said.

Finally, after her dad threatened to kill himself if she didn’t get the abortion, she consented.

Her parents brought her to a Planned Parenthood, which she describes as being dark and drab. Serena was so upset in the waiting room that she began to sob loudly, creating a scene. Once in the procedure room, she said she saw her baby’s fluttering heartbeat on the ultrasound monitor. At that moment, she told the nurse that she couldn’t proceed with the abortion. The nurse then stopped the procedure and sent Serena home with her parents.

Though she had successfully avoided her first abortion attempt, Serena said the pressure at home intensified until she finally relented again. This time, her parents brought her to a different abortion facility where there was no ultrasound monitor. When it was time for the procedure, she was strapped to the bed. Serena distinctly remembered that the abortionist entered the room and did not look at her or speak to her. He committed the abortion and then left the room.

“I remember hearing my baby being sucked out of my womb and into that machine that he turned on,” she recalled. She noted that the procedure was very painful, and she felt such shame from the callous way in which the doctor had treated her.

“The grieving process was very hard because I did it all by myself,” she said about the time after her abortion, though she noted that she sketched a picture of what she saw on the ultrasound monitor and wrote a poem apologizing to her baby.

After that, she tucked her secret away, saying, “I tried to just move on and pretend like it never happened.”

Despite her attempts, Serena was unable to stifle the anxiety, depression, and suicidal thoughts that plagued her. “I used to think about taking my life all the time after my abortion.”

She said her life went on a downward spiral after high school, and she did everything she could to numb the pain, never realizing that the pain was a side effect of the abortion.

When she was 28, Serena started to see the need for healing. “Everything was great, but there was still this empty hole inside of me,” she said. Eventually, after confiding in some women at church, she set on the path of post-abortive healing, involving herself in a healing ministry, book study, and counseling.

“I just want women to know that there is hope and there is healing like there was for me,” she said. “I realize now… that abortion did not help me. It did not secure my future. It did not make my future better. It hurt me, and it hurt my future. It actually stole and robbed a precious human being that should have been a part of my life. And that’s something I can never change or get back.”