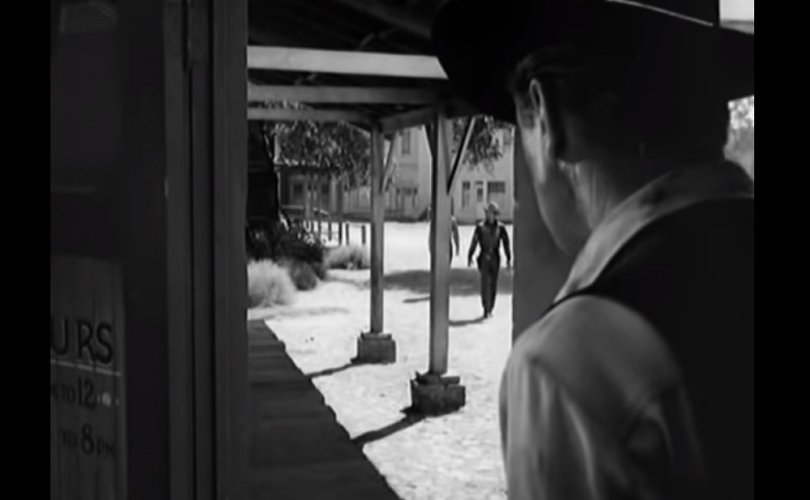 Elizabeth
A.
Mitchell
Elizabeth A. Mitchell

July 31, 2019 (The Catholic Thing) — In the 1952 classic Western High Noon, Will Kane, the marshal of Hadleyville, has a choice to make. The rule of law has unraveled, and Kane knows what he is up against. Outlaw Frank Miller and his gang are arriving on the noon train. So Kane visits the upstanding men of the town, asking them, one by one, to stand with him to defend their town. But no one will stand with him. They walk away and leave him, either through fear or the futile hope of keeping the peace or out of allegiance to Frank Miller himself.

In the Church today the Rule of Faith, together with the Rule of Law, the unchanging Tradition handed down from the Apostles, which is the guardian of the Truths of our Faith, has begun to unravel. As the highly anticipated October synod on the Amazon draws near, it is High Noon for the universal Church. High Noon is an appointed time. It is an appointed place. When High Noon strikes it is not an accident or an unfortunate misunderstanding. It is a well-anticipated event.

“Our time is characterized by an acute spiritual hunger of the Catholic faithful all over the world for a reaffirmation of those truths that are obfuscated, undermined, and denied by some of the most dangerous errors of our time,” state Cardinals Raymond Burke and Janis Pujats, Bishop Athanasius Schneider, and a few other courageous churchmen in their Declaration of the Truths Relating to Some of the Most Common Errors in the Life of the Church of Our Time. The faithful “feel themselves abandoned and thus find themselves in a kind of existential periphery[.]” “A public declaration of the truths regarding these errors,” therefore, “cannot admit of further deferral.”

If the Truth is about to be unraveled on the Amazonian periphery, as all signs from the Instrumentum Laboris for the Amazonian synod indicate, the obfuscating outlaws must be faced down, as Cardinals Walter Brandmüller and Gerhard Ludwig Müller, as well as Bishop Schneider, have done in several important public declarations.

Every time the Truth is clearly proclaimed and forthrightly defended in the ecclesial Wild West, in fact, it is High Noon on the existential peripheries. The clarity of the Truth, stated unambiguously and unequivocally, proclaims the living and life-giving power of the mysteries of the Faith, the Rule of Faith, safeguarded and promoted by the Church's discipline, the Rule of Law.

The law, in its essence, demands the light of High Noon. The light disposes us to dispel the darkness and fear, and to call upon the help of God in our daily battle “against the principalities, against the powers, against the world rulers of this present darkness, against the spiritual hosts of wickedness in the heavenly places” (Eph. 6:12). “For the commandment is a lamp; and the law is light.” (Prov. 6:23)

Fr. Thomas Weinandy, O.F.M. Cap., gifted storyteller, and renowned theologian, recently told me about the way he and his childhood friends used to play at acting out the High Noon showdown:

Invariably in the midst of our play, the final 'scene' was a show-down in the street — it was a short dead-end street so there was little traffic. The good guy was compelled by his goodness, for what was right and just, to go out into the street and face the bad guy. He had no choice. The bad guy could not be allowed to win the day. So with gun belted at his side, the good guy left our make-believe saloon, swung open the saloon door, walked into the street and confronted the bad guy.

Yes, it was all make believe, but in that play I learned that the good guy, when High Noon strikes, cannot remain in the saloon sipping whiskey and playing poker, but is compelled — he has no choice — to step out into the street. In our play the good guy always won the showdown. In real life that is not always the case — but he is still the winner, for he had the courage to stand tall for what was good and right and just, and face down the evil at hand.

There is something simple and uncomplicated about High Noon. The marshal is compelled to step into the street. His duty and his office compel him. He has, as it were, no choice. High Noon is High Noon because the marshal shows up.

The showdown takes place in broad daylight, in the middle of the street, in full view of the entire town. But where are the good townspeople? Is the town deserted and abandoned as the marshal steps into the street? No. The entire town is watching the showdown. They are watching from behind their drawn parlor curtains. They watch and they wait.

The cardinals and bishops who wait and watch the doctrinal showdown at hand, interested to see who will draw first, might as well be sipping whiskey in the saloon, or peering out from behind red velvet curtains. The very Truths which they were deputized to defend, and their Bride, are at risk. And if they are unwilling to leave the poker table, it's the duty of remaining clergy and even the laity to step out into the street.

“Before the eyes of the Divine Judge and in his own conscience each bishop, priest, and lay faithful has the moral duty to give witness unambiguously to those truths which in our days are obfuscated, undermined, and denied,” the Declaration urges.

High Noon demands men “with direct eyes” (in the words of T.S. Eliot's The Hollow Men) — clear-eyed individuals who know God and His unchanging Truth, who speak and act with clarity, men who step forth boldly in their duty. The marshal's “direct eyes” do not flinch. He answers the call of High Noon.

The moment the showdown is won in High Noon, the townspeople rush from their shuttered parlors and rejoice in the street, thanking the marshal for his bravery. He climbs onto his buggy, his bride at his side, and rides away without a single word.

He has done his duty. He has faced down Frank Miller and his gang. When High Noon strikes, the law is safeguarded by the marshal's clear stand for the good of all.

And it is High Noon because he shows up.