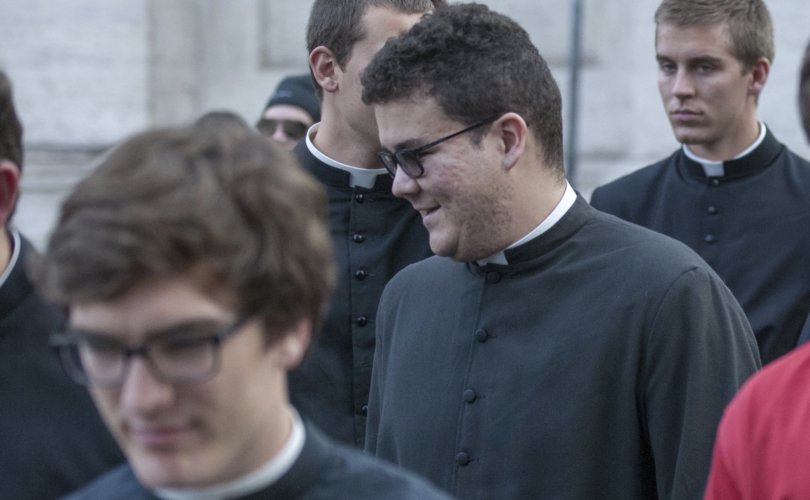 December 23, 2019 (LifeSiteNews) – At last, the burden of end-of-semester exams for the seminarians was lifted, so the atmosphere was rollicking and festive at the Virginia retreat house buried in the heart of dead winter corn fields. As an invited guest trying to find sleep at around midnight, a guitar-playing seminarian sang, with full-throated gusto, the Cranberries, “Zombie” from the Great Room down the hall. Then came Pearl Jam. Geldings and mares, I imagine, were awakened from beneath the starlit farmland that surrounded us.

The 50 or so young men from various seminaries had been invited by their local ordinary to gather for fellowship and well-earned unwinding before spending Christmases at home with family. So I didn’t mind that the late-night soundtrack outside my door was fall-out-of-the-chair fits of laughter.

Perhaps that’s why the noiselessless the following morning seemed startling. Ten minutes prior to Mass, the seminarian-overstuffed chapel was quieter than the far side of Pluto. Their solemnity seemed carved from the souls of a caravan of desert monks.

Then I took note of two things unfolding simultaneously — these young men were staring into a fixed point in space while training their eyes on two objects — the crucifix and the tabernacle.

And St. Joseph came to mind.

Beneath the cold blanket of stars en route to Bethlehem, the new Eve held the Eucharist within her womb. Without even knowing it, I thought that morning, Joseph was the patriarch protecting the future Church, who sat sidesaddle on a beat-up mule. Within that womb was the cashmere blanket of dogma, doctrine and the redemption of humanity.

These solemn-faced seminarians — who just hours earlier had exuberance pouring out of them — now seemed a chivalric army of wordless St. Josephs. It seemed they were in steely-eyed protection mode this cold early morning. During this late hour of the Advent season, these men seemed to be quixotic protectors of the vulnerable infant King, the yet-unseen Light to the world.

At the same time, these men also seemed to me protectors of a vulnerable Church. In these dark and confusing days of gross mediocrity and a muted prophetic voice, these young men seemed to me capturers of receding Light. And the stronger ones — the well-formed seminarians who seemed like Secretariat at the starting gate (you see it by the light in their eyes) — they know they must halt the piecemeal blowing out of Tenebrae candles in the Catholic Church. This poisonous unseen movement, like the creeping, deadly spreading of silent German WWII gasses — subterannean rectory evil, active clergy homosexuality, love of money and comfort, sloth, the bachelorhood mentality — it must be killed off. A forsaken and heartbroken laity must be healed. Mary’s tears must be stopped.

And whether or not these men appreciated it, I shared with them what came to my mind that morning. Unlike St. Joseph, who wasn’t a martyr, I told them it was time they considered it.

“An icon of martyrdom needs to be built into your soul now. And as you move through seminary life, that icon should be visited daily. It should be nourished,” I suggested. “So when you crawl into the skin of Christ as a priest of God, you can more easily say, ‘Now it’s time for me to die.’”

Today’s well-formed seminarian understands this necessary dying process; the thought of it courses through their bloodstream. And that’s why Catholics worldwide should be both heartened and hopeful during this wintertime in the Church. Intentional seminarians — the ones who laugh and sing and break up with girlfriends and leave comfortable lifestyles and well-paying jobs — they know their role: when the anchor drops and they become priests, they know to die.

St. Joseph protected the Church that lived in Mary’s womb. The strong seminarian wouldn’t dare mention it, but knows he has his work cut out. Because so many modern-day Josephs — fathers, shepherds, clergy, and those in and around the Vatican — have failed so miserably in protecting the Church, he knows he must view the culture as a farmer overlooking his acres of unplowed fields.

The angel commanded Joseph in a dream, “Take her into your home,” and whether or not he fully understood heaven’s messenger, Joseph knew he was to work at guarding something special and unique. So whether he assumed his fatherly role in a stable, or in fleeing to Egypt, or in presenting in Simeon’s temple — Joseph stayed in working protect mode. Jesus Christ, the Savior of the world, was within his arm’s length. So he stayed close — working alongside Him — for as long as he could. Son, could you grab the mallet and tap the center of this joint between the table leg and apron?

The strong seminarian knows he’ll be entering into the real-life grind due to the spiritual amnesia in which today’s unsettled world lives. As Joseph stayed close to Jesus in the hot sun of Nazareth, the wise seminarian stays close in the silence of his seminary’s adoration chapel. It’s there, he knows, that his spiritual childhood is becoming shaped into a spiritual fatherhood that embraces martyrdom.

“The priest who burns with the love of Christ endures a daily martyrdom,” a prayerful priest told me last week. “The cross he carries is his own weak flesh, the thorns in his crown are the ferocious temptations of the evil one — and the spear which pierces his heart are the sheep who will not follow.”

The wise seminarian knows that his martyrdom must be white before it can be red. He knows his dying won’t be of the head-on-the-block variety. For now it will be the martyrdom of availability and spiritual fatherhood, as he attempts to bring to order a world of disorder. To attain this, he knows he must awaken in darkness each morning for the remainder of his life to fall into the prayer that will sustain, guide and sanctify him. Thereafter — moment after moment after moment — he knows he must daily take on the blizzard of obligations of a true spiritual father. His cell phone is never turned off, so when the 3 a.m, emergency call comes, he’s out the door where a devastation, death, or possible miracle awaits.

So all will be white for a while, until things begin to turn red.

I was at a retreat last year with one of these recently-ordained seminarians. He told a short story that I won’t forget. And I imagine the 90-plus other men won’t forget it either.

“The other day, we were having a great time at my dad’s birthday,” the young priest said. “I wished my old man happy birthday. So he comes up to me later and said he wants me to be around for another 40 or so years so I can go on to be a good old priest one day. I said, ‘I’m not gonna make it to old age, Dad.’ He said, ‘What are you talking about? Your health’s fine.’ I said, ‘I’ll be martyred by then.’”

The priest spoke this like someone requesting cream for his coffee. And I know the reason for his casualness. He is funny, handsome, athletic and masculine in the truest sense of the word.

But here’s why he knows he must die: like St. Joseph wrapping his muscled arm around Jesus’ shoulder — this priest has committed himself to working long and dry days while also staying close to Jesus in the Holy Hour. Daily, it is in his small rectory chapel that God is carving him into a saint. He is being fortified as Jesus impresses upon him the virtues of the High Priest; he is being given His Sacred Heart so his own heart can be transformed into the One he adores.

This priest needs this outpouring of Christ’s Blood and being. Because he knows he is walking into a world that is increasingly beginning to turn on him; even hate him and everything he stands for.

Kevin Wells is the author of The Priests We Need to Save the Church, released by Sophia Institute Press in 2019.