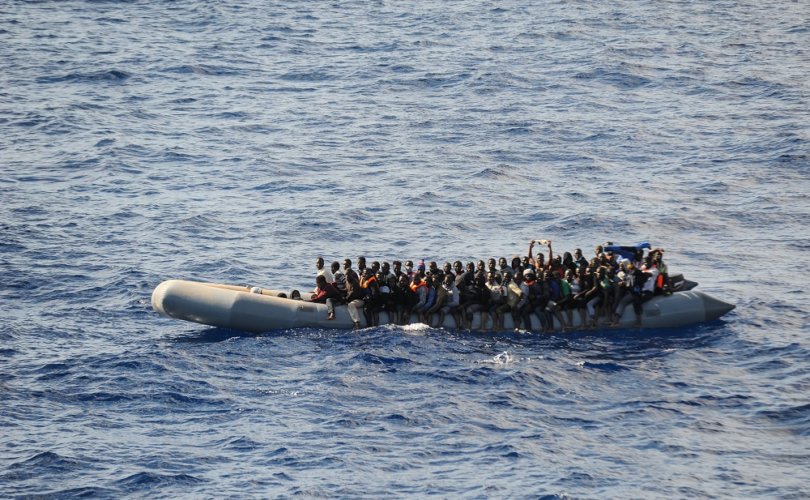 This article originally appeared in the April 9, 2018 edition of Crisis. It is published here with permission from the Turning Point Project.

March 25, 2020 (Turning Point Project) — In a number of talks and statements over the years, Pope Francis has scolded Europeans for their fear of immigrants. He came back to that theme early in March following electoral gains by “anti-immigrant” parties in Italy. According to a Reuters report, “Pope Francis on Sunday expressed concern over national policies dictated by fear.”

In his recent comments, Pope Francis said, “the world today is often inhabited by fear… And fear often turns against people who are foreign, different, poor, as if they were enemies.” Yet Italians and other Europeans don’t seem to fear people who are different per se. The fear they have is a highly specific one. It doesn’t lump all foreigners together, but focuses rather on a specific group.

A survey by Chatham House shows that the majority of Europeans want a total and permanent halt to Muslim immigration — not Hindu immigration or Chinese immigration. This specificity suggests that the problem lies not with the Italians, French, English, Germans, and Dutch, but with Muslims. Or — more specifically — with something in Muslim culture. That something is Islamic ideology. As Europeans are finally coming to realize, Islamic ideology is thoroughly incompatible with Western values. Indeed the Koran instructs Muslims not to associate with non-Muslims who are regarded as “vile creatures.”

One of the misleading assumptions of our times is that fear is born of ignorance. Its corollary is the belief that increased education or increased familiarity with the “other” will banish fear. For example, after the Italian election results, Cardinal Parolin, the Vatican Secretary of State, said that the Church would have to continue its “work of education.”

But, in fact, Italians along with Germans, French, Brits, Dutch, and so on have been drenched for decades in the kind of education that Cardinal Parolin favors. A large part of the curriculum in European schools is devoted to teaching youngsters to respect different races and cultures. Indeed, many European students are given the distinct impression that other cultures are morally superior to their own.

Cardinal Parolin and others in the hierarchy seem to subscribe to what might be called the Rogers and Hammerstein school of race relations. In South Pacific, Lieutenant Cable laments the prejudice he will encounter should he marry his Asian sweetheart:

Yet for years, European children have been taught exactly the opposite. They have been taught not to be afraid of people of different races. They have been taught to welcome people from other cultures. And, by and large, it has worked. Europeans have extended a welcoming hand to immigrants. For a long time it even worked in regard to Muslims — until it didn’t. Eventually, it occurred to many Europeans that their own experience and their self-acquired knowledge contradicted the Pollyannaish view of cultural differences they had learned in school. They discovered that cultures were not all basically the same. The problem, as they came to realize, was not with racial or ethnic differences, but with ideology. After all, Islam is not a race. Muslims come from a variety of racial, ethnic, and national backgrounds. Race wasn’t the problem. The problem was with the Islamic value system — a system that convinced young men that they could serve God by raping girls and running down pedestrians.

The more familiar Europeans became with Islamic ideology and its consequences, the more they came to fear it. Their experience has been the very reverse of another Rogers and Hammerstein song — the one that goes:

Nice sentiments. But it doesn’t always work that way. For example, the more that Jews in Germany became familiar with the Nazis and their ideology, the more they properly feared them. Likewise, Poles, Hungarians, and Czechs were right to fear the communist takeover of Eastern Europe. Unfortunately, many Europeans and Americans were not fearful enough about the twin threats posed by Nazism and communism. Their naiveté and lack of prudent fear was a major factor in enabling first the Nazis and then the communists to enslave half of Europe.

The same might be said of the pope’s almost complete lack of rational, prudential fear. By encouraging people not to be fearful of a real danger, the pope only adds to the danger. For example, attacks on European Jews have risen sharply in recent years. Jews in Europe are fearful once again — not because of some irrational prejudice on their part, but because of the rise of an ideology every bit as anti-Semitic as that fostered by the Nazis.

Jews are not alone in their fears. The victims of Muslim immigrant crime include Christians, Hindus, agnostics, men, women, children, the handicapped, the elderly, and babies in carriages. According to many verses in the Koran, all non-Muslims who have not submitted to the rule of Islam are legitimate targets. Some teen-age victims of Muslim rape gangs report that their abusers quoted the Koran to them in justification of the abuse. Because of mass Muslim migration of the type that Francis favors, thousands of girls have been raped in England alone. Indeed everyone is at increased risk: concert-goers in England, families celebrating Bastille Day in France, shoppers at Christmas markets in Germany, pedestrians in Barcelona, and train and subway passengers all over Europe.

As he often does when encouraging migration, Francis relies on religious sentiments to overrule both statistical evidence and common sense. One of his favorite themes is that the face of the migrant is the face of Christ. Another theme is that Christ wants us to welcome the migrant “with arms wide open.” But how does he know that Christ wants us to welcome millions of strangers all at once? Christ admonishes us to welcome the stranger, but he has nothing to say about mass migration. Does the verse about welcoming the stranger mean that Europe must take in more Muslims than it can possibly assimilate? Is it the will of God that Europe be turned into an Islamic colony? That’s what will likely happen if the pope’s “open arms” and open borders recommendations are followed.

Even if we think of Christ’s words as applying only to individuals, it seems safe to assume that he expects us to exercise some prudence. Must a widow with two young daughters take in three suspicious looking strangers? When welcoming strangers, doesn’t Jesus want us to use our reason and weigh the evidence? Indeed many of Christ’s parables are about acting prudentially: the five foolish virgins, the man who builds his house upon sand, the householder who needs to be on the watch against thieves.

Considering the Pope’s repeated endorsement of mass migration, one might think that his position accurately reflects the teaching of the Catholic Church, but, in fact, the Catechism of the Catholic Church takes a more prudential view. Here’s the second of its two paragraph on immigration:

Political authorities, for the sake of the common good for which they are responsible, may make the exercise of the right to immigrate subject to various juridical conditions, especially with regard to immigrants’ duties towards their country of adoption. Immigrants are obliged to respect with gratitude the material and spiritual heritage of the country that receives them, to obey its laws and to assist in carrying civic burdens (2241).

Since a good many Muslim migrants in Europe have little or no respect for the spiritual heritage of the countries that receive them, and little sense of duty toward them, it would seem that they do not meet the right-to-immigrate criterion set by the Catechism.

But prudence is not the pope’s strong suit. Indeed he is gaining a reputation for imprudence. He speaks off-the-cuff but not off-the-record to reporters on airliners. He continues to grant interviews to an elderly atheist journalist who doesn’t bother to take notes. He says things that seem to contradict settled Church teaching (such as the existence of hell). He has even said that the security of migrants is more important than national security.

All this is rather reckless, and it leads one to wonder if he has a similar casual attitude to the question of migration. Has Francis bothered to acquaint himself with the immigrant situation in Europe? Is he familiar with the statistics on crime, violence, and sexual assault? Does he know that, compared to other immigrant groups, Muslims have shown an unwillingness to assimilate? Does he understand why the people of Europe have the fears which he so casually dismisses as “xenophobia”?

Pope Francis’s injunction to fear not seems biblical at first glance, but it’s not entirely so. Christ tells us to fear not because despite persecutions and hardships he is always with us. He does not, however, enjoin us to invite the persecutors into our midst and then expect that he will save us from the consequences. Persecutions will come but Christ does not command us to facilitate the persecutions.

When he does send his disciples out into fearful situations, he makes sure that they understand the danger and take precautions against it: “Behold, I send you out as sheep in the midst of wolves, so be wise as serpents and innocent as doves” (Mt. 10: 16).

Christ understood that some men were as dangerous as wolves and he wanted his disciples to understand it as well. By contrast, Francis seems oblivious to the danger posed by the lone wolves that mix in with the Muslim migrants coming into Europe — this despite the fact that Islamic State leaders have repeatedly talked of their plans to seed Europe with thousands pf lone-wolf terrorists.

In addition to the lone-wolves, Europe is also filling up with “wolf-packs” — gangs of migrant youth who roam through the streets of towns and cities armed with knives and iron bars, terrorizing all in their path and, in some cases, forcing police to flee. Just last week, police in Duisburg, Germany clashed with a gang of 80 Muslim youths armed with machetes. Does the pope know about Duisburg? Does he know about the 1,400 rapes committed by Muslim gangs in Rotherham? The thousand victims of rape gangs in Telford? The 1,200 sexual assaults committed outside the Cathedral of Cologne on New Year’s Eve 2016?

If he does know — and there is a good chance that he doesn’t — it doesn’t seem to enter into his calculations. Pope Francis, it seems, doesn’t bother with prudential calculations. He has a preconceived narrative about Muslim migration, and anything that doesn’t fit into it is simply ignored.

If, indeed, allowing Islam’s pernicious ideology to flood into Europe is the proper Christian thing to do, then good Christians should follow Francis’s advice. But Francis has never made the case for mass Muslim immigration. He tells us that Christ wants it, but offers scant evidence that this is so. There is a much stronger case, backed by history, scripture, and common sense that Christian are called upon to resist the Islamic invasion of Europe.