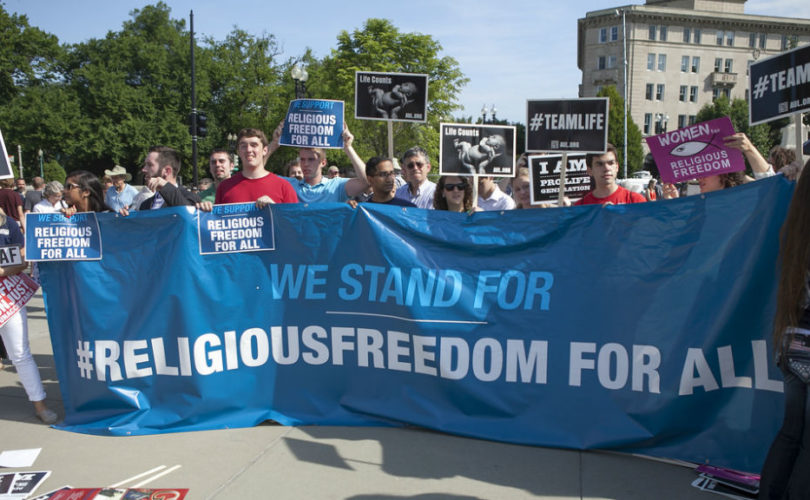 September 4, 2015 (CNSNews.com) — Before this summer, I couldn’t point out Rowan County on a map. I hadn’t even heard of the place.

Yet it is now the central battleground for religious freedom in America, where clerk Kim Davis is being threatened with contempt of court charges for standing for conscience and religious rights by not giving marriage licenses to gay couples. And she’s doing it practically by herself.

According to hordes of citizens, her own governor, multiple courts, the ACLU, and at least three presidential candidates, Davis should check her First Amendment rights at the door — as well as rights protected by the Kentucky Constitution and her state’s Religious Freedom Restoration Act.

That is appalling, but not surprising or new. Two thousand years ago, the apostles were ordered to stop preaching Christ, but like Davis they refused to obey man’s law over God’s, despite the threat of punishment.

What is new, however, is the shameful abandonment of Davis by so many Christians and conservatives. One of America’s bravest Christians is being thrown under the bus for simply following the example of Christ’s original followers.

Almost as disturbing are conservatives who are pressing Davis to capitulate — suggesting or demanding that Davis hand out homosexual ‘marriage’ licenses or resign. Such a position shows little appreciation for religious freedom and the rights of conscience.

According to her detractors, Davis is violating her state’s Constitution. However, according to that document, “No human authority shall, in any case whatever, control or interfere with the rights of conscience.”

Likewise, what part of not restricting the free exercise of religion are we not getting from the First Amendment?

And Kentucky’s Religious Freedom Restoration Act specifically says that “The right to act or refuse to act in a manner motivated by a sincerely held religious belief may not be substantially burdened unless the government proves by clear and convincing evidence that it has a compelling governmental interest in infringing the specific act or refusal to act and has used the least restrictive means to further that interest.”

What compelling reason can there be when gay activists targeting Davis can get a marriage license at any of the 129 other locations in the state?

Davis’ own statement shows that she is in the right. “I never imagined a day like this would come, where I would be asked to violate a central teaching of Scripture and of Jesus Himself regarding marriage,” she said. “To issue a marriage license which conflicts with God's definition of marriage, with my name affixed to the certificate, would violate my conscience. It is not a light issue for me. It is a Heaven or Hell decision.”

Unlike many of her detractors, Davis has responded to hate and death threads with true Christian love. “I have no animosity toward anyone and harbor no ill will,” she said in a statement this week. “To me this has never been a gay or lesbian issue. It is about marriage and God's Word.”

It has become the norm for LGBT activists to target those with whom they disagree. Death threats, unjust laws, and reduction in liberty and employment are becoming commonplace. But what is very new is this idea that supposed conservatives are not standing up to fight for religious freedom in America — to uphold the rights of Kim Davis, a courageous Democratic Christian woman who is standing as a symbol for all that is good and right in the amazing American tradition.

One of the few brave voices in this battle has been Providence, Rhode Island Bishop Thomas Tobin. In July, Tobin spoke in defense of a county clerk in Hood, Texas who made the same principled stand as Davis.

“Congratulations to Ms. Lang for her courageous stand!” said Tobin. “We need many more conscientious objectors – public officials, private businesses, advertisers, religious leaders, and family members – people of courage who will abide by their conscience, protect their religious rights, and not support or enable the furtherance of this moral aberration – so called, ‘same-sex marriage.’”

Yet neither Tobin’s words, nor Davis’, have stirred support among millions who should be her allies, including the six Catholics and the three Jews on the Supreme Court. If America’s alleged defenders of liberty are willing to abandon this woman, who’s next?

John-Henry Westen is the co-founder and editor-in-chief of LifeSiteNews.com. Reprinted with permission from CNSNews.com.