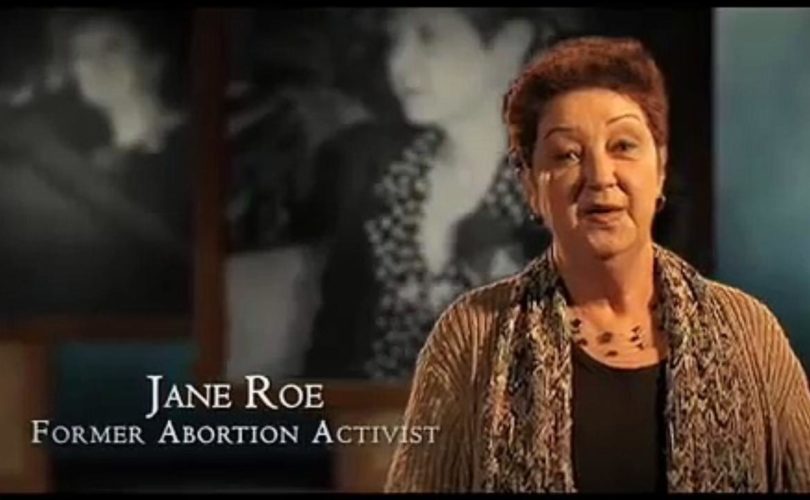 January 21, 2016 (NationalRighttoLifeNews) — There is a 46-year-old woman, born in Texas, who should be dead right now. In fact, she should have never been born. Forty-three years ago, the Supreme Court decided that the Texas law that prevented Jane Roe from ending the life of her unborn daughter was unconstitutional. But by the time the Supreme Court issued its decision in 1973, she had already been born and adopted by a family—likely not knowing that all that ink spilled in Roe v. Wade was about her.

Norma McCorvey is “Jane Roe.” She claimed then that her pregnancy was the result of a rape, although for over a decade now she has been outspokenly pro-life and publicly admitted that this, and virtually every fact on which her case was built, was a lie. Both McCorvey and Sandra Cano, the Doe of Doe v. Bolton—Roe’s companion case from Georgia decided the same day—[became] outspoken pro-life advocates who have sworn that their cases are built on lies (Cano unfortunately passed away in October 2014).

But before the Supreme Court could decide whether McCorvey did have a constitutional right to end her unborn daughter’s life, it had to overcome a procedural obstacle that slowed down the process—a delay that factored into whether her daughter would ever have a family.

Because of that delay, McCorvey had already had the child by the time the Supreme Court issued its decision in January 1973. She had been adopted into a Texas home, perhaps somewhere in the Dallas area where McCorvey lived. The court nevertheless said that McCorvey’s case was not moot since her circumstances were “capable of repetition” because courts would never be able to decide the question during the time of a woman’s pregnancy.

Procedural history is never the exciting part of a lawsuit. But for McCorvey’s unborn daughter, the dry complexity of legal procedure is the reason she exists today. Fortunately for a three-year old girl, “the wheels of justice grind slowly,” and by the time the court issued its decision, a Texas family had adopted her. If the courts could have moved more quickly, she (and her family) would have never had that chance.

It is unknown to me whether the adoptive family ever even knew that their daughter was the supposedly unwanted child who was the subject of Roe. As far as we know, they raised her not knowing who she was and certainly never telling her.

This week many are talking about the more than 58 million people whose lives have been brutally ended by abortion. And rightly so. The numbers are staggering. Imagine the average attendance at every NFL, NBA, and NHL game – gone. Eliminated. The population of the 18 states in the area from Arkansas and Wisconsin in the East to Idaho and Nevada in the west: gone. More than either the Hispanic or the African American population of the U.S.

It’s horrific. But it’s also personal. And today somewhere, maybe still in Texas, there lives a 46-year-old woman, perhaps with a family and a career of her own, with beautiful children that she loves dearly. Perhaps with a husband and family that can’t imagine life without her. The 58 million other babies deserved that same chance at life. Like McCorvey’s daughter, they were all created in the image of a loving God and would have been loved and wanted by someone. That’s why we fight. That’s #WhyWeMarch.