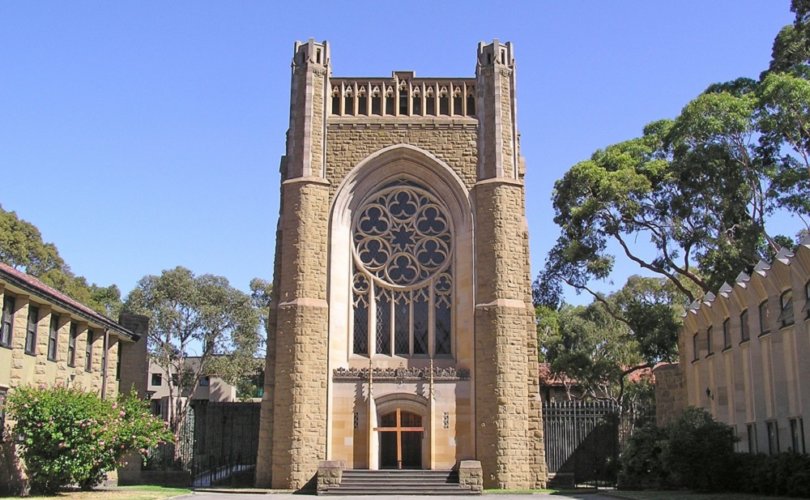 February 10, 2020 (Family Life International) — Melbourne’s prestigious Newman College is showing open support for LGBTI students, while actively discriminating against those who uphold the Church’s teaching on sexuality. Newman College is a residential campus for Catholic University of Melbourne students and was established more than a hundred years ago. The Jesuit-run college, which charges fees of around $25,000 per year, created a ‘Diversity Committee’ in 2019, complete with a ‘queer representative’ and the new Dean has been lauded by students for promoting the college as being ‘a safe space for Queer students.’

The dean’s efforts included holding a ‘diversity dinner’ during the second semester of 2019, featuring Newman’s first openly-gay president and LGBTIQ+ activist, William Kabira, as a speaker. Kabira’s speech, on the topics of diversity, ‘coming out’ and ‘queer’ representation at the college, was witnessed by at least two Priests, the Dean and other members of the Newman faculty. The event was publicised on social media and in the college student newsletter.

The University of Melbourne’s Newman College has taken steps towards greater inclusivity of its queer students, with efforts being made to improve their wellbeing and representation. The Dean of Newman, Genevieve Leach, has been a resident counsellor at the college for over a year, and oversaw the formation of a queer group for Newman students. She was also involved in updating the college’s student conduct policy.

The article includes details of a controversy in which a student who queried the college’s pro-queer stance was thrown out of a student Facebook group for ‘homophobic’ behaviour.

However, the article made no mention of the extreme discrimination perpetrated by members of the LGBTIQ+ lobby against conservative students.

By far the most egregious example of this discrimination is Newman’s treatment of Arts student, Riley Soares. Riley lived at Newman College from 2017–2019 while studying at Melbourne University.  He experiences same-sex attraction, but faithfully abides by the Church’s teaching in this matter. After publicly taking a traditional stance on marriage and sexuality that conflicted with the views of Newman College, Riley was denied residence at the college for the current study year, 2020 and his scholarships were not renewed.

Riley’s conflict with the Newman gay lobby goes back to 2017 when he took a stand for traditional marriage during the debate on the redefinition of marriage. For simply upholding the Church’s unchanging teaching on the nature of marriage, Riley was harassed and bullied by other students, subjected to accusations of homophobia and insults such as ‘faggot’ and ‘brainwashed Christian’ on social media.

Then in September 2018, Riley was the subject of discrimination by another student on the basis of being a Charismatic Catholic. He made complaints to the dean and was told it would be followed up if there was another incident. The insulting behaviour continued and Riley made a further complaint in writing, complete with screenshots. The dean instigated an informal investigation which resulted in an apology being given to Riley by the offending student orally, but no written apology. Riley accepted this fairly inadequate apology, but the mockery continued nevertheless until the offending student left the college.

In mid-2019, after the Farrago newspaper published its article on the ‘Diversity Committee’, Riley shared a video on his personal Facebook page about James Parker — a well-known Catholic activist who has rejected his former gay lifestyle. President William Kabira accused Riley of homophobia online and commented on the video saying that it was ‘ BS’. Kabira then falsely accused Riley of saying ‘gays are going to hell’ and also falsely accused him of supporting “gay conversion therapy” which he misunderstood as involving electro-shock therapy.

In response, Soares created an online petition against bullying experienced at Newman by those opposed to the ‘Diversity Committee’, as well as against the numerous Pride activities that were taking place at the college. The petition, while expressing respect for individuals choosing to identify as LGBTIQ+ and opposing discrimination against LBGTIQ+ individuals, pointed out that promoting that lifestyle was against Catholic teaching.

A member of the Newman Students Club retaliated by making their own petition and was encouraged by members of Newman’s General Council. The petition contained defamatory remarks about Riley that were so extreme that the company hosting the petition, Change.org, had the petition removed. Change later sent an email to Soares, apologising and stating that the petition had violated their community standards.

Things came to a head in November of 2019, when the college Provost, Sean Burke, held a meeting with Riley. At the meeting, he expressed the college’s decision to discontinue Riley’s scholarship and residency. The Provost noted that Riley had ‘been hurt and that he had hurt a fair few in this community’ and drew his attention to the conflict with the so-called ‘Diversity Committee’. Sean Burke allegedly told Riley that it was in his best interests not to return to the college and that he needed to become ‘more independent.’

When asked how he felt about his treatment at the hands of the ‘Diversity Committee’ and Newman faculty members, Riley Soares commented:

It’s been frustrating that Newman would put me in this position and blatantly refuse to address the members of Newman Students Club and General Council’s defamatory and bullying petition against me, which one could find for many months in the first 5 results when they googled my name. It affected me in a number of practical ways: for instance, at this point, I haven’t been able to find any secure housing for the year. Also when I’ve tried to apply for jobs, employers have done a google search on me and found the defamatory change.org petition against me as a concern and have denied me employment.

I feel very disappointed that a Catholic College would expel me for defending the Catholic ethos on the grounds of questioning whether it was appropriate that the College promotes the homosexual and queer lifestyle.

The College administration sees me as a threat because although I am a student who struggles with same-sex attraction, I refuse to bow down to the radical LGBTIQ+ agenda. I follow the Church’s teaching and the biblical stance on homosexuality and I will never compromise.

What is their message by kicking me out? It’s to set an example for other students. Don’t you even dare to question whether some of the actions and views of these people pushing these things are a little extreme, otherwise you’re going to be labelled a homophobe or transphobe, or gasp, even a bigot. Don’t you dare be courageous and speak out, otherwise we are going to take away your reputation, your standing among your peers- even perhaps your scholarship and right to residence at our very welcoming Catholic College. How diverse are we?

The Human Rights Law Alliance have been assisting Riley for apprehended unlawful discrimination and are yet to decide whether they will make a legal challenge. With the memory of Wilson Gavin so fresh in our minds, FLI prays for Riley’s situation and wishes him the best . For chaste, same-sex-attracted Catholics raise the ire not only of the secular world but most especially of liberal Catholics. Those who claim that Christ’s teaching on sexuality is an impossible goal have yet to learn the value in carrying their cross and denying themselves in order to find true freedom.