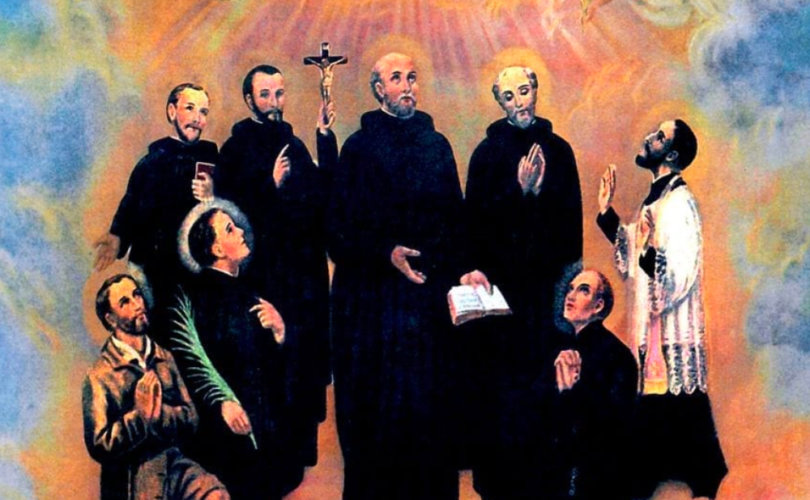 (LifeSiteNews) – In contrast to the insistence of some Christians today that certain pagan superstitions ought to be accepted in the name of inculturation — such as the “smudging” ceremony of “purification” practiced by native tribes in North America, in which the Pope will take part — the first indigenous converts to Christianity in Canada not only embraced the Catholic Faith wholeheartedly, abandoning all superstitions, but they esteemed the Jesuit missionaries so much that they entreated them to remain with their tribes when the missionaries were considering a return to safety in the French settlements.

According to the memoirs of the missionaries, titled Relationes, in northern Ontario in 1649, after the Iroquois had driven the Huron tribes from their own lands through incessant warfare, and following the brutal martyrdom of St. John de Brebeuf, leader of the Jesuit mission to the natives of New France, twelve Huron chiefs approached the blackrobes on the Island of St. Joseph to present them with gifts and beg them not to abandon them in their time of trial.

The missionaries give the details of that encounter.

[Vol.34, Ch.6, p.207] Most of the Huron villages which had become scattered have conceived the desire to reunite in the Island of St. Joseph; and twelve of the most considerable Captains have come to entreat us, in the name of all this poor desolate People, that we should have pity on their misery. They said that, without us, they saw themselves the prey of the enemy; that, with us, they esteemed themselves too strong not to defend themselves with courage; that we must have compassion on their widows, and on the poor Christian children; that those who remained Infidels were all resolved to embrace our Faith; and that we would make that Island an Island of Christians.

The chieftains presented the missionaries with their most valuable kind of gift, collars of porcelain, imploring them to remain at the mission for the sake of preserving the true Faith.

They declared emphatically that “they wished us [the missionaries] to know that the Faith would be more precious to them than were their goods; and that our instructions would be held dearer by them than all the riches which the earth could furnish them.”

The chieftains recalled the recent example of the martyrdom of St. John de Brebeuf, begging the blackrobes to “not refuse to die with them, since they wished to live as Christians.”

After having spoken more than three whole hours,—with an eloquence as powerful to bend us as the art of Orators could furnish, in the midst of France, to most of those who call these countries barbarous,—they made a display of ten large collars of porcelain (the pearls and diamonds of these countries); they told us that that was the voice of their women and children, who made us a present of the little which was left to them in their misery.

They added that we knew well enough in what esteem they held these necklaces, which are their ornaments and all their beauty; but that they wished us to know that the Faith would be more precious to them than were their goods; and that our instructions would be held dearer by them than all the riches which the earth could furnish them.

They said that they made these presents in order to revive in our persons the zeal and the name of Father Echon (the name which the Hurons have always given to Father Jean de Brebeuf); that he had been the first Apostle to the country; that he had died in order to assist them even to his last sigh; that they hoped that his example would touch us, and that our hearts could not refuse to die with them, since they wished to live as Christians.

The Jesuit Fathers were won over and changed their plans of retreating to safety. Instead, they remained with the natives on the Island of St. Joseph.

The Huron chieftains convinced the missionaries to face whatever perils might come on account of the hatred of the Faith that drove the Iroquois to brutally kill both priest and convert.

In a word, their eloquence—or, rather, the disposition of their souls, and the reasons which nature could supply to them—conquered us. We could not doubt that God had chosen to speak to us by their lips; and although, at their coming, we all had entertained another design, we all found ourselves changed before their departure, and with a common consent we believed that it was necessary to follow God in the direction whither he chose to call us,—whatever peril there might be in it for our lives, and in whatever depth of darkness we may continue,—for the remaining future, which is not in our power.

The zeal for the salvation of souls that drove those early Jesuit missionaries to face endless dangers and martyrdom is captured in several passages of the Relationes in which they manifest their interior dispositions and motives. Here are a few such passages:

Whatever may befall us, we carry with joy our souls in our hands, and our death will be our desire,—provided that our lives be spent only for the maintenance of the Faith and the glory of God in all these regions.

We know not what God reserves for us, and whether a stake and the flames will not perhaps be our portion, as well as that of our Brethren who have died here within so few days for the cause of God.

Whatever may befall us, we shall be too happy to have spent our lives in his service, since he deserves that all men sacrifice themselves for his glory; and that they have not a single moment of life except for his holy love, and for the salvation of the souls which he loved even until death.

The dispositions of those Jesuit missionaries and the amazing response of the Huron natives is instructive of the power of the Cross. The missionaries did not shy away from condemning the superstitions, errors, and wickedness of the pagan religion that the natives had previously practiced.

Nor did the Hurons lament the loss of their pagan practices upon converting to Christianity. They rejoiced in the gift of faith, and the salvation that comes through the grace of Christ alone.

Their testimony and the zeal of those early missionaries should reassure the Church today that the evangelization of indigenous peoples does not include the adoption of pagan superstitions, but rather the conversion of souls to the truth of Christ.