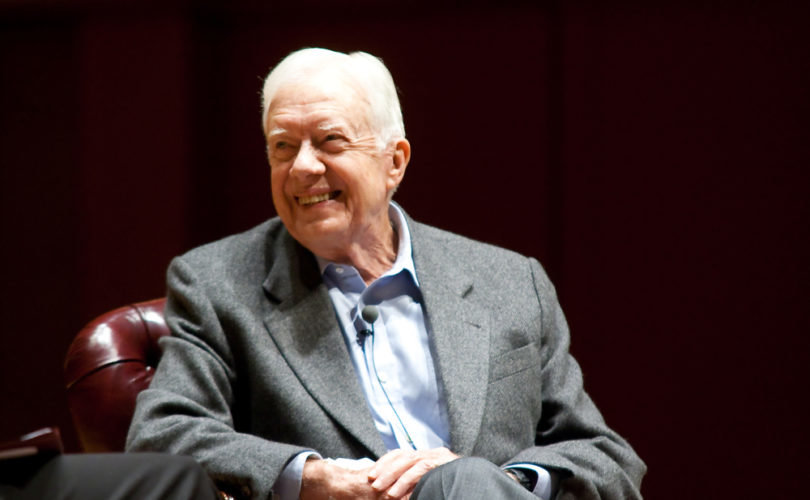 What's not to like about the “LGBTQ” movement in America?

Jimmy Carter talks like he spent the last two decades in New Zealand. Maybe he did, mentally. He is clueless and so, so wrong about homosexuality which, far from being a victimless sin, is the progenitor of virulent pathologies that are poisoning our culture.

The homosexuality/gender rebellion movement, behaviors and identities are toxic. If we didn't know this forty years ago when “gay rights” was in its infancy (and Carter was president), we certainly have ample evidence now.

Carter said in a recent interview, “I think Jesus would encourage any … love affair if it was honest and sincere and was not damaging to anyone else, and I don't see that gay marriage damages anyone else.”

What Jesus is Carter talking about? Not our beloved Savior whose life, teachings, death and resurrection are revealed in Scripture. The authentic Jesus was explicit that marriage involves one man and one woman (Matthew 19: 4-6 and Mark 10:5-9), and even that a man leaves “his father and mother” to join with a wife, not a “father and father.”

The true Christ is the Son eternally existent with the Father and Holy Spirit. He's the Good Shepherd, our Creator (John 1, Colossians 1) as well as the giver of law, the administrator of justice, and our merciful Savior.

Jesus was present in the Old Testament as Sodom and Gomorrah were destroyed (Genesis 19). And it was not because of issues over “hospitality” (a favorite spin of biblical contortionists).

Here are three reasons why every American Christian needs to speak loudly and vigorously to contend against the unhinged “LGBTQ” movement:

1. Homosexuality among adults, including “gay marriage,” leads pretty quickly to approval of sex in children – including pedophilia. When homosexuality is embraced even as “marriage” by the culture at large, it also becomes the new norm for adults to foist on children, grounded in a belief that some are born this way, despite the lack of evidence to support this revolutionary notion.

The result for kids is a mental and medical mess.

Welcoming homosexual and gender confused identities among children predictably results in more who experiment with anatomically high-risk sexual conduct. As revealed in two recent nationwide surveys by the Centers for Disease Control, homosexual practices and identities are rising among youth. Over 15% of American high schoolers now believe they are “gay, lesbian, bisexual or unsure.” And along with these de-stabilizing identities comes earlier and more experimental sexual conduct, more substance abuse and higher levels of other reckless behavior compared to heterosexually-identifying peers.

And so here come pedophilia activist groups clamoring to be added to the “LGBTQ” coalition as “P”. Why are we surprised? They want to be the latest “sexual minority” group, calling themselves “minor attracted persons (MAP)” and demanding rights because they claim (falsely) they were born that way.

If children can be sexual with each other at younger and younger ages, why not with adults? Why not lower the age of consent, a fond dream of “gay rights” activism for forty years? And with pregnancy not an issue, perhaps Jimmy Carter thinks there's “no harm.” This is the argument and it's not just coming – it's here.

Yet early sexualization of children is highly correlated with diminished well-being and even lifetime pathologies.

America has permitted the efforts of generously-funded adult groups with depraved agendas, like GLSEN and HRC, who specifically target kids, bypassing parents, to promote “support” and “safety” for homosexual and cross-gender expression. Their messages vilify people of faith and all previous moral norms. Impressionable kids are saying yes and being lured into sexual minority hell – literally.

Some good news is that the GOP is taking action and demanding parental rights in sexuality education. Hopefully, this will bring accountability to local schools. But it will only be effective if parents themselves stand up to protect their children.

2. The “LGBTQ” agenda is hatred, not “inclusion.”Ask people like Jack Phillips from Lakewood, CO or the Klein family in Gresham, OR the Benham brothers in North Carolina, or Barronelle Stutzman in Washington state, if they believe homosexual rights are all about “tolerance.” Phillips prevailed at the U.S. Supreme Court in Masterpiece Cakeshop v. Colorado Civil Rights Commission, but would he go through this again? Did this protracted and unneeded lawsuit have to happen?

No. It should have been an easy conversation in the bakery where reasonable people agreed to disagree and respect each other's beliefs. But too many homosexuals are proving over and over they are either uncontrollably spiteful or easily manipulated by those who are. Any opposition must be squashed and the dissenters must be made to pay.

Right now, the punishment is loss of employment, customers, and business viability.

How soon before it devolves into pointless bloodshed?

The victims of targeted, deliberate hate campaigns and lawsuits are being publicly shamed and professionally punished, even though they uphold man/woman marriage as affirmed by Christ in Matthew 19 and throughout Scripture. They are modern-day heroes, but if you listen to “gay” media or visit Democratic Party sites, these folks are evil “haters.”

How can Carter say there is no harm here? Is he a liar like the activists he defends, or is he just embarrassingly ignorant for a former Commander-in-Chief?

3. Church congregations are splintering over distortions and deceptions about homosexual attractions and gender confusion. There is no support in Scripture for males having sexual relations with other males, or for pairs of females in such liaisons. There is no support for gender “change.” Instead, the Bible teaches about God's design of humans as male and female and the beauty of sexuality reserved for God-ordained male/female marriage.

Support for homosexuality within Christian circles is a total fraud. These lies only proliferate in a climate where many self-labeled believers have little depth in Scripture and are thus easily deceived.

Or they are willing to trade the truth of God for the satisfaction of the flesh.

But God is not mocked and those who go with the culture on this (swayed by friends, family members, corrupt ministers and celebrities) will have to answer to Him for the damage they enabled, and the children who were sexually corrupted because adults offered “support” for perversion and no warnings. They will have to explain the neglect of those who never come to a saving faith in the true Jesus because they hear only about a false Christ who is an idol of personal, fleshly sin, not the eternal God of unchanging truth.

Because no help is coming from the likes of leaders like Jimmy Carter.

Published with permission from Mission America.