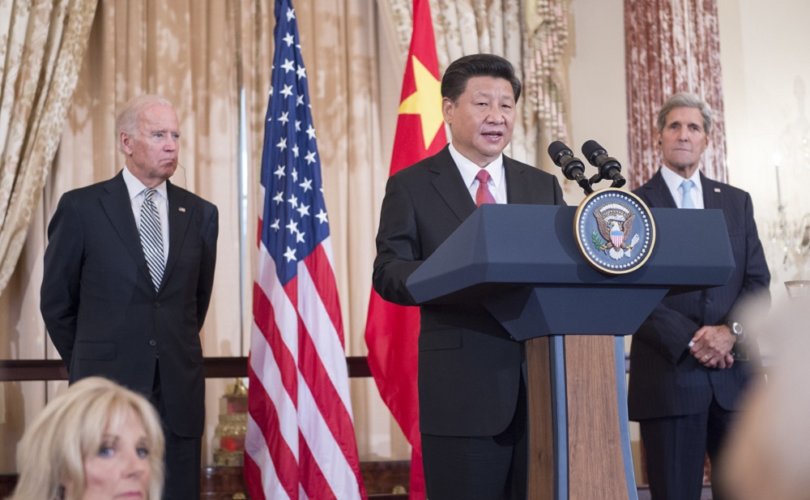 March 18, 2020 (American Thinker) — Desperation has set in among the Politburo in China as their deliberate mishandling and obfuscation of the Chinese Coronavirus outbreak has threatened, and in all likelihood derailed, their grandiose plans for global hegemony. In what can be described only as one of the most ham-handed propaganda efforts in recent memory, China is now trying to deflect blame onto the United States for the coronavirus outbreak that has been recently categorized as a global pandemic. Further, the Chinese are unabashedly claiming that any criticism of their “valiant” efforts to stem the spread of the virus or using the nomenclature of “Wuhan Virus” or “Chinese Coronavirus” is racist and xenophobic.

While their attempt to implicate the United States may appear absurd on the surface, the reality is that much of it will fall on fertile ground previously tilled and seeded over the past 25 years with vast amounts of money and investments.

An end product of China’s infiltration of the American media and education establishment is the almost immediate regurgitation of China’s “racist and xenophobic” argument by the American mainstream media and the predominantly left-wing professional class. Hollywood and the entertainment cabal, already awash in Chinese capital and desperate for access to the Chinese market, have refused to criticize China’s handling of the coronavirus, focusing instead on President Trump. It is almost a certainty that when the pandemic recedes, there will be nothing produced that is even remotely critical of China.

The European Union is now China’s largest trading partner and investor. China is beginning to exert increasing influence in nations such as Italy and throughout the continent. This is why the European Union refused to initiate a travel ban from China during the entirety of the coronavirus outbreak, leading to Europe now being the global epicenter of the pandemic as well as the source of the bulk of the infections in the United States.

With this overall backdrop, the Chinese leadership are confident that their near clownish propaganda efforts will succeed. Their only obstacle is the re-election of President Trump, who is the only world leader in the past 25 years to understand what animates the Chinese and to stand up to their intimidation tactics.

The establishment of the Democrat Party believe they have a solution to that obstacle in what appears to be the inevitable nomination of Joe Biden.

Joe Biden, in his days in the Senate, was very partial to China, as he voted against all legislation aimed at curtailing China’s ambitions. In 2007, he opposed the idea of applying any tariffs on China despite the nation’s obvious unfair trade practices and theft of proprietary technology that was causing the loss of millions of American manufacturing jobs. America’s dependence on a communist regime for materials and goods, such as pharmaceuticals, continued to grow unabated. However, it was as vice president that Biden became wholly enamored of the country and its leadership.

For example, while in China, Biden, in August of 2011, approved of and defended China’s grotesque one-child policy, which brutally used forced abortions to implement the law. (In that same year, Biden was given the assignment, by Barack Obama, to be the point man on China due his close personal relationship with Xi Jinping, currently president and general secretary of the Chinese Communist Party.

Joe Biden never missed an opportunity to downplay China’s threat to the United States. In May of 2013, in a commencement speech, he assured those concerned that the Chinese are “going to eat our lunch” that they had nothing to be concerned about, as China had immense problems and an inability to think differently. In May of 2014 Biden, described China as a nation incapable of producing innovative products and ideas. Two weeks after declaring his 2020 candidacy, Biden, in Iowa, said:

China is going to eat our lunch? Come on, man…they can’t even figure out how to deal with the corruption that exists within the system. I mean, you know, they’re not bad folks, folks. But guess what, they’re not competition for us.

In December 2013, Biden flew to Beijing on Air Force Two with his son Hunter on an official trip, ostensibly to discuss tensions over disputed territories in the East China Sea. Joe and Hunter were ushered into a red-carpet meeting with a delegation of various Chinese officials. Hunter remained with the delegation while his father met with President Xi Jinping. During these meetings, Joe Biden struck an extremely conciliatory and friendly tone with the Chinese leadership — much to the dismay of America’s allies in the region.

Ten day later, Hunter’s two-year-old company, Rosemont Seneca, signed an exclusive $1-billion (later expanded to $1.5-billion) deal with the state-owned Bank of China, creating an investment fund called Bohai Harvest, with money guaranteed by the Chinese government. As Peter Schweizer, who was the first to unveil these conflicts of interest, wrote in his book Secret Empires, “the Chinese Government was literally funding a business that it co-owned along with the son of one of America’s most powerful decision makers.” That is what it looks like to be “compromised by a foreign power.”

Anyone who has dealt with the Chinese government or an entity controlled by the government can attest that any foreign business transaction with China always has a requisite or implied quid pro quo that oftentimes does not involve monetary considerations. Once entangled in this web, it is nearly impossible to escape — as many businesses and nations, throughout Africa and Europe, much to their chagrin, have experienced. It would be naïve to believe that Joe Biden is not embroiled in this labyrinth of expectations and demands.

Nonetheless, Joe Biden is perhaps the ideal candidate for a party whose propaganda arms, the mainstream media and Hollywood, openly shill for the Chinese communist leadership and whose primary financial backers, high-tech and Wall Street billionaires such as Michael Bloomberg, have major financial and manufacturing ties to China and whose most dedicated foot soldiers are true believers in authoritarian socialism — and whose common enemy is Donald Trump and his America First populist movement.

To further amplify that the Democrat Party is a surrogate of the Chinese leadership and is abiding by the maxim that the enemy of my enemy is my friend, criticism of China’s handling of the coronavirus epidemic by anyone in Democrat party leadership, or their donor and left-leaning professional class, has been virtually nonexistent. On the other hand, the unceasing and often fabricated disparagement of President Trump is part of a calculated strategy to frame the coronavirus epidemic in a way that leads to his defeat in November. Even China’s not so veiled threat to withhold shipping vital drugs to the United States in retaliation for any criticism of their handling of the coronavirus outbreak was met with a deafening silence.

China is an existential threat to the United States. Joe Biden and the Democrat Party would abet the Chinese in their quest for global hegemony and in essence surrender American sovereignty. But first these collaborators must get rid of Donald Trump. Thus, any unseemly tactics, outrageous fabrications, and personal smears will be directed at him and his voters over the next seven and a half months to achieve that goal.

This article originally appeared at the American Thinker. It is published with the author's permission.