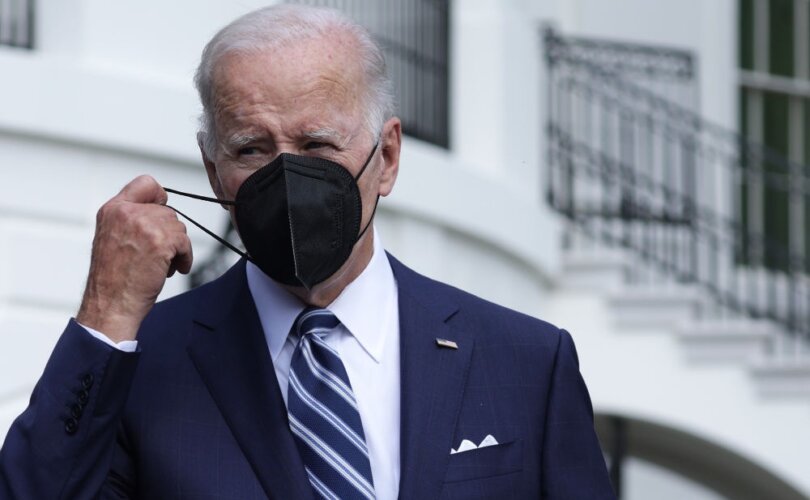 U.S. President Joe Biden takes off his mask as he walks towards members of the press prior to a Marine One departure from the White House to Maryland August 26, 2022 in Washington, DC. Photo by Alex Wong/Getty Images

(LifeSiteNews) — With the discovery of a second set of classified documents in Joe Biden’s garage, the controversy around his tenure as vice president continues to grow.

Biden has been further implicated in the Twitter files, which show his administration being “very angry” that the social media giant did not do more to discredit and suppress the concerns of prominent scientists and medical experts which undermined the official COVID narrative.

Speculation is rife concerning the means by which these documents have been discovered. Supporters of the Biden regime suggest they have been planted, an allegation which has been repeated on national television.

READ: War in Ukraine caused an economic earthquake that is rippling across the West

Biden has not denied the presence of the documents, nor that they were sensitive. Rather than explain the matter, when questioned about papers taken whilst he was vice president under then-President Barack Obama, he rejoined, “By the way, my Corvette’s in a locked garage, okay? So it’s not like they’re sitting out in the street.”

Why are these papers now significant — and why are they being revealed by Biden’s own aides, or even his own lawyers? The answer may lie in events which link Biden’s actions in his time as vice president to the present day.

What did Biden do in the last weeks of his vice presidency? Obama’s final day in office was January 20, 2017. One month prior to this, on December 6, 7 and 8, Biden visited Kiev, Ukraine on a three day trip. He met with then-President Petro Poroshenko, and Prime Minister Arseniy Yatsenyuk, who was infamously appointed in a 2014 phone call by former Asst. Secretary of State Victoria Nuland.

In a piece by CNN, these final visits are framed as part of a ‘chaotic’ leave-taking by the Obama and Biden teams, which included the award of the Presidential Medal of Freedom from Obama to Biden on January 13th. Later that day, Biden flew to Ukraine for the second time in five weeks. The report stresses Biden’s long term interest in Ukrainian affairs, relating his remarks to Ukrainian President Poroshenko:

I want to say what a privilege it has been to support and stand with Ukraine over these past 25 years, first as a senator and of late as vice president.

What business could Biden have that was so urgent to be conducted in person in Ukraine is only one part of the story. With only days to go in office, he returns to speak personally with the Ukrainian leader. It is to be remembered that at this point Biden had no ambitions to return to politics. As CNN said:

At the time, the notion of Biden running for president in 2020 wasn’t even a private consideration as he prepared to set off into the private sector for the first time of his adult life.

Perhaps his visits to Ukraine were more germane to these private sector interests than a matter of marking 25 years of U.S.-Ukraine relations. It is noteworthy that the documents discovered in Biden’s garage are said to pertain to “US intelligence memorandums and briefing materials that covered topics including Ukraine, Iran and the United Kingdom.”

If this is the case, then the second half of the story is to ask “Why now?” It is hardly credible that Biden’s own aides have accidentally uncovered scandalous evidence behind the president’s Corvette. This is more likely a move taken for reasons of political expediency. This process may suggest the power of a permanent bureaucracy to decide matters of national interest, even at the expense of the president.

The isolation of Donald Trump in office saw his orders on matters, such as the withdrawal from Syria, basically ignored. Aside from partisan politicking, the treatment meted out to Trump suggests that true power in the U.S. government lies outside and around the White House in a structure which survives elections to pursue its own agenda.

That agenda is largely based on war. Tellingly, the campaign in the current war in Ukraine is not going well. Russia is not going to collapse. The sanctions are harming Europe, not Vladimr Putin. Recent changes in the battleground make a Ukrainian — and U.S. — victory ever more unlikely. In a recent piece on the conflict, former Secretary of State Condoleeza Rice warned that time is running out for Ukraine. She called for a massive increase in the supply of tanks, armor and ammunition. This begs the question — where have all the Ukrainian tanks and armor gone?

One subject the Twitter Files have yet to touch upon is the propaganda war over Ukraine. From Hunter Biden’s laptop to the case of the vanishing Ukrainian army — and territory — the media generally have been careful to manage any evidence out of sight which is damaging to the narrative. With events on the ground proving unpromising, and with further revelations of media manipulation likely, it may be Ukraine which provides the answer as to why these papers have suddenly appeared in the news. Biden’s career may be about to end in the ignominy of scandal and defeat.