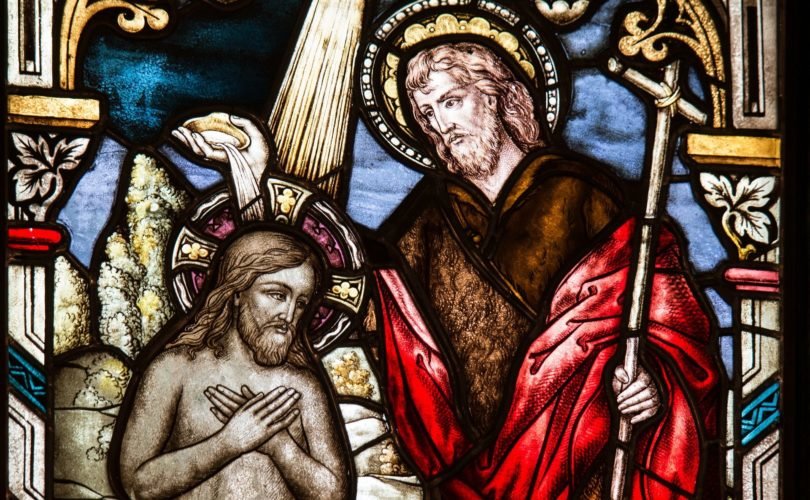 John the Baptist baptizing the LordPixabay

(LifeSiteNews) — John the Baptist is one of those biblical figures about whom people are often unclear.

He shows up in the Gospels as “the voice of one crying out in the wilderness,” who proclaims Christ’s arrival — his advent. But John’s status is sort of nebulous throughout, and he exits the story as abruptly as he enters it.

We should recognize John for what he really was: a champion of truth.

A popular preacher (today we’d call him a revivalist), he emphasized to those following his movement that he, himself, was not the Messiah. And of course, we know that it was his truth-telling that brought him to a violent end, executed by Herod Antipas, tetrarch of Galilee.

John broke no laws. Rather, he very publicly criticized Herod, who had seduced Herodias, wife of Herod’s own brother, Philip, and taken her away from her husband.

That was the truth John proclaimed. And he paid for it with his head.

The commitment of John to truth is underscored by a fact that’s often ignored. John was the son of a temple priest, Zachariah, and so should have been a priest himself. But he rejected the leadership class, choosing instead to serve as herald of his kinsman, Jesus.

If ever there was a time that called out for John’s intercession, it’s today, an age that seems devoted to obscuring truth and promoting confusion. The indications are everywhere.

I recently read an article about law school admissions that described how one New York law school asks its applicants to specify their gender and sexual orientation, choosing from among 13 different designations. Mind you, this is an institution that trains attorneys, a profession supposedly dedicated to identifying truth and clarifying facts.

In the spirit of “wokeness” prevalent in higher education right now, the school has apparently abandoned reason, moving beyond the simple, observable reality that God made human beings either male or female.

This way of thinking is increasingly common in the academic world.

Recent news about a University of Pennsylvania athlete illustrates this.

A male swimmer who had decided he’s really a girl insisted he be allowed onto the women’s swim team. I don’t know how he might have ranked among male swimmers, but he wrapped up the titles for women’s aquatics.

The spirit of “wokeness” considers this fair, but it’s really cheating. It’s profoundly unjust to all those dedicated female athletes who trained hard, practicing for years to compete in their sport, assuming (quite naturally) that they would be matched against other girls.

The pattern is being repeated all over the country. People are ignoring reality, making up their personal identity as they go along. This is egotism run wild. Not only does it contradict reason, but it’s a huge lie. It violates God’s law.

Virtually all academic subjects have been infected with the spirit of “wokeness.”

By now everybody has heard of how Critical Race Theory is being applied to history, literary analysis, and the rest of the humanities. But even scholarly fields thought of as fact-based are yielding to ideological interpretation.

Believe it or not, there’s such a thing as “woke” mathematics. The idea is that schools ought not to insist that everybody achieve the same result when working through a mathematical calculation.

After all, some academics maintain, the lived experience of various ethnic groups is unique, and therefore each has a different way of relating to the tangible world. Each has its own “reality,” in other words — its own “story,” its own “narrative,” its own “truth.”

Consequently, it can’t be said that 5 plus 5 will always equal 10. It might be 8 or something else, depending upon how reality is perceived. Therefore, it would be wrong to force everyone to conform to one standard numerical result.

I’m not sure how this theory translates into engineering the structure of a building or computing the trajectory of a flight to the moon. But recalling my own experience in math class, I’ll admit that I can appreciate the idea. I would have avoided considerable time in summer school if my teachers had accepted this as an explanation for my own mathematical deficiencies.

In any event, the theory has gained wide support in certain circles of pedagogical opinion.

Such “woke” nonsense would be laughable, except that it’s harmful. In particular, it’s harmful to young people, whose minds are no longer being trained to reason, to assemble and analyze facts, and to arrive at logical conclusions — to live their lives competently.

Truth is essential. And like John the Baptist, we must each decide for ourselves what we’re willing to risk in speaking it, insisting upon it, defending it. The future of our society depends on how we choose.

John the Baptist, pray for us.

This essay is based on a homily delivered by Fr. Orsi.  A priest of the Diocese of Camden, New Jersey, Rev. Michael P. Orsi currently serves as parochial vicar at St. Agnes Parish in Naples, Florida. He is host of “Action for Life TV,” a weekly cable television series devoted to pro-life issues, and his writings appear in numerous publications and online journals. His TV show episodes can be viewed online here.