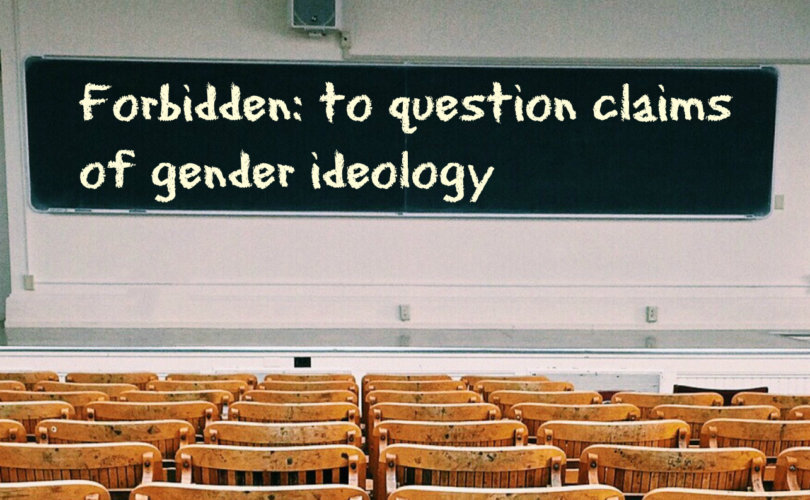 November 4, 2016 (CultureWitness) — For anyone who has doubts about the totalitarian tendencies of the radical left, and in particular the creeping dictatorship of gender-rights ideology, this program is a must-see. On Oct. 26th, Dr. Jordan Peterson appeared on The Agenda with Steve Paikin, and defended himself valiantly against three gender-rights activists. He was asserting his right to stick to the English language rather than adopting the various newly-minted personal pronouns, like xe, thon, zer and a singluar 'they', to refer to those who identify with a multitude of alternative gender identities. At the present time, Bill C-16 threatens to make it a violation of human rights for anyone to refuse to use these pronouns. The Agenda debate paints a very disturbing portrait of the intolerant and anti-truth society that is descending upon us.

Dr. Peterson was unwavering in defence of the truth and showed not the slightest signs of being intimidated by the left-wing barrage against him. Nonetheless, the following exchange shows just how serious the situation has gotten in our formerly free Western paradise:

Paikin: Are you prepared to suffer the consequences that society may deem you need to suffer because of your views?
Peterson: Yes, I'm prepared to do that….I think that the Ontario Human Rights Tribunal is probably obligated by their own tangled web to bring me in front of it. If they fine me, I won't pay it. If they put me in jail, I'll go on a hunger strike. I'm not doing this, and that's that. I'm not using the words that other people require me to use, especially if they're made up by radical left-wing ideologues.

Dr. Peterson might be headed to jail for refusing to use “zer” and “thon” but fancy lawyer Kyle Kirkup of the University of Ottawa, a specialist in LGBTQ Human Rights, still tried to play down Bill C-16 as an insignificant tweak to existing laws, saying that the whole brouhaha over pronouns is just a tempest in a teapot. But Paikin didn't let the matter drop, and managed to corner Kirkup into an admission:

Paikin: If a trans person, or somebody whose gender identity was more, shall we say, complicated than the male-female that we've been talking about so far, and the pronoun used to describe that person were not traditional, would the person have a case before the Human Rights Commission?
Kirkup: I would say absolutely, as a general rule that you should be thinking about in terms of employment settings, absolutely, respecting a trans person's pronoun choice is really fundamental.

And voila. The totalitarian tendencies rear their hidden aspirations. Suddenly, it's “fundamental” and an apparent no-brainer that anyone who refuses to bow to the ideologically-driven linguistics of the left can be hauled before the Human Rights Commission. Well then, clearly Bill C-16 is not so harmless after all.

But there's more. Among other things, it became clear that the gender-rights activists consider it hate speech and even outright violence if anyone so much as dares to question the biological premises of gender expression and gender identity. This became very clear when Nicholas Matte, Ph.D. Candidate in the Sexual Diversity Studies program at the University of Toronto, accused Dr. Peterson of “abusing” students by refusing to use their preferred gender pronoun:

Matte:…I don't agree with why Dr. Peterson has been asked to stop abusing students on campus…
Peterson: To stop doing what?
Matte: Abusing students and other members of our learning community who do deserve respect and do deserve to be able to work and learn and contribute to society in a place where if they are physically assaulted….
Paikin (to Matte): You've accused him of abusing students by not using the pronouns that they want to be addressed by?
Matte: That is how I see it, absolutely.
Paikin: That is tantamount to abuse, in your view?
Matte: Absolutely. Many, many global documents, many organisations…
Peterson: How about violence, is it tantamount to violence?
Matte: Yes, absolutely.
Peterson: How about hate speech, is it tantamount to hate speech?
Matte: Yes, of course it's hate speech to tell someone that you won't refer to them in a way that recognizes their humanity and dignity.

There we have it. Get ready for this, because it is about to become law: anyone who refuses to verbally affirm the claims of gender-rights ideology will be accused of hate speech and even violence.

I found it rather amusing that as soon as his claim of abuse was doubted by Paikin, Matte immediately ran behind the skirts of huge piles of 'global' documents. I guess if the pile of papers gets big enough then what they say must be true, even if all the papers were produced by like-minded left-wing ideologues.

This doesn't make sense in any logical way, and it doesn't really have to. If Matte demonstrated anything on this program, it was his exquisite ability to talk at length in loose and convoluted circles without actually making logical arguments. Here's what I mean:

Paikin: Why do you think the trans community needs this kind of legislative [hate speech] protection?
Matte: People are actually suffering huge lack of access to resources that will allow people to survive. So people are being physically assaulted, people do not have counsellors that they can go to who are not going to, as Dr. Peterson has done on YouTube, recommend that they actually become more anxious and more upset about situations, people are being assaulted, I brought all sorts of really depressing stats that people who are leaning towards thinking that this is not that big of a deal, those people need to look at those stats.
Paikin: Give us one stat.
Matte: 58% of students could not get academic transcripts with their correct name or pronoun. That causes a huge chain of events for students or anybody who's had any kind of academic training. As everyone recognises, we need to be able to have references, we need to be able to have resumes, we need to be able to get jobs….The feeling of disrespect is not as important as the ways that people in authority are able to circumvent the possibilities for living, so it has more to do with not being able to find housing and therefore being homeless, it has more to do with not being able to get jobs because people are discriminated against….what we should be talking about are the social issues facing people who are being discriminated against, and what that looks like on campus, which is that some professors refuse to offer basic dignity to students and colleagues, and that leads to people missing classes, it leads to people dropping out, it leads to a lack of positive opportunity for society to actually benefit from the contributions of many, many people.

O-kay, so Dr. Peterson and anyone else who refuses to use “zim” and “hir” is causing homelessness, physical assault, drop outs and unemployment among the trans community. Gotcha.

But Matte has one big thing going for him: he can afford to be incoherent. He nestles secure in the knowledge that his side of this epic tug-of-war has already won, at least for the time being. Free speech has already lost, and gender ideology has already won. I don't want to sound defeatist, but this is not a matter of personal opinion. Whether or not we accept it, the legal hammer of Bill C-16 is already descending down to clobber the common man who dares to point out that the emperor has no clothes.

In fact, Matte was still being far too tolerant and forgiving towards Dr. Peterson, at least in the view of some other gender-rights warriors. One such activist actually refused to appear on The Agenda because he or she objected to giving Dr. Peterson any opportunity to be heard at all, saying:

Giving (Jordan) Peterson this platform serves to legitimize his views which are based in bigotry and misinformation. The humanity and rights of transgender, non-binary and intersex people are not a matter of debate, and holding a debate which places a false equivalency between the views expressed by Peterson and the human rights concerns of the trans community would be an act of transphobia.

Let me repeat a portion of that:

The humanity and rights of transgender, non-binary and intersex people are not a matter of debate.

Clearly what this speaker would like is an outright ban on any questioning of the claims made by gender-rights ideology. And Kirkup, a prominent legal eagle with a very fancy resume, also seemed to support the view that Peterson should not have been allowed on The Agenda:

Paikin: Kyle, are we being transphobic here by having this debate?
Kirkup: I do worry about setting up a false equivalency in this conversation, and really even making the premise that trans lives are up for debate. They're not up for debate. Human rights aren't up for debate…

And that, right there, is the totalitarian mindset. The term “human rights” has become a blanket that envelops the entire gender ideology in a protective bubble wrap, making it completely immune to any criticism or questioning.

This view will triumph in our society in the next few years, as Dr. Peterson predicts:

Peterson: Many people are claiming that the expression of these views should no longer be permitted. …I believe quite firmly that if we continue on our present path at the universities for five more years, that's a discussion we will not actually be able to have on campuses, by fiat.”

Dr. Peterson is right about that.

So why is this happening? Why are the gender-rights warriors pushing so strongly against free speech? A surprisingly perceptive answer came from a member of the trans community, a man who transitioned into a woman named Theryn Meyer.

Paikin: I wonder if you could give us your explanation for why some people adamantly refuse even to have this discussion, that the notion of having this discussion is somehow transphobic.
Theryn: I think it has to do with there's a lacking when it comes to actually being able to defend your points through argument. So if you open up the discussion for argument, they know they will lose.

It's the oldest trick in the book: when you run out of arguments, use your fists – or in this case, Bill C-16 – to crush your opponents.

Reprinted with permission from Culture Witness.