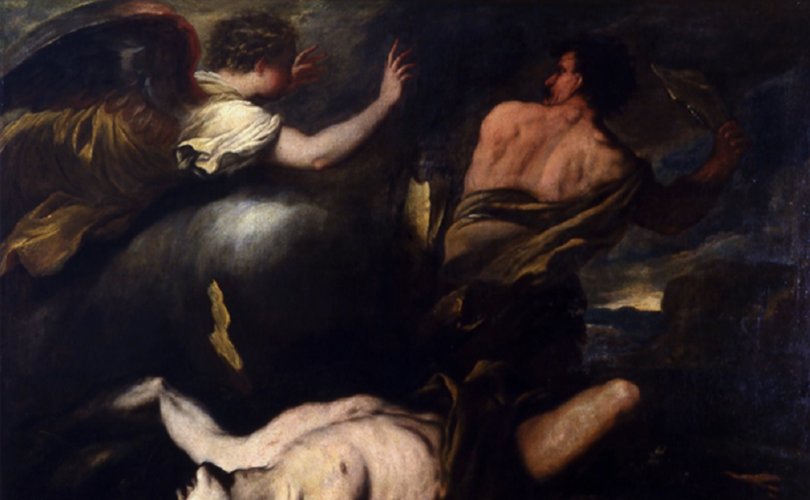 June 29, 2018 (The Public Discourse) – In his “Biblical Series V: The Hostile Brothers” and in his international best seller 12 Rules for Life: An Antidote to Chaos, Jordan Peterson provides a rich interpretation of the story of Cain and Abel. The archetypal brothers both suffer, but their radically different responses to their suffering represent perennial human options.

After becoming self-conscious and leaving the Garden of Eden, “Adam knew Eve his wife, and she conceived and bore Cain, saying, 'I have gotten a man with the help of the Lord'” (Genesis 4:1). Cain is not just the first-born son, Peterson notes, but the first-born human being.

“And again, she bore his brother Abel” (Gen 4:2). In his book The Beginning of Wisdom, Leon Kass points out that Genesis records no joyous remarks, no gratitude to God, and no maternal pride accompanying Abel's birth. Like most parents, Eve favors her first-born.

Adam does too. “Now Abel was a keeper of sheep, and Cain a tiller of the ground” (Genesis 4:2). Adam cultivates the garden and invites Cain to join him in the established family business. In ancient cultures, Peterson notes, the first-born son inherited the land tilled by his father, while the other sons had to fend for themselves. This practice had a strong rationale behind it: dividing the land equally among many sons would lead to increasingly small parcels of cultivated land available for farming over the generations, thereby increasing the likelihood of starvation for everyone.

So, with no mentor to guide him, Abel has to make his way as a shepherd. The sheep like to wander where they will, and this draws him into potential conflict with Cain. Peterson points out, “The herdsmen like to have their herds, sheep, cattle, go wherever they were going to go. The agriculturalists – the farmers – have things fenced off.” The land provides Abel with less social support, more risk of violent death from wild animals, and greater exposure to the elements. So not just their rival social status in the family but also their occupations set Cain against Abel, with Abel getting the lesser part.

How could Abel not notice Eve's favoritism, Adam's mentorship of his brother, and Cain's social status as first-born? Abel is cast outside the home, relegated to keeping company with sheep. If a lion attacks him, who will hear his cry?

Yet Abel's suffering drives him to self-development rather than despair, Peterson suggests. “He is ignorant and humble, and because of this, he can learn.”

Peterson's interpretation remains relatively silent about exactly what Abel learns and why he flourishes. Malcolm Gladwell's David and Goliath provides a possible answer. Armed with a sling and rocks, a good shepherd is a “slinger” who defends his sheep from lions and bears (1 Sam 17:36). “Imagine standing in front of a Major League Baseball pitcher as he aims a baseball at your head,” writes Gladwell. “That's what facing a slinger was like – only what was being thrown was not a ball of cork and leather, but a solid rock.” Abel learned to defend the sheep and defend himself. If you've killed lions and bears, your older brother is not so intimidating. Rather than playing the victim, Abel becomes a warrior.

In his safe space tilling the land near home, Cain does not develop self-reliance or skill in violent means of protection. “Abel is, by all appearances, dancing his way through life,” writes Peterson. “Worse of all, he's genuinely a good person. Everyone knows it. He deserves his good fortune. All the more reason to envy and hate him.” Cain's envy intensifies.

“In the course of time, Cain brought to the Lord an offering of the fruit of the ground, and Abel brought of the firstlings of his flock and of their fat portions” (Genesis 4:4). Some modern readers might dismiss the idea of sacrifice as a superstitious practice of primitive savages, but Peterson offers a radically different interpretation. Our own suffering is undeniable, so what can we do about it? “If you want to make things better in the future,” writes Peterson, “then you make sacrifices in the present.” Human beings project their existence into the future, and so can work now to make their futures better. “It's our knowledge of the possibility of tragedy and suffering in the future that motivates us to sacrifice in the present, so that we can reduce the unnecessary anxiety, uncertainty, and pain that awaits us.” Far from exhibiting primitive superstition, “the sacrifices that people were making to God were the dramatic precursors to the psychological idea of sacrifice that we all hold as civilized people in the modern world.”

To sacrifice is human, and to sacrifice for the sake of the greater good is to act with human wisdom. “Modern people have by no means stopped making sacrifices to God, regardless of what they think,” writes Peterson. “Our very belief that hard work and discipline will bring success is a precise but abstracted and refined restatement of the idea that God will shower his grace on the individual who makes the right offering.”

“And the Lord had regard for Abel and his offering, but for Cain and his offering he had no regard” (Genesis 4:5). Like Augustine in the City of God, Peterson notes that it is unspecified why God prefers Abel's sacrifice. This nondisclosure in the story universalizes the message. We often do not know the reason why our sacrifices fail. We can set ort minds to achieve some end, strive mightily in employing all available means at great cost, and come out with nothing but ashes.

“So Cain was very angry, and his countenance fell” (Genesis 4:5). Peterson comments, “He becomes jealous and bitter – and it's no wonder. If someone fails and is rejected because he refused to make any sacrifices at all – well, that's at least understandable. He may still feel resentful and vengeful, but he knows in his heart that he is personally to blame. That knowledge generally places a limit on his outrage. It's much worse, however, if he had actually forgone the pleasures of the moment – if he had strived and toiled and things still didn't work out – if he was rejected despite his efforts. Then his work – his sacrifice – has been pointless. Under such conditions, the world darkens, and the soul rebels.” How does God respond to Cain's distress?

“The Lord said to Cain, 'Why are you angry, and why has your countenance fallen? If you do well, will you not be accepted?'” (Genesis 4:6). God suggests that if Cain acts properly, Cain will be successful. The world is not against him. Indeed, the Creator of the world is trying to help him. He can do something about his predicament. He is not a helpless victim. God reminds Cain of his freedom. He can make the choice to make himself and the world better.

God tells Cain, “And if you do not do well, sin is crouching at the door; its desire is for you, but you must master it” (Genesis 4:6). Peterson's interpretation of this passage is reminiscent of St. John Paul II's in Evangelium Vitae:

God, although preferring Abel's gift, does not interrupt his dialogue with Cain. He admonishes him, reminding him of his freedom in the face of evil: man is in no way predestined to evil. Certainly, like Adam, he is tempted by the malevolent force of sin which, like a wild beast, lies in wait at the door of his heart, ready to leap on its prey. But Cain remains free in the face of sin.

Even now, Cain can shut the door on the predator. He can learn to be a slinger. He can take control of his life, make the proper sacrifices, and restore order. “Cain is obviously not very happy about this whole answer,” notes Peterson. He continues:

The last thing you want to hear if your life has turned into a catastrophe and you take God to task for creating a universe where that sort of thing was allowed, is that it's your own damn fault, and that you should straighten up and fly right, so to speak, and that you shouldn't be complaining about the nature of being. But that is the answer he gets.

“Cain said to Abel his brother, 'Let us go out to the field'” (Genesis 4:8). Cain gets Abel alone, isolated from everyone else in the family. Cain knew that Abel, skilled in the use of violence against predators, could kill him. Cain risks his own destruction to commit premeditated murder.

“And when they were in the field, Cain rose up against his brother Abel, and killed him” (Genesis 4:8). Rather than imitate his brother, Cain eliminates his brother. In Peterson's words, Cain commits “fratricidal murder, murder not only of someone innocent but of someone ideal and good, and murder done consciously to spite the creator of the universe.” Peterson points out that such malevolence against the innocent, the young, and the good is re-enacted in various school shootings.

“Then the Lord said to Cain, “Where is Abel your brother?” The question, of course, is not about Abel's physical location, but is an invitation to self-awareness and confession of wrongdoing.

Cain replies to God, “I do not know; am I my brother's keeper?” Rather than a humble confession of guilt, Cain lies and implies that God is out of line in asking the question. Rounding out the sins noted by Peterson, St. Basil of Caesareasummarizes the ways Cain missed the mark:

the first sin is envy at the preference of Abel; the second is guile, whereby he said to his brother, Let us go into the field: the third is murder, a further wickedness: the fourth, fratricide, a still greater iniquity: the fifth that he committed the first murder, and set a bad example to mankind: the sixth wrong in that he grieved his parents: the seventh, his lie to God.

The capital vice of envy gives rise to its offspring.

After destroying his ideal, Cain wanders the earth as a homeless fugitive, alienated from his parents, his work, and his homeland.

Filled with self-pity, the murderer casts himself as the victim, “Cain said to the Lord, 'My punishment is greater than I can bear.'” Like Raskolnikov in Dostoyevsky's Crime and Punishment, Cain exemplifies the hellish state of a murderer and the principle of Augustine, “the punishment for sin is sin.”

“The Lord put a mark on Cain, lest any who came upon him should kill him. Then Cain went away from the presence of the Lord, and dwelt in the land of Nod, east of Eden” (Genesis 4:14-16). God intervenes to circumvent what could have been the beginning of a cycle of violence. Brother kills brother. Friends of Abel kill Cain. Friends of Cain kill friends of Abel, and so on.

One brother, Abel, provides an early model for the redemptive savior, as a genuine and voluntary incarnation of Logos. The other, Cain, refuses his responsibility, justifies that refusal with his existential pain and fear, and turns savage, destructive, corrupt and murderous. Thus, two pathways of morality are laid out as primary modes of ethical being, in a world composed of the interplay between chaos and order.

In Peterson's view, “The story of Cain and Abel is one manifestation of the archetypal tale of hostile brothers, hero and adversary: the two elements of the individual human psyche, one aimed up, at the Good, and the other, down, at Hell itself.” Peterson echoes Augustine, who saw Abel as a citizen of the heavenly City of God, and Cain as a citizen of the hellish City of Man.

To cast oneself as an innocent victim like Abel is easy. But Peterson holds that anyone can be Cain. The lessons of Germany's Reserve Police Battalion 101, Solzhenitsyn's Gulag Archipelago, and Milgram's obedience experiment suggest that Peterson is right.