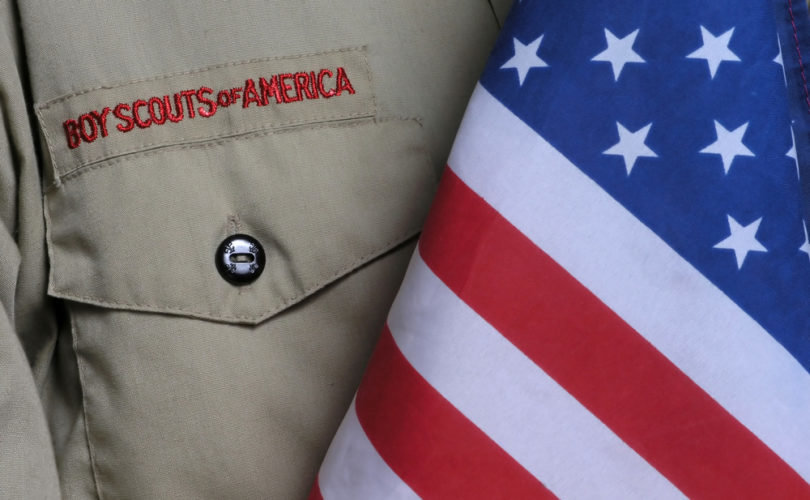 May 22, 2018 (The Public Discourse) – The incremental surrender of the Boy Scouts to the gender revolution has undermined the very reason for their existence.

Earlier this month, the Boy Scouts of America, a venerated organization, announced that it will drop the “Boy” from “Boy Scout” and make scouting available to all sexes. This was not a surprise decision, nor did it come out of nowhere. For the past several years, the Boy Scouts have been in the process of reinventing themselves in the image of progressivism by pursuing a more “inclusive” approach to scouting. The umbrella organization plans to retain its original name, the “Boy Scouts of America” or “BSA,” while officially opening scouting to both boys and girls. “Cub Scouts,” the name for clubs for kids seven to ten years old, is gender-neutral enough to be retained as well. But Boy Scouts, which is for children aged ten to seventeen, will now be known as “Scouts BSA.”

The Boy Scouts are arguably the premier boyhood organization in American history, known for valuing integrity, teaching patriotism, and promoting character and leadership development in young men. Their decision to no longer maintain sex distinction in their membership is a discrediting action.

The Virtues of Sex Distinction

The voluntary decision to drop “boy” from Boy Scouts strikes a blow against the singularly unique reason for the organization's existence – to develop young men. Never was this a decision based on chauvinism, misogyny, or patriarchy. Rather, the Boy Scouts upheld the basic fact of sex difference in their training regimen on the basis that sex-specific difference entails sex-specific development for males and females.

For boys to mature into men, they need to be exposed to the virtues of manliness – fortitude, self-sacrifice, bravery, integrity, skillfulness. This is not rogue machoism or arrogant brutishness. Nor is it to insist that girls cannot demonstrate these virtues. Rather, it is to recognize that virtues in men manifest themselves in uniquely male ways. Girls demonstrate virtues in uniquely female ways. There was a time when the Boy Scouts were the organization that fostered healthy gender distinctions in America. This is why a counterpart organization arose to do the same for females – the Girl Scouts. Having groups that acknowledge these realities protects the integrity and uniqueness of boyhood and girlhood.

The presence of single-sex groups reflects a biological reality: Men and women are different. Males and females share much in common as equal members of the human species, but they are also distinct. From genetic reality to primary and secondary sex characteristics, men and women differ. This difference is why, for example, recent rule changes were made in track and field competition preventing biological males who identify as Intersex from competing against women, because of the advantage that comes from testosterone. The recognition of physical distinction between men and women is foundational to understanding what true equality between the sexes entails.

But tragically, the Boy Scouts have, for some time, been catering to progressive values, leading them to forsake their tradition and focus instead on pacifying the demands of activists. What began with allowing gay male Scout leaders has led to endorsing transgenderism in its membership. The Boy Scouts have thus become the most respected youth institution in America to kowtow to progressive ideas on sexuality, gender, and gender distinctions. In these actions that reflect departures from natural law and the broader Judeo-Christian moral tradition, the Boy Scouts of America are now a progressive organization, whether they would admit it or not.

The actions of the Boy Scouts are a part of the broader cultural movement to declare sex distinction taboo. Doing something as innocent as calling a boy a “boy” and a girl a “girl” is now considered dangerously retrograde. Intentionally or not, the Boy Scouts' actions are contributing to our culture's assault on reason and the body. Sex difference and gender distinction are naturally occurring social realities that follow from being embodied, sexed creatures. We cannot simply wish – or legislate – these realities away.

I am reminded of something Robert P. George once said: “Ordinary authoritarians are content to forbid people from speaking truths. Totalitarians insist on forcing people to speak untruths.” While I want to exercise caution in assigning bad motives to the Boy Scouts, behind this decision I cannot help but see their participation in a deeply totalitarian aspect of our society, one that is bent on nullifying sex difference and gender distinction. As C.S. Lewis wrote in The Abolition of Man: “When all that says 'it is good' has been debunked, what says 'I want' remains.” Lewis's concern rings true today. Lewis is urging us to reckon with the nature we have, not the one we think we can manufacture or suppress. We can accept this nature, with its limits, or we can attempt to throw it off in a power play that seeks to undermine the very concept of a natural order.

It is no surprise that the Boy Scouts have opened their membership to both sexes. Once the organization accepted homosexuality and transgenderism, it was inevitable that basing membership on sex would fall. All of these realities travel together. The distinction and complementarity of the sexes are either real, corporeal truths that should be acknowledged, or they are enemies to social justice that must be overthrown. Indeed, that is what is happening before our very eyes. If society can be made to believe that marriage is a union of something other than just one man and one woman, there is no reason that society will not also require its citizens to suppress sex difference altogether.

Androgyny demonstrates the fundamental hypocrisy of a culture that esteems fairness and equality but undermines accurate forms of both to serve the cause of political correctness. Because of this, the Boy Scouts organization is a shell of its former self, proclaiming to the broader society that Androgyny Scouts are the only appropriate pathway for human expression in a genderless and gender fluid age.

Yet the Boy Scouts seem aware of their inability to truly suppress sex distinction and gender difference, tacitly acknowledging that something about the difference of boys and girls is necessary to preserve in order to protect the integrity of each. According to the Los Angeles Times, “The arrival of Scouts BSA, however, does not mean that the organization is abandoning gender-segregated Scouting. The program will allow girls to participate and earn the same awards as boys, but they will still be separated by gender.” This is, at least, a half-hearted recognition by the Boy Scouts that what they are doing violates common sense.

Is all of this a ploy to bolster its membership numbers? Maybe. But the Boy Scouts have been in decline for some time already, in spite – or perhaps because – of their increasingly progressive policies. This new decision to finally reject their original raison d'etre is likely to only accelerate decline as parents look on and see an organization unable to muster the courage to stay faithful to its original mission. If I were the father of boys, I would most certainly be looking elsewhere for an institution to shape them in accordance with who they are.

By surrendering to the spirit of age, the Boy Scouts of America have further delegitimized themselves. As an organization, BSA lacks the fortitude to withstand the cultural attack on sex and gender. While a once venerable institution, the Boy Scouts of America are failing both parents and young boys by being held captive by a culture that would deny sex distinctions altogether. Parents of young boys should look elsewhere for organizations that esteem the virtues of boyhood and manhood, such as Trail Life USA.