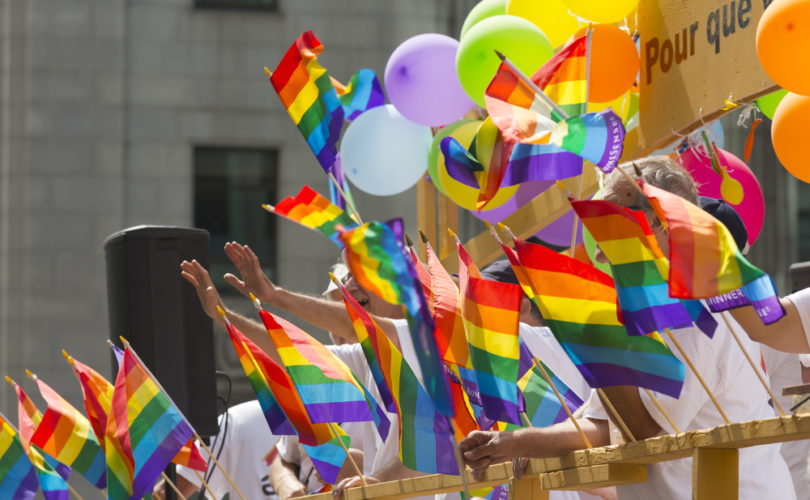 July 16, 2015 (ThePublicDiscourse) — Conjured as it was from Justice Kennedy’s imagination, the Supreme Court’s decision in Obergefell v. Hodges has little to teach us about the Constitution. It does, however, afford us keen insights into the liberal worldview. In the opinion, it is less Anthony Kennedy the Supreme Court Justice than Anthony Kennedy the aspiring liberal political theorist who speaks.

Woven throughout his musings on the dynamic synergies between the various clauses of the Fourteenth Amendment is the central premise of modern liberalism: individual autonomy. It is the very first argument that the Court offers on behalf of the newfound constitutional right to same-sex marriage.

Indeed, in the opening sentence of the decision, Kennedy proclaims all individuals free “to define and express their identity,” thereby echoing his even more grandiloquent pronouncement in Planned Parenthood v. Casey that at “the heart of liberty is the right to define one’s own concept of existence, of meaning, of the universe, and of the mystery of human life.”

On this foundation, the edifice of modern liberalism is built. We are all sovereign individuals, radically free to fashion and refashion ourselves into anything we so please at any point in our lives. Man is the undefined animal. He is auto nomos—self-legislating. Neither God, nor nature, nor tradition, nor the obligations he previously contracted may hem him in. Bruce Jenner may become Caitlyn whenever she so pleases—and then become Bruce again if he wants.

Beyond the rudimentary demands of refraining from harming others, nothing may constrain the choices we make in defining and redefining our identity. This is democratized, domesticated Nietzscheanism. Prometheus not fully unbound—just mindful of the rights of others. This, it should be pointed out, is also the starting-point of libertarianism—but also its end point. Not so for liberalism.

Loneliness, Insecurity, and the Need for Recognition

Liberalism’s exalted view of man’s limitless possibilities, paradoxically enough, is not accompanied by an equally exalted view of his inner strength and resolve. One might think that liberalism would encourage individuals to trust in themselves and to be scornful of society’s staid bourgeois conventions in defining and expressing their identity.

It doesn’t. For all his purported god-like powers of self-creation, liberal promethean man is actually a weak, insecure, and isolated individual. It is not enough that he define and express his identity. He needs others to recognize it, embrace it, and celebrate it. He needs the state to confer dignity upon it.

Otherwise, he may find himself marginalized by his peers, crippled by their disapproving looks, and insecure in his choice of an identity. After all, a particular lifestyle or living arrangement may not be illegal, but it can still be viewed as dishonorable by some. Even before the Court’s ruling, gay couples could marry in a house of worship or banquet hall in any of the states that still defined marriage as the union of a man and a woman. But they carried the lack of state recognition for their marriages like the mark of Cain.

“Outlaw to outcast may be a step forward, but it does not achieve the full promise of liberty, ” explains Kennedy. The Court’s opinion is replete with references to stigma, hurt, and humiliation. “It demeans gays and lesbians for the State to lock them out of a central institution of the Nation’s society.” It is therefore incumbent upon the state to dignify them. As Matthew Franck wrote in Public Discourse last week: “In Kennedy’s mind, the Constitution has been converted into a great Dignity Document.”

An earlier generation of liberals would have told the man to go to hell with his marriage certificate. “We don't need no thought control,” they would have yelled. “All in all you're just another brick in the wall!” To have the suits recognize your alternative lifestyle would have defeated the whole purpose of embracing it in the first place.

Contemporary liberalism, by contrast, views man as a weak and fragile creature. Adversity doesn’t forge character. It stigmatizes and demeans. Unless others affirm our choices, they are worthless. We have no unshakable inner convictions or faith. We are all insecure.

Promethean man, it turns out, is a pathetic creature. He thinks himself the measure of all things, but must in fact have his solipsistic existence be publicly affirmed and dignified by the state. He is simultaneously everything and nothing.

Liberalism’s celebration of human autonomy is obviously incompatible with any conception of an unchosen nature that restricts our scope of action. Nevertheless, Kennedy twice appeals to the idea of a permanent nature in the decision. Homosexuals have an “immutable nature,” he asserts. They are born gay and cannot change. So are heterosexuals, bisexuals, and all other flavor-du-jour-sexuals for that matter: “sexual orientation is both a normal expression of human sexuality and immutable.”

The essence of liberty is the freedom to define and express one’s identity, just not when it comes to sexual orientation, which is innate and immutable. We can choose our gender—that is not fixed at birth—but our sexual orientation is handed down to us by the gods and must be accepted with passive resignation (for a contrasting view, see this Public Discourse essay by Paul McHugh and Gerard Bradley).

Turning to marriage, Kennedy implicitly carves out another exception to the realm of autonomy. Marriage, though clearly not possessing a permanent nature, is nevertheless “essential to our most profound hopes and aspirations.” This implies that happiness outside of marriage is not possible. No one will be forced to get married—but all who aspire to be happy (and who doesn’t?) will want to. Marriage is no longer what earlier liberals called an “obscene bourgeois institution” or “a comfortable concentration camp.”

Only marriage can respond “to the universal fear that a lonely person might call out only to find no one there,” writes Kennedy. Not to marry is to “be condemned to live in loneliness.” Lovers, friends, parents, siblings, cousins, aunts, uncles, nephews, nieces, neighbors, coreligionists, brothers-in-arm, colleagues—none of them can be counted on to respond to our lonely cries of anguish. All bachelors are not only unmarried—they’re also unhappy.

All this adds up to a really interesting coincidence. In deliberating on the question of gay marriage, Justice Kennedy proclaims that we are absolutely free to be who we want to be—except when it comes to gayness and marriage. Only Kennedy’s syllogism trumps autonomy:

Either Kennedy is a sloppy thinker who hasn’t thought through the implications of the autonomy he celebrates, or this is a calculated move on his behalf to elicit public support for his pronouncement by bending his argument to appeal to two widespread beliefs: people are not responsible for their genes, and marriage is good.

David Azerrad is director of the Heritage Foundation’s B. Kenneth Simon Center for Principles and Politics. This article is reprinted with permission from The Witherspoon Institute.