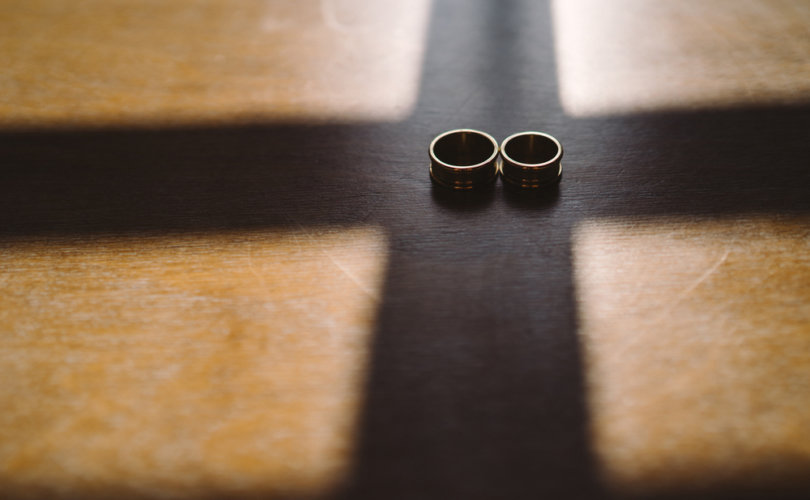 August 23, 2018 (American Thinker) – In its centuries-long efforts to dismantle the load-bearing structures of traditional and classical liberal society, Marxist dogma in its various forms – communism, socialism, neo-Marxism, Cultural Marxism – has embarked on a sustained campaign to weaken and ultimately to abolish the institution of marriage as it has been commonly understood since time immemorial. The dissolution or misprision of marriage, as a contract between a man and a woman committed to raising a family and recognizing its attendant responsibilities, is a prerequisite for the revolutionary socialist state in which the pivotal loyalty of the individual belongs to the sovereign collective, not to the family.

Advocacy and legislation that sunder the intimate love between a man and a woman, that deprive children of male and female parental role models, that compromise the integrity of the family and that dissolve the purpose of marriage as a guarantor of cultural longevity are indispensable strategies essential to realizing the left's master plan. Dismissing the nuclear family as an archaic and repressive arrangement whose time has passed, the state would then operate in loco parentis.

The problem for the left is that the family is a traditional dynamic that precedes and eclipses the tenure of the authoritarian state, not only because it encourages a prior allegiance, but because it allows for the retention of inheritance and property rights within the generational unit. This is anathema to the Marxist vision of, in historian Jacob Talmon's phrase from The Origins of Totalitarian Democracy, the “all-property-owning state,” a function of “political Messianism.” The Marxist offensive against marriage may be seen, in part, as the ideological version of a corporate takeover.

Marx himself married his childhood sweetheart, Jenny von Westphalen, and remained married to her, although his political views did not comport with his lifelong domesticity. In the Communist Manifesto and The German Ideology, he defined marriage as legalized prostitution and a form of female slavery. The fact that he was desperately improvident and ignorant of economics, as Mary Gabriel shows in her fascinating study of the man, Love and Capital, did not prevent him from constructing vast hypotheses grounded on neither his conduct nor his personal experience.

Despite his internal contradictions, he was undoubtedly the most instrumental figure in the campaign to demolish the scaffolding of customary society, including marriage and the family. The Origin of the Family, Private Property and the State, by Marx's collaborator and patron, Friedrich Engles, has made the left's ultraist agenda absolutely clear, referring to “the pairing family and inoculated monogamy” as a community of “leaden ennui” and a modus operandi for the class- and masculine-oriented “bequeathment of property.” It had to be smashed.

An effective way to destroy marriage and the family was advanced by communist theorist Georg Lukács, who introduced the concept of “cultural terrorism,” which involved the liquidation of religion, monogamy, and the ostensibly male-dominated family. Lukács advocated the introduction in the schools of – and as a minister in the 1919 Hungarian Bolshevik government of Béla Kun actually installed – courses on free love, sexual liberation, and Freud's notion of “polymorphous perversity,” which he believed a revolutionary necessity.

We see his pernicious influence at work today in the cultural obsession with sex, the zeal for so-called sex re-assignment, and the insensate proliferation of pronominal “genders” into a Heinz 57 omnium-gatherum. (Canada's Supreme Court whiffling on bestiality is another variant of this rubbish.) It is also a cardinal value in the education establishment, for example in my home province of Ontario, where, under the direction of former premier Kathleen Wynne, an avowed lesbian, sex ed classes exposed young children to varieties of sexual practices far beyond their level of emotional development.

Leftism attempts to dismantle conventional society by unleashing a multi-pronged assault against it, including rewriting history, undermining religious observance and subverting traditional morality, a program sedulously advanced by the pseudo-discipline of “Critical Theory.” This pedantic and ostentatious schematism was promoted by clique of salon provocateurs known as the Frankfurt School in their effort to develop what they called “social emancipatory strategies.” They were the answer to the rhetorical question Lukács asked in his 1916 study “The Theory of the Novel“: “Who will save us from Western civilization?”

Thus, Frankfurt maven Theodore Adorno's influential (co-authored) The Authoritarian Personality denounced standard sex roles and sexual mores as “social prejudice,” psychological dysfunction, and a catalyst for fascism. Popular Frankfurter Herbert Marcuse's Eros and Civilization privileged unrestrained sexuality and all forms of deviancy over traditional codes of sexual and family propriety. Wilhelm Reich, who is said to have coined the phrase “the sexual revolution,” invented the orgone box as an all-purpose therapy machine and radiant “accumulator” to revive and stimulate sexual energy. Other eminent names associated with the school and peddling its ruinous ideology are Max Horkheimer, a director of the institute, psychoanalyst Erich Fromm, sociologist Jürgen Habermas, and philosopher Agnes Heller. The combined intellectual power is formidable, but it is totally devoid of wisdom and practical good sense.

Admittedly, we know, as PJ Media columnist Sarah Hoyt points out, that “[o]nce in power, every leftist regime is sexually repressive” – but that is for later, after the revolution has succeeded or a national despotism has been established. One may also note the apparent contradiction in leftist sexual politics, which hypes the nonsensical campus rape meme and launches a vendetta against men, especially straight white males, while at the same time teaching grade-schoolers about sexual variations and instructing co-eds in the use of dental dams, latex accessories, and sex toys. The contradiction is apparent only since the mandate of the left is to disrupt the bond between men and women. Men grow reluctant to marry, and women increasingly fail to make good wives and mothers. Same-sex relationships become more and more common, and the state goes along with same-sex couples calling themselves married in 26 countries.

The putatively enlightened Eric Anderson, an academic who teaches Sport, Masculinities and Sexualities at the University of Winchester, U.K and is a former student of prominent Stony Brook feminist Michael Kimmel, considers this development a manifestation of “inclusive masculinity” and an evolution in cultural sensitivity. He is particularly proud of the supposed “cuddling” phenomenon among male Millennials who like kissing men and has marshaled a salmagundi of dodgy statistics to prove his contestation. Anderson and Kimmel are illustrations of how the erotic fraternity surreptitiously advances its cause under the sign of presumably open-minded sophistication. In the last analysis, these soi-disant cultivated visionaries happily serve the left's agenda.

As noted, the left has many weapons in its incendiary arsenal, but perhaps its most piercing labret in its war against the traditional family is the penetration of the institution of marriage and its replacement by an indiscriminate caricature of its original purpose. Its advocacy for pseudo-marriage is therefore not surprising. It is true that communism may once have purged gays and, as Hoyt implies, will do so again, but in its assault on the family structure, its socialist epigones have long jumped on the redefining marriage bandwagon. As Paul Kengor writes in Takedown: From Communists to Progressives, How the Left Has Sabotaged Family and Marriage, “[a]s long as the traditional family is reversed, Marxism is advanced.” Marriage redefined, he continues, is “an ideal, handy device to destroy the family.”

Lest I be misunderstood, I do not endorse civil restrictions on or repression of homosexuality. So long as common law remains in force (e.g., proscribing pedophilia or polygamy), couples should be free to follow their passions and desires. They are free to enjoy recreational sex or to love whomever they wish. As the late Canadian prime minister Pierre Trudeau famously said, “there's no place for the state in the bedrooms of the nation.” But when same-sex couples usurp the fiscal, estate, and legal privileges of productive and nurturing procreant families – truly an unearned increment – and certainly when the right to marry can be claimed by any category of individuals and any cosplay group with no relation to the traditional armature of Western civilization, the disintegration of social norms and usages must inevitably follow. As Engels and company knew, marriage and the family constitute the ground on which the battle is most auspiciously fought.

Armed with both the theoretical and empirical power of sexual license, the left now appears unassailable, cresting with self-assurance. Its campaign against the institution of marriage seems close to fulfillment. There can be little doubt that once the traditional institution of marriage, or even binding common law (sui iuris) arrangements within heterosexual couples, has been disabled, when forms of sexual deviance are encouraged, when men embrace MGTOW (Men Going Their Own Way) and women are regarded as victims of the so-called patriarchal family, and when marriage distorted beyond its definition has been ordained and consecrated as normal, the new dialectic of Marxist inversion may well have won the day.