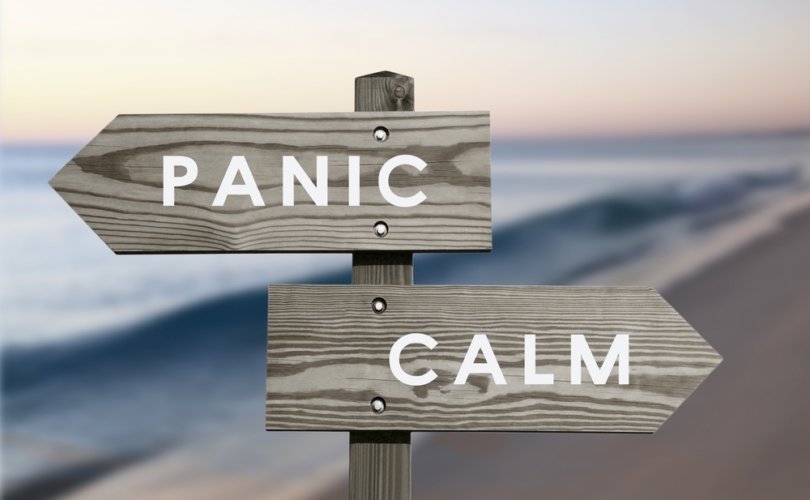 March 4, 2016 (BreakPoint) — It was 1939, just before the outbreak of what would come to be known as the Second World War. Hitler was on the move, the dominoes were starting to fall. The British government, facing what Winston Churchill would soon call “an ordeal of the most grievous kind,” needed to bolster the people’s flagging spirits. So it began producing a series of propaganda posters.

One of them, with a bold, red background, was to be used only in the event of an invasion. That invasion never came, and so the poster was never used. But the slogan on it has lived on, and it has particular relevance to our day.

The message: “Keep Calm and Carry On.” I like that.

Now let’s face it, American society, while not facing an immediate existential threat, nevertheless faces cultural decay that is a direct result of our lamentable rejection of the Judeo-Christian worldview.

Whether it’s the redefinition of marriage; continuing attacks on religious liberty; the relentless push to undermine human dignity and the protection of the unborn; fears for what’s ahead politically in this momentous election year; or whether it’s concerns about ISIS or Iran that are keeping you up at night; the fact is, “Keep Calm and Carry On” is an appropriate watchword at this moment in American history.

Now of course as followers of the Lord Jesus we must keep calm and carry on. It’s our duty. If this moment has taught us anything, it’s that cultural power is fleeting. In the old days, calling yourself a Christian was a sure route to respectability, whatever you believed in your heart.

While that’s still true in some quarters, now lots more people look on matters of faith with a jaundiced eye, and growing numbers of them aren’t even interested in the old American ideal of religious tolerance. Yet for all these unhappy and undeniable trends, we’re still called—you guessed it—to keep calm and carry on. We must keep standing for righteousness, come what may. God remains on His throne.

We know the end of the story. We’re Christians and are called to act like Christians, whatever happens between now and then.

One of my heroes, Dietrich Bonhoeffer, who in his own way fought the Nazis, counseled not withdrawal but engagement in a fallen world. “Jesus Christ lived in the midst of his enemies,” Bonhoeffer said in “Life Together.” “At the end all his disciples deserted him. On the Cross he was utterly alone, surrounded by evildoers and mockers. For this cause he had come, to bring peace to the enemies of God. So the Christian, too, belongs not in the seclusion of a cloistered life but in the thick of foes. There is his commission, his work.”

And what is our work as exiles in post-Christian America? I’m glad you asked!

While we must always be open to God’s specific calling in our lives, let me suggest that we all recommit ourselves to some essentials of our own “life together,” wherever our culture happens to be. The culture may be changing at warp speed, but our duty does not.

First, let’s commit ourselves anew to biblical faithfulness. That means discovering what the Word teaches and holding onto that, no matter what.

Second, let’s display the beauty of the good news in word and deed, in evangelism and in acts of compassion—“in the thick of our foes.” We may not be able to argue our neighbors into the kingdom, but there is no law against inviting them.

And, finally, let’s recommit to prayer. As the Lord told the exiles in Babylon, “But seek the welfare of the city where I have sent you into exile, and pray to the Lord on its behalf, for in its welfare you will find your welfare.”