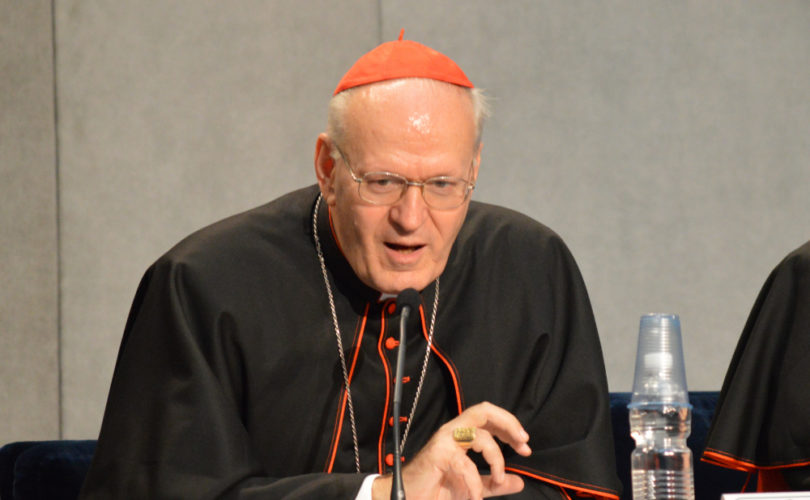 ROME, July 23, 2015 (LifeSiteNews) — Cardinal Peter Erdö, the General Relator of the Synod of Bishops on the Family, had been involved in presenting the scandalous mid-term report of the last Synod of October 2014. But when asked about the troubling part about the “positive elements” to be found in homosexual relationships, he ducked and referred to his colleague Archbishop Bruno Forte, saying: “he who wrote the text must know what it is talking about,” implying that he had had very little to do with that specific part of the report. The abiding impression that Cardinal Erdö himself had not been in support of some of the liberalizing agenda of that mid-term report of the last Synod, was recently confirmed by some important events.

Most recently, on June 23, Cardinal Erdö participated, together with Cardinal Lorenzo Baldissieri (Secretary General of the Synod of Bishops) and Archbishop Bruno Forte (Special Secretary of the Synod), at a press conference at the Vatican in order to present the Instrumentum Laboris, or working document, for the upcoming October 2015 Synod of Bishops on the Family. At this press conference, a journalist asked him about the question of the “remarried” divorcees and whether or not the Synod will support admitting them to Holy Communion, after all.

Cardinal Erdö's response shows his own fidelity to the teaching of Jesus Christ Himself. He said:

The issue is a deep one, and we cannot provide an exhaustive answer with a brief response. There are serious matters here, because the central question of the Synod is ultimately: “What is Christianity?” If we are a natural religion, then we should reflect philosophically on the world, on human experience, and seek a solution which perhaps changes with each generation. Or, are we the disciples of Jesus Christ, who was a concrete historic [divine] person with a concrete teaching, and with whom we connect history and tradition, and whose teaching is identifiable enough. […] And we see precisely in this disciplinary tradition that the teaching of Jesus on adultery was a very demanding teaching, scandalous even in His own day. Even His own disciples said: “If this is the way it is, it’s not worth it to marry.” Therefore, it wasn’t the widespread opinion in Judaism in His time. Even the Rabbis in Galilee in the times of Jesus – whose teaching is now better researched and more widely known – had other opinions, which were different from His. And so the teaching of Jesus was very strong.

After presenting some historical examples of how people down the years have requested from the Church that she change her moral teaching on marriage, Cardinal Erdö concluded:

Therefore, the Church has always known that her message on marriage contains something difficult and provocative. We need to keep the seriousness of this fact in mind, and yet still seek to address the situations of the world today, because our mission is directed to the world today.

With this statement, Cardinal Erdö made clear that he is arguing in favor of the preservation of the traditional teaching of the Church on marriage. Two other recent events in which Cardinal Erdö was supportively involved are worth mentioning in this context, because they seem to point in the same direction.

First, on May 11-12, 2015, Cardinal Erdö, as president of the Council of the European Bishops' Conferences (CCEE), together with the president of the Slovakian Bishops' Conference, Archbishop Stanislav Svolensky, had hosted a conference in Bratislava, Slovakia dealing with the same topic as the upcoming 4-25 October 2015 Synod of Bishops on the Family in Rome. At this conference, under the leadership of Cardinal Erdö himself, the traditional moral teaching of the Church was strongly defended.

For example, Archbishop Zelimir Puljic, president of the Croatian Bishops' Conference, told the Catholic newspaper from Zaghreb, Glas Koncila, that this meeting was a great success. He said: “A successful, fruitful society is based upon healthy families with many children.” He expressed his sorrow about the decline of births and the overall diminishing of the population in Croatia.

Participants of the Bratislava Conference were the presidents of the Bishops' Conferences of Slovakia, Ukraine, Belarus, the Czech Republic, Hungary, Poland, Croatia, and Lithuania. According to a Communiqué about the Conference, the participants spoke about the “new views upon family in the postmodern era” which “impose new norms that are not in accordance with the classical view upon the family.” Archbishop Puljic criticized the idea of individualism which now permeates all areas of human life and which impoverishes the very life of families. Egoism and loss of Faith are, according to Puljic, at the root of problems in the families today. According to the Communiqué, the conference in Bratislava also discussed the Gender Ideology which now shows itself also in their countries, even influencing already their educational systems, their legislation, and their educational programs. “We have discussed what is given in human nature and what is written in Holy Scripture. God created man as male and female – and not in 35 different human identities,” said Archbishop Puljic at this Bratislava conference. He stressed the importance of passing on to the younger generation the standards and virtues of the Gospels: “The bishops expressed their gratitude to those families who pass on to the younger generation the values of the Gospels. Because when these values break down in the families, then the society will also break down.”

As we can see, at this event in Bratislava, the traditional moral teaching of the Catholic Church was strongly defended.

At a second event, it was the same. This event, which took place in Africa, involved again Cardinal Erdö. On May 28-31, 2015, African and European Bishops met in Mumemo, Mozambique also to discuss the upcoming Synod of Bishops. These bishops were from the Symposium of Episcopal Conferences of Africa and Madagascar (SECAM) and the Council of the Bishops' Conferences of Europe (CCEE), with a few representatives from Western Europe, but not from the group of putative reformers.

Speaking at the opening of the seminar, which had 35 participants (including 22 bishops), Archbishop Gabriel Mbilingi of Angola said that the 2015 Synod must “rediscover the saving plan of God, according to the teaching of Sacred Scripture and the Church, in the pastoral action in favor of the families, promoting the values of marriage and the family that are to be put into practice also in the life of young people and spouses, helping them to appreciate the greatness and the beauty of the gift of indissolubility, in order to arouse their desire to live up to it together and to build more and more.”

In his own message at that meeting, Cardinal Erdö then reminded us that only a life away from sin can help us to live a “true humanity.” Jesus Christ is for us the reference point and guide. As Erdö put it: “Christ – who has taught us the full truth about the human person, as well as about marriage and the family – always remains the unique reference point for our faith and for our lives.” He reminded the audience also of the importance of not conforming to the current world we are in, but to follow Christ Himself, saying: “We are not called to look at the world simply with our philosophical categories and only on the basis of empirical personal experiences or starting from sociological polls or studies; but we are to be disciples of Christ, and so we must look to Christ, we must listen to His voice through history, through the Sacred Scripture, through the continuous testimony of the community of the Church.”

Catholic News Agency's journalists Andrea Gagliarducci and Carl Bunderson see in these remarks of the cardinal a distancing of himself from some of the German prelates and bishops who now claim that the Church has to adapt much more to the “life realities” of today. On June 5, the two journalists said:

Cardinal Erdö's comments can be seen as a salvo against the program of numerous bishops from Western Europe – such as those of Germany – who are suggesting an opening to the acceptance of same-sex unions, and the admission of the divorced and remarried to [Holy] Communion. While Cardinal Erdö urged looking first to Christ – rather than empirical personal experiences or sociological studies – the German bishops' response to the preparatory questionnaire for the 2015 Synod noted that “the vast majority” of respondents expect the Church to accept homosexual relationships on the basis of a “moral theological evaluation which takes account of pastoral experiences and of the findings of the humanities.”

It is therefore to be hoped that Cardinal Erdö, with the support of many African and East European Bishops, will be better prepared now to respond to the liberalizing agenda at the upcoming October 2015 Synod of Bishops on the Family and to defend the permanent teaching of Our Lord Jesus Christ.