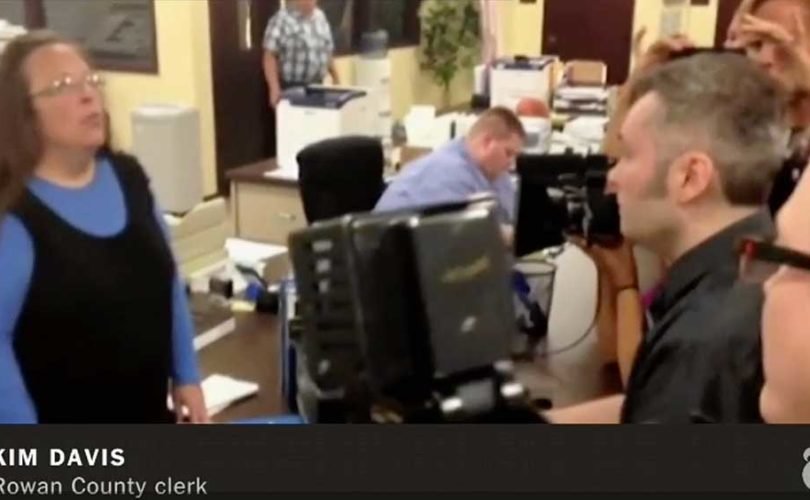 September 4, 2015 (Mass Resistance) –The judge told her that she’ll stay in jail until she’s willing to change her mind — and go against her conscience and faith. He said that he’d review the situation in a week. The judge said that he jailed her because fining her  “would not bring about the desired result of compliance”.

There are approximately 125 county officials throughout Kentucky who can issue “gay marriage” licenses. But the judge was adamant that every county official must be forced to do it and that religious freedom cannot be allowed, despite the First Amendment.  “The idea of natural law superseding this court’s authority would be a dangerous precedent indeed,” he said.

In 2004, 75% of Kentucky voters passed a State Constitutional Amendment restricting marriage to one man and one woman. On Thursday, Sept. 3, County Clerk Kim Davis was sent to jail by U.S. District Judge David Bunning because she refuses to issue “gay marriage” licenses, a decision which she says is rooted in her strong Christian faith.

Most pro-family people didn’t see the chilling article that appeared in The Nation, a major left-wing magazine, the day before the U.S. Supreme Court “gay marriage” ruling came out. The article outlines where the LGBT movement is going after “gay marriage.”

The Nation article, “What’s Next for the LGBT Movement?”, quotes four high-profile LGBT activists who reveal that “gay marriage” was never their final goal. The LGBT movement will not be stopping to rest, they say. Their plan is to delegitimize and crush all opposition to their agenda everywhere in America – particularly in the churches — no matter how small.

Some of the things the article outlines:

Last month the Denver City Council moved to deny the Chick-fil-A restaurant chain permission to do business at the Denver Airport because the company’s president said he does not agree with “gay marriage.” One Council member labeled the president’s pro-marriage beliefs “discriminatory political rhetoric,” and must not be allowed to make profits from the city’s airport. (Chick-fil-A restaurants have never been accused of actually discriminating against anyone.)

And of course, there’s the upswing of left-wing hate and demonization of religious people. The day after Kim Davis was jailed, the Boston Globe prominently published an op-ed article titled “Kim Davis follows the footsteps of George Wallace” which states, among other things, that “Davis is just the latest in a long, infernal line of fanatics to contort their so-called faith into an excuse for hatred and division.” The Left’s hatred of religious people is visceral, and now it’s coming to the forefront.

The jailing of Kim Davis by Judge Bunning, like most of the Left’s actions, has more than a whiff of hypocrisy. When San Francisco Mayor Gavin Newsom began illegally ordering county clerks to issue “gay marriage” licenses in 2004, or in 2009 when California clerks (and the Governor) ignored the Prop 8 ruling against issuing “gay marriage” licenses, no judge intervened at all.

It pains us to say it, but for decades the pro-family movement has been crippled from gaining ground by cowards and compromisers, from top to bottom. Don’t get us started on what led to the disastrous the Supreme Court “gay marriage” ruling.  And it continues with the Kim Davis issue.

While Kim Davis sits in jail, five of her six deputy clerks shamelessly have agreed to abide by the judge’s wishes and started issuing “gay marriage” licenses. (The one holdout is her son.) According to news reports, starting the very next day they were issuing them quite cheerfully, even shaking the hands of the newly “married” homosexual couples.

A disturbing number of pro-family and church leaders across the country have sided with the Federal Judge, saying that Kim Davis should go to jail for “not following the law.”  (Actually there is no “law” on the books – it is only a court ruling. Nor could the judge cite such a law.)

Even the National Review has published an article saying “[R]eligious-liberty protections cannot act as a bar to gay couples: If the law permits a U.S. citizen to get a license, there must be a way for the gay couple to access it, with their dignity intact.”
Wonderful. What a lame movement we're in!

What can good people do?

We can certainly see what’s coming up. It’s a hardcore take-no-prisoners approach. We must react accordingly. What most of our movement has tried hasn’t worked and isn’t going to work.

MassResistance believes that their whole program must be confronted. Using what resources we have, we believe in taking the offensive. This means challenging that movement everywhere we can. First and foremost means not holding back on telling the unabashed truth, no matter what the consequences. (For example, most conservatives are squeamish about talking about the well-documented medical and psychological destructiveness of homosexual behavior.)

The LGBT movement wins when we become afraid to confront them.