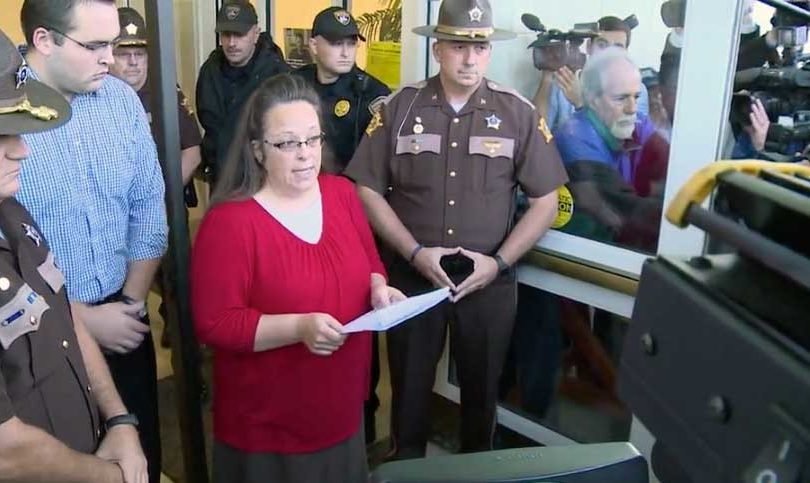 Rowan County, Kentucky, September 14, 2015 (LifeSiteNews) – Monday morning, Rowan County Clerk Kim Davis returned to work and read from her handwritten statement just prior to opening the Clerk's office. She began by saying, “I love my Lord Jesus, I love all people, and I love my job. I want to continue to serve all three as I have tried to do until now.” During parts of her statement, Kim Davis became emotional, especially when she explained that she had been placed in a position to violate her conscience, which she said she could not do.

Kim Davis said that from the beginning she had asked for a reasonable accommodation to remove her name and authoritative title as the Clerk of Rowan County from the marriage licenses, a request that has been ignored or not acted upon by Governor Beshear or the court. She explained that she could not issue a license with her name and title affixed to it that authorizes a marriage that is contrary to God's definition of marriage as the union of one man and one woman. Because she could not violate her conscience, Kim Davis spent six days in jail. Kim stated, “I spent six days in jail because I could not abandon my faith.” She was released last Tuesday. From then until now, Kim has spent time with her family and in prayer. She struggled with what to do, and finally in the early hours on September 14, she was at peace with the decision she announced today.

Toward the end of her statement, Kim Davis said, “Effective immediately, and until an accommodation is provided by those with the authority to provide it, any marriage license issued in my office will not be issued or authorized by me. I want the whole world to know …  if any Deputy Clerk feels that they must issue an unauthorized license to avoid being thrown in jail, I understand their tough choice, and I will take no action against them. However, any unauthorized marriage license that they issue will not have my name, my title, or my authority on it. Instead, the licenses will state that they are issued pursuant to a federal court order.” She mentioned that she has grave doubts whether such licenses are valid, but she again called upon the Governor, the legislature, and the court to act to accommodate her deeply held religious beliefs and those of other clerks in Kentucky.

Kim Davis ended the press conference by asking, “Are we not big enough, loving enough, and tolerant enough to find a way to accommodate my deeply held religious convictions. While my case may be the most visible right now, there are millions of people in public and private sectors that are in the same position and who also need reasonable accommodations.”

“Kim Davis is making a reasonable and good faith attempt to substantially comply with Judge Bunning's order without violating her conscience. Kim should never have to choose between obeying God or leaving her elected position as the Clerk of Rowan County. Kim Davis renews her call to the Governor and the legislature to act to accommodate her and other clerks. The decision that Kim announced this morning balances her deeply held religious convictions while respecting the court order,” said Mat Staver, Founder and Chairman of Liberty Counsel.

Liberty Counsel will continue to move forward with Kim Davis's pending appeals, including the briefing due this week objecting to Judge Bunning's expansion of his injunction order to the entire world.