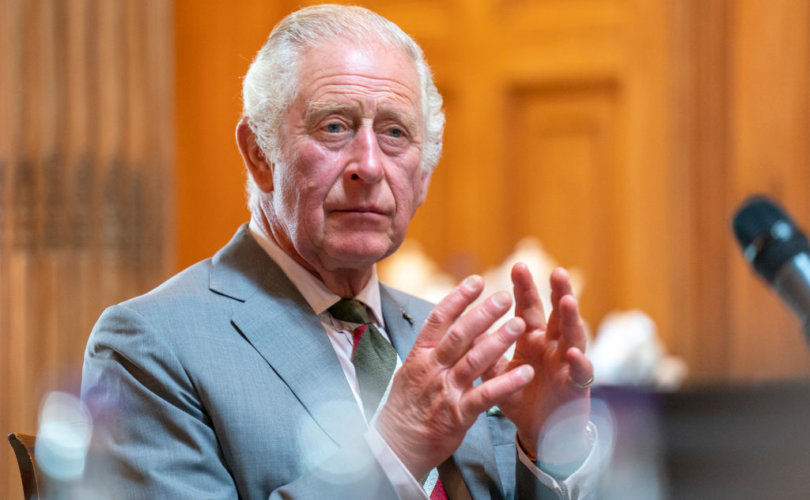 LANARK, SCOTLAND - SEPTEMBER 07: Prince Charles, Prince of Wales, known as the Duke of Rothesay while in Scotland, during a roundtable with attendees of the Natasha Allergy Research Foundation seminar to discuss allergies and the environment, at Dumfries House, Cumnock on September 7, 2022 in Lanark, Scotland.Jane Barlow - WPA Pool/Getty Images

(LifeSiteNews) – Queen Elizabeth II’s son Charles, who ascended the British throne in the wake of her death on Thursday, co-hosted the original meeting for the Great Reset, a totalitarian initiative of the World Economic Forum, with WEF Chairman Klaus Schwab.

In a video released to mark the launch of the Great Reset, then-Prince Charles warned that the Great Reset plan, which includes “green” policies that would suffocate businesses and individual freedoms worldwide, is a matter of urgency.

“We have no alternative, because otherwise, unless we take the action necessary and we build again in a greener and more sustainable and more inclusive way, then we will end up having [more] pandemics and [more] disasters accelerating global warming and climate change,” said Charles, parroting the refrain of the WEF that major global interventions in business practices and consumption habits are needed to avert an “impending disaster.”

Charles proposed that the world “seize” the opportunity presented by the COVID-19 “crisis” — also a clarion call of the WEF — to create “a more circular bioeconomy that gives back to nature as much as we take.”

He noted that this would involve net zero carbon emissions and the use of carbon pricing to achieve this end, a system whereby the “external costs” of greenhouse gas emissions are tied to their sources to a price, usually on the carbon dioxide emitted. These costs can be conceived as accounting for alleged consequences of climate change are far removed from emissions themselves as damage to crops and loss of property from flooding.

In 2019, the U.K. became the first major economy to set a 2050 net zero carbon dioxide emissions target, the same proposed by the WEF in a challenge issued to their global business participants prior to their 2020 annual meeting.

In order to achieve this goal, the U.K. government’s chief scientific adviser has encouraged the British public to reduce their meat intake and fly less often to cut national carbon output. In a step further, U.K.’s Climate Change Committee went so far as to criticize the government for omitting demands for dietary and travel restrictions as part of its 2030 climate change strategy.

The committee proposed that individuals should cut their meat intake by around 20 percent before 2030 and a further 15 percent within the following 20 years in order to convert the land used for meat and dairy farming into space for trees.

Even short of such a government mandate, another major WEF proposal endorsed by King Charles III — carbon pricing — would ultimately hurt the middle and lower classes by driving up the cost of business and thereby passing down expenses to consumers, who would carry the burden of such “green” policies if businesses themselves aren’t forced to shut down first for lack of profit.

Meanwhile, over 1,100 scientists and professionals have signed a World Climate Declaration (WCD) declaring that “there is no climate emergency,” arguing that carbon dioxide is not a pollutant, that natural as well as anthropogenic factors cause global warming, that the warming is far slower than predicted, and that such warming has not increased natural disasters.

The Great Reset has been described by conservatives as a threat not only to economic welfare, but to the family. As LifeSite reported, one of the key themes of the Reset is “LGBTI Inclusion.” Since June 2020, the World Economic Forum has run such articles as “Great Reset: Why LGBT+ inclusion is the secret to cities’ post-pandemic success” and “Why being an LGBT+ ally can transform lives – yours included.” With Microsoft and Pepsi, they rolled out a program called “Hour of Pride” to propagate “LGBTQI+ inclusion during the COVID-19 crisis.”

The WEF would ultimately co-opt nations and their sovereignty with the help of political leaders, such as WEF Young Global Leaders Justin Trudeau and Emmanuel Macron who share the aims of the Great Reset, if not through outside pressure and influence, including the sway of wealthy mega-corporations allied with the WEF.

“What does the Great Reset look like? This is what it looks like: The people in charge doing whatever they want because they’re in charge. No principle is universal. No standard is evenly applied,” Tucker Carlson opined in 2020.

The British Monarchy has a long history of refraining from interference with the decisions of Parliament, and in fact, for the last several centuries, such interference has been very rare across the remaining monarchies of the world. However, British laws still require Royal Assent to go into effect, which will now come from King Charles III.

King Charles III as well as his father Prince Philip have both attended Bilderberg meetings, a highly secretive annual forum used by world elites since 1954 to further their vision for the world.

Addressing the claim that the meetings are used to achieve one-world government, Denis Healey, a Bilderberg group founder and steering committee member for 30 years, said in 2001, “To say we were striving for a one-world government is exaggerated, but not wholly unfair.”