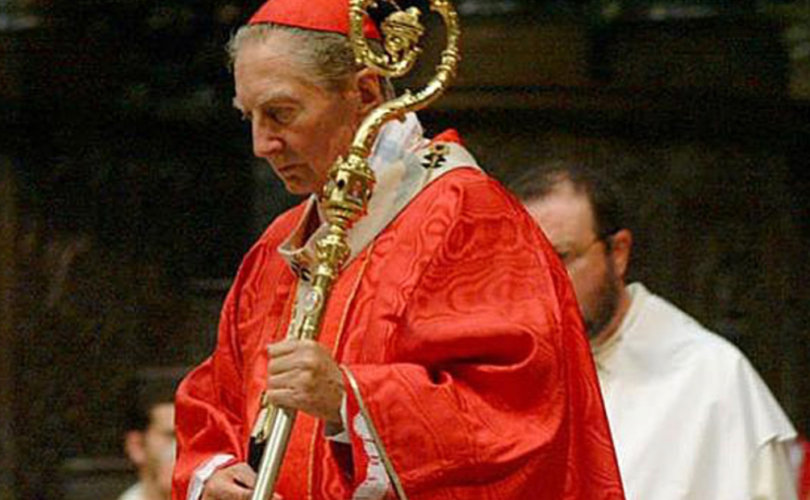 March 9, 2018 (Crisis Magazine) — Before his death in 2012, Cardinal Carlo Martini eerily called himself an “ante-pope,” a “precursor and preparer for the Holy Father.”

Martini was the leading antagonist to Popes John Paul II and Benedict—a Jesuit famous for groaning that the Church was “200 years behind.” In Night Conversations with Cardinal Martini, he cringed at the “major damage” caused by Humanae Vitae. The Church spoke “too much” about the sixth commandment and sin. He said legal abortion was, ultimately, “positive.”

For Martini saw himself as a dreamer who kept us “open to the surprises of the Holy Spirit.” Hadn’t the prophet Joel said that your sons and daughters would prophesy and your old men would dream dreams? The old cardinal dreamed of young “prophets” who’d criticize the Church and a “strong middle generation” who’d effect “changes.”

Martini said that in “preparation” for the 2005 papal election, he and others discussed the “new answers” that the next pope would “have to give” on sexuality and Communion for adulterers. For Martini was the leader of the St. Gallen “mafia,” the anti-Ratzinger group that wanted a “much more modern” Church under Cardinal Bergoglio.

According to Austen Ivereigh’s The Great Reformer, Cardinal Bergoglio quoted Martini frequently and was introduced by him to the Gallen group after the two Jesuits reconnected in 2001. Cardinal Bergoglio placed second in the 2005 conclave, amidst a “dramatic struggle.” The group reportedly ceased meeting the following year, and Martini—long sick with Parkinson’s—died in 2012.

But in a fiery last interview published immediately after his death, the ante-pope burned with disdain.

The Church was “tired,” its rites were “pompous,” and he who had dreamed of a “young church” now stared at countless ashes. How he wanted the embers beneath the ashes to burn! Where were the men who burned for the spreading of the “spirit”? Where were the men who would preach “discernment” and carry the Eucharist to those in “complex family situations”?

“Are we afraid? Fear instead of courage?” he cried.

As Ivereigh notes, Cardinal Bergoglio could soon be heard quoting the jeremiad, telling the embers to burn beneath the ashes of a Church that kept Jesus “tied up in the sacristry.”

Months later, the “Martini Pope”—as Sandro Magister puts it—now reigned. Pope Francis soon praised Martini as “prophetic”—a “father for the whole church”—and hailed his agenda of “focusing” on synods. In 1999, Martini “had a dream” of hurtling the Church into “permanent” synodality—that is, permanent revolution. The decentralized, “synodal” Church would foment changes on marriage, sexuality, penitential practice, priestly celibacy, women in the Church, ecumenism.

So at the rigged Synod on the Family, one Gallen alumnus, Cardinal Kasper, pushed for Communion for adulterers and another—who had told a king to legalize abortion and a sexual abuse victim to seek forgiveness—waxed poetic about “the womb of mercy.” A leading Martini disciple, Archbishop Bruno Forte, drafted the interim report on the “positive” aspects of sins against purity—and later laughed that Pope Francis had promised to “draw out the conclusions” for Kasper’s proposal because speaking “plainly” would’ve made a “terrible mess.”

Cardinal Baldisseri—who, according to The Rigging of a Vatican Synod?, was overheard explaining how he’d manipulate that synod—calls this year’s synod on young people a “continuation of the subject of the family.” He says the youths bemoaning Church “prohibitions” via web surveys and Facebook will marvelously prophesy what Christ wants to “cut out.”

“As in the days of Samuel and Jeremiah, young people know how to discern the signs of our times, indicated by the Spirit,” the synod’s preparatory document intones. That text, as Matthew McCusker shows, is pervaded with Modernism, which heretically claims that doctrines come from “experience” and thus must “evolve.”

Modernists—as Pope St. Pius X warned—hold that “truth is no more immutable than man himself, since it evolved with him, in him, and through him.”

At a pre-synodal planning seminar with Baldisseri, one young prophet invoked her sage “experience” to lament how “closed” the Church is to those with “radical” views on issues like transgenderism. In other remarks published by the Vatican, she extolled a fourteen-year-old who “need[ed] to create her own religion to find one that is welcoming.”

Another young prophet announced: “The pope asked us to ‘make chaos,’ that’s precisely what we’re doing.”

Indeed, Pope Francis had urged the young—specifically “agnostics,” those “estranged” from the Church, and “atheists”—to “criticize” the Church in fulfillment of Joel 3:1-2. “‘The old will dream dreams, and the young will prophesy,’ namely, with prophecies they will take concrete things forward,” he explained.

He was quoting Martini once again, for the ante-pope had dreamed all this, too. Grandiosely invoking Joel in Night Conversations, Martini presaged that the “things we are waiting for” would gust in “via the uninhibited qualities of young people.” The Church “can’t teach young people anything.” It “can only help them to listen to their inner master.” Being taught by the young is a new “pastoral principle.”

They were Martini’s “glowing coals”—“working to save the world” with their leftist politics, forging new “beginnings” with their “less inhibited approach to sexuality.” Were they “still interested in criticizing us, the Church”?

For their sake, Martini had dreamed of a pope who’d admit Humanae Vitae’s “mistakes”—a pope who wouldn’t need to retract the encyclical because he’d just “write a new one.”

In 2014 Pope Francis was asked if the Church could “take up again” the topic of contraception, for “Cardinal Martini believed it was now time.” He replied that “it all depends on how … Humanae Vitae is interpreted”—and now one of his top theologians, a Pontifical Academy for Life member, says some circumstances “require contraception” under Amoris Laetitia.

Other members of the deconstructed pro-life academy defend aborting children and say we’ve evolved past that wispy term “intrinsically evil” because Pope Francis says “time is greater than space.” The new dean of the similarly subverted John Paul II Institute—who wrote books with Martini and organized a radical “shadow synod”—sits on the commission set to “re-interpret” Humanae Vitae on the sly.

“If it gets too peaceful in the Church,” the ante-pope taught, just recall Christ’s “desire to throw a flaming torch of inspiration onto the earth.”

So once the ante-pope’s torch has burned into Humanae Vitae, burned into the very notion of intrinsic evil, the permanent revolution will blaze forward. It will show us why Martini called Luther a “great reformer” and said “you cannot make God Catholic”; why next year’s Amazon synod will crusade for married priests and women deacons; why the Germans are letting some Protestants receive the Eucharist and a respected Vaticanist says an “ecumenical mass” is being readied; why Pope St. Pius X cried of the Modernists: “What is there left in the Church which is not to be reformed according to their principles?”

Then, like some strong and ominous wind, it will sweep aside the ashes to unveil the ante-pope’s “utopia,” where everyone ends up “transparent and accepted by everyone else.” Then the prophets will cry, with the dreamer, that “the times are long gone when the Church could talk you into having a guilty conscience.” Then the sons and daughters will prophesy that—according to the logic condemned by Ven. Fulton Sheen—there is no Hell, no sin, no judge, and no judgment and so evil is good and good is evil.

Then it shall be as the old ante-pope had dreamed.

That is why we must pray and make reparation and speak out, now.

This article was originally published on Crisis Magazine and is re-published with permission.